Fear and (Jew) Loathing in Venezuela 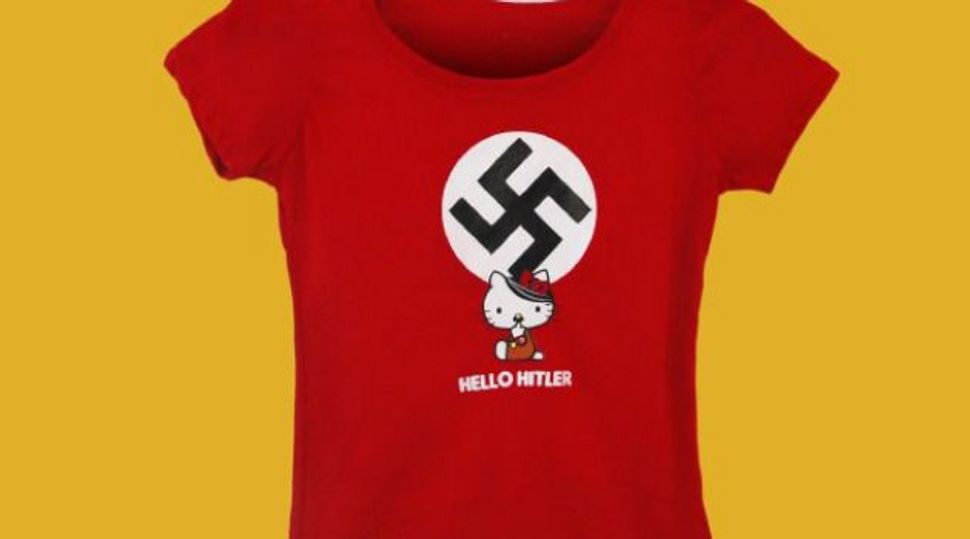 A “Hello, Hitler” shirt for sale in Venezuela

It started with the Hello, Hitler t-shirt.

Just after arriving for a month in Caracas, I saw a teenage girl on the subway wearing a snug red tee whose logo warped the familiar “Hello, Kitty” character into a cute parody of… Der Fuhrer. A giant swastika dominated the shirt, whose tagline was an obvious take on “Heil, Hitler.”

A few days later, by coincidence, I spotted the t-shirt in A Uno, a Venezuelan fashion magazine. The monthly ran an effusive spread on “super-cool” designs of Fuera de la Caja, the company behind the tee. A Uno drew no distinction between the Hello, Hitler shirt and the company’s other hip designs (Fuera de la Caja didn’t respond to e-mailed requests for comment).

The shirt unnerved me. While Caracas is hardly welcoming to Jews — we’re still seen as somewhat alien here, despite a long-standing and established Jewish presence — I haven’t experienced overt anti-Semitism on any of my visits here. Even the anti-Jewish rhetoric that colored Venezuela’s 2013 presidential elections seemed far removed from the bustling streets of the capital.

But something feels different on this trip; I’m sensing casual anti-Semitism and seeing overt anti-Israel sentiment. And for the first time, I’ve felt uneasy as a Jew.

At a government-run bookstore downtown, the week after seeing the t-shirt, I spied “Los Protocolos de los Sabios de Sion” — a Spanish translation of the notorious literary hoax “Protocols of the Learned Elders of Zion” — next to the cash register.

When my Venezuelan partner asked about it, the clerk insisted the book was his own copy and not for sale in the store.

My partner — a lapsed Catholic — told the clerk we were both Jewish, just to see the reaction. The clerk, an unassuming 40-something guy in a baseball cap, started ranting about how Jews control the media and Hollywood, how the six-million-dead Holocaust figure was an exaggeration, and how he was actually opposed to Zionism, not Jews. He continued railing about “finding the truth through dialogue” as we inched out the door.

Another book stopped me in my tracks a few days later. In the Bellas Artes neighborhood, where dreadlocked street vendors sell everything from 19th-century dog-training manuals to vinyl copies of the “Xanadu” soundtrack, I spotted a blood-red cover with the title “Mi Lucha” — Spanish for “Mein Kampf” — and an almost childish cartoon rendering of “Adolfo Hitler,” to whom the book was credited. That the book was displayed next to “The Fault in Our Stars” and Paulo Coelho’s “Adultery” made it even more unnerving. You got the feeling the street vendor had no clue about the book’s dark historic significance.

The same day, on our way to a national textile festival inside a beautiful, modern arts complex, we emerged from the subway to see a massive “Viva Palestina Libre” mural with a keffiyeh-wearing face on one side and Hugo Chavez’s smiling visage on the other. The colors of the Palestinian flag formed the background; Chavez’s presence on the wall meant that the mural may have been sanctioned by the government of president Nicolas Maduro.

Taken alone, each of these episodes may not have bothered me as much. That they all happened within the same month-long visit shook me. I started getting chills, thinking about how anti-Semitism can start as a seed, and progress insidiously through a passive population until it becomes overt. I’m really hoping that doesn’t happen here next.

Fear and (Jew) Loathing in Venezuela