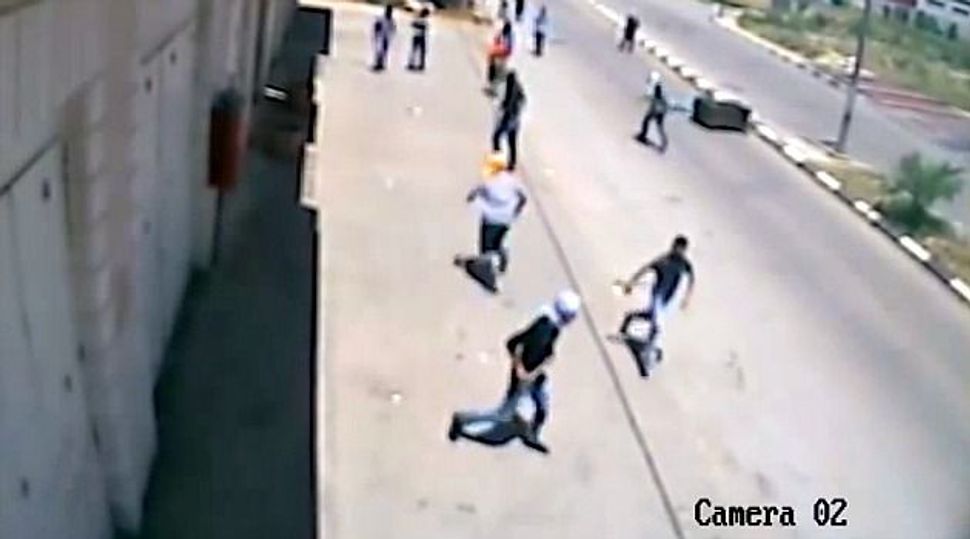 Still from CCTV footage of the West Bank killing / Youtube

The fatal shooting of two Palestinian teens in the West Bank this summer? Not faked. Not “Pallywood.” Not even close. It was exactly what it appeared to be.

On May 15, four Palestinians, three of them children, were shot in the town of Bitunya during a demonstration near the Ofer Prison. Two of them, Nadim Siyam Nawarah and Muhammad Mahmoud Salameh, both 17, died of their wounds. CCTV footage of the shootings clearly showing both boys collapsing after being mortally wounded went viral around the world and was immediately met with conspiracy theories, first by bloggers and then by current and former high-ranking Israeli officials, that the shootings had been staged.

In some versions, as promoted by Rabbi Kenneth L. Cohen, director of the Vine and Fig Tree Project, a religious pro-peace organization, as well as many other prominent commentators, the boys were said to not have fallen “correctly” or in a manner “consistent” with their having been shot. Having seen many films of shootings while doing research on war crimes, I questioned the validity of such arguments in a previous blog post, noting that people fall in a variety of ways after being shot and that the footage was in no way “inconsistent” with the young men having been shot in the upper torso.

Soon after the initial conspiracy theory of staged shootings made its way around the internet, even more involved and unlikely conspiracy theories began to be promoted by prominent officials. On May 22, former Israeli ambassador to the U.S. Michael Oren, speaking on CNN, not only said that the boys had fallen in a manner inconsistent with their having been shot but stated that they may have never died in the first place. This, despite numerous interviews with the young men’s parents and the doctors who tried to save their lives and a plethora of footage of their funerals on Youtube.

While Oren and many others, including Israeli army spokesman Major Arye Shalicar, alleged that the film had been tampered with, the dominant official Israeli narrative that emerged over the following months was that no live-rounds had been fired during the incident. In different versions presented by Israeli officials, Nawarah and Salameh were said to have alternatively been shot by unknown (presumably Palestinian) shooters or killed by rubber-coated bullets. This, despite footage shot by a CNN cameraman which clearly showed that Nawarah had fallen at the exact moment that an Israeli border policeman had discharged his weapon, and despite the recovery of a bullet that had lodged in Nawarah’s backpack.

Yesterday came word that an Israeli border cop has been arrested in connection with Nawarah’s death, the bullet found lodged in Nawarah’s backpack having been allegedly traced back to his gun. Early indications are that the border policeman will face a murder charge while his commander has been charged with not reporting the incident. The full extent of the indictment and evidence against the officer remains under military censor.

Like many others watching this case over the past six months, I was frankly shocked by the development. I had figured that after the heinous murder of three Israeli teenagers in the West Bank in June, the brutal revenge-murder of an Arab boy in East Jerusalem and shortly thereafter Operation Protective Edge, which left more than 2,200 people dead in Gaza, as well as 66 Israeli soldiers and 6 Israeli civilians — that after all that, far too much blood had since passed under the bridge for such a prosecution to occur. Not to mention that going forward with such a prosecution contradicts the IDF’s own version of events and the numerous conspiracy theories promulgated by Israeli officials.

But even with everything that has happened in the past six months, the Israeli government is moving forward with the case. And that unexpected development is undoubtedly a credit to Israeli society.

That said, it will take more than the prosecution and even a conviction of one policeman for justice to be served. For that, the numerous officials in the Israeli government and media, as well as American rabbis and bloggers who accused Nadim Siyam Nawarah of not falling correctly after being mortally wounded, and who responded to images of his parents crying over his casket by screaming “Pallywood” and “actors,” must also apologize or otherwise be repudiated.

What’s more, the constant meme that any and all Palestinian suffering caught on camera is to be presumed fake until conclusively proven true by non-Palestinians needs to be called out for what it is: racism. And ultimately the Jewish community as a whole needs to weed out and eliminate the type of thinking that leads to our religious leaders tweeting that a boy seen dying on film did not die “correctly” even before his mother has had a chance to bury him.