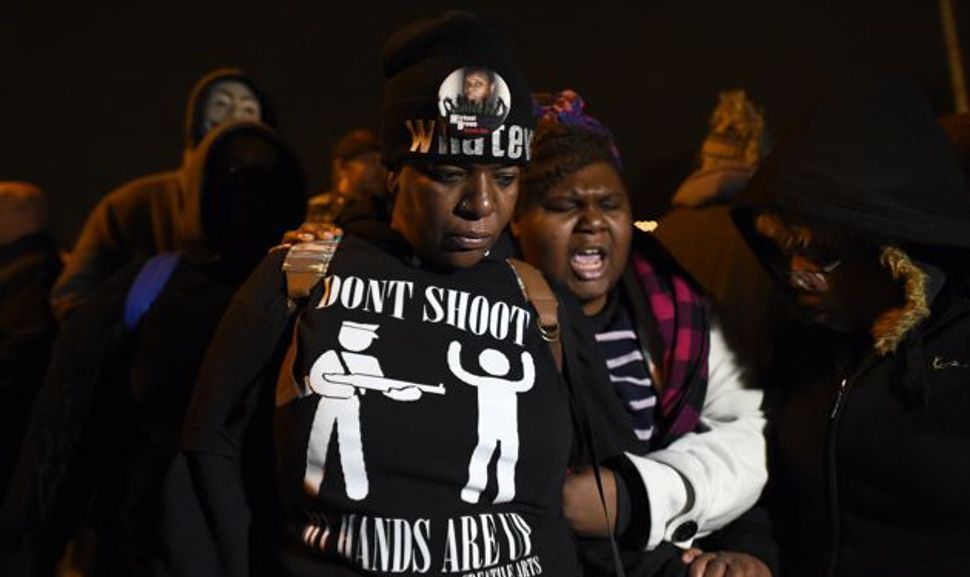 Shocked: Residents of Ferguson react to the news that a police officer will not be indicted in the death of Michael Brown. Image by Getty Images

Rabban Shimon ben Gamaliel taught us that on three things the world is sustained: on truth, on justice and on peace. But today the streets have erupted in protest — in Ferguson, Missouri, and around the country — because a clear truth, that an unarmed black teenager named Michael Brown Jr., was shot and killed in broad daylight by a police officer, has not lead to justice. And so there is no peace on the streets, because once again, black and brown youth in the United States have been shown by the system of justice that is supposed to serve all of us that their lives do not matter.

In America today, it should not be this way. All lives matter. That’s the first message the Torah gives us about human beings, when it tells us that every human being is created b’tzelem elohim, in the image of God. This should not be an abstract concept: We are all sacred; each of us is someone’s child. But I don’t think I truly understood how little these points matter in real life until this past October, when I sat in a church in Ferguson with several hundred other clergy and was asked to imagine that instead of Brown, it was my child lying dead on the ground for four hours, shot by police.

I’m the mother of two young children, and as I took part in this chilling exercise, two thoughts flashed in my mind. The first was that if as Jews we really believe that all lives matter, we are obligated to speak out against a system of violence in which someone’s child is shot by a police officer every 28 hours. And the second was that as a white parent, the reality was it would be someone else’s child. And that is a horrible truth in America today. Every parent has a right to a world in which his or her child can grow up in safety, and every parent certainly has a right not to fear that the police will be the ones who violate that safety.

Much of the media coverage following the decision of the grand jury not to indict the officer, Darren Wilson, has focused on the unfortunate violence and looting of a small number of protesters. This is a distraction; when faced with yet another example of why their lives matter less than other lives, we are asking the oppressed to be nicer in their response. Rather than pass judgment, it is critically important that we listen to what the protesters are saying.

Anger on the part of the community is justified. We would be angry, too, if our youth could be shot by police with no consequences at all. As Jews, we have a duty to engage with the systemic concerns about police violence and accountability that the Ferguson protesters have been raising since Brown was killed this past summer. We must stand in solidarity with those echoing the prophetic call of Malachi: Have we not all one parent? Has not one God created us?

We can’t wait for moments of crisis to speak out. Last summer, as Rabbi Susan Talve of Central Reform Congregation. in St. Louis, stood on the front lines with protesters, she reminded all of us that she could engage in this struggle for justice — for better wages, for better schools, for an end to the cycle of poverty — precisely because she had already been showing up. The relationships they built through shared struggle meant that when violence came to their community, they could not stand idly by the blood of their neighbors. As Talve wrote: “This is personal for the Jewish community because these are our children…. Our work is to move the margins to the center…. We will use what we have to be part of the solution.”

What does that solution look like for the Jewish community as a whole? In her “Prayer for Ferguson,” rabbinical student Sandra Lawson issues us a challenge: “We are commanded to not harden our hearts or shut our hand against our brothers or sisters who are in need. These men who have died are part of us; they are our brothers. The people protesting in the streets of Ferguson are our brothers and sisters. They are part of us, and part of our community. We must speak out to stop racial profiling and we must rid ourselves of the myth that what happens in Ferguson or on the streets of our own cities doesn’t affect us.”

As young people of color continue to die at the hands of police, those of us who do nothing cannot pretend that our failure to engage is benign. A midrash teaches that we say to ourselves in times of action: “’What have the affairs of society to do with me? Why should I trouble myself with the people’s voices of protest? Let my soul dwell in peace!’ — If one does this, they overthrow the world.”

Our commitment must be to build a new world of kavod habriyot, human dignity. In a video released in early November by Hands Up United, one young activist declares, “I don’t want to see a better tomorrow, I want to see a better forever.” That is the promise we must make, for our children and for everyone’s children.

Rachel Kahn-Troster is the director of programs for T’ruah: The Rabbinic Call for Human Rights.