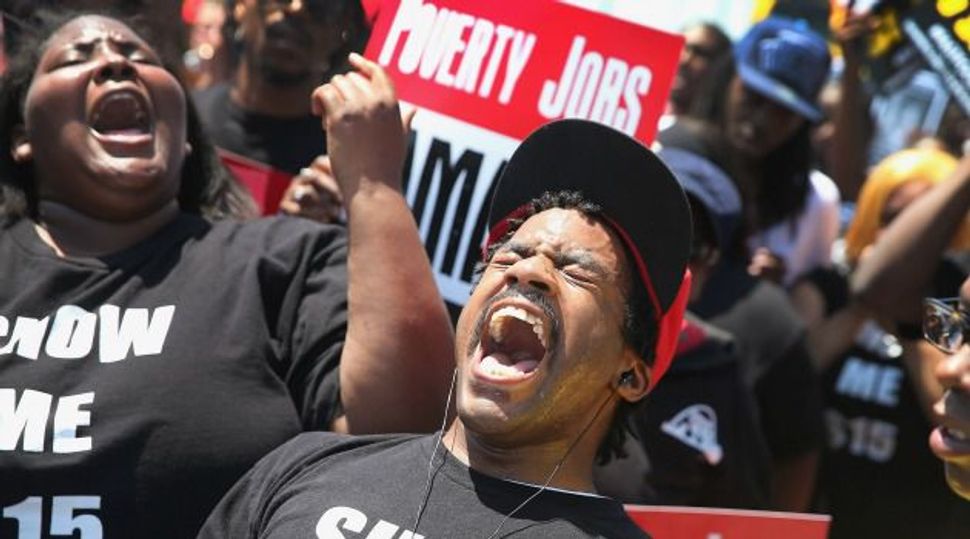 You may have heard about that huge wave of labor protests that swept across the country on December 4. You know, the one-day surge of strikes and rallies in about 190 cities (!) by low-wage workers — fast-food, home healthcare, chain-store and airport employees, all demanding a $15 hourly wage, all complaining that their industries’ pay scales leave full-time workers in poverty. The New York Times called them “the largest labor protests in the nation in years.”

You didn’t hear about it? Not surprising. The Times and Washington Post stuck it inside, in their business sections. The PBS NewsHour gave it 21 seconds. The network news shows didn’t even mention it.

In a way, it’s understandable. The labor protests came one day after the Staten Island grand jury’s decision not to indict a cop in the choking death of an unarmed black man, Eric Garner. The Garner ruling, in turn, came just nine days after another grand jury decided not to indict another cop in the killing of another unarmed black man, Michael Brown, in Ferguson, Missouri.

The non-indictments set off a tidal wave of furious protests, dominating headlines and water-cooler conversations for weeks, eclipsing most other news. They spotlighted racial injustice in a way that hasn’t been seen in years.

How frequent are these police killings? That’s astonishingly unclear. Most of the nation’s 17,000 police departments don’t keep track of officer shootings. Those that do, frequently don’t inform Washington. The FBI tries to keep a national tally — it figures an average of about 520 police killings per year — but can only guess the racial breakdown and armed-vs.-unarmed question. The closest to a sensible estimate came from political scientist and MSNBC host Melissa Harris-Perry. She said police kill unarmed black men “more than twice a week,” or just over 100 times per year. If that’s correct, it’s appalling.

What does this have to do with wage protests? Start with this: Poverty kills, too. And like police shootings, it targets the weakest.

But unlike police shootings, the number of deaths from poverty isn’t a mystery. There’s considerable research on it, from places like Columbia University, the University of Chicago, the Social Security Administration and the Centers for Disease Control.

The most straightforward figure comes from a 2011 Columbia University study: 291,000 a year.

To borrow a phrase from the Ferguson protests, where’s the outrage?

By way of comparison, heart disease, America’s top killer, causes some 600,000 deaths yearly, one in four total deaths, according to the CDC. Next comes cancer at 575,000. Respiratory disease is third at 143,000, followed by stroke and accidental injury.

Tobacco is in a slightly different category. It’s described as a “preventable cause of death,” responsible for a cluster of fatal ailments. The CDC puts the annual death toll from tobacco at about 440,000. Poverty, at 291,000, would be second on that “preventable” list. And it is preventable. Other countries do it.

Here’s another question: Why isn’t there a Surgeon General’s warning on the McDonald’s job application?

No, poverty doesn’t kill the same way a bullet does. It’s not as direct, intimate or final. Like smoking, it causes a host of secondary conditions that may eventually kill you. Conditions like poor nutrition, poor sanitation, environmental poisoning, relentless stress, poor access to emergency services and lack of basic health literacy. Conditions you rarely face if you aren’t poor.

Columbia studied the toll via epidemiology, looking at annual death statistics from various causes and teasing out mitigating factors like income, age, residence and education to isolate verifiable cause and effect.

Other researchers use demography, comparing life expectancy among various income groups. The poor die sooner. “The close relationship between socioeconomic status and mortality — the flip side of longevity — has been long observed and is well documented,” the Congressional Budget Office wrote in a 2008 report.

What’s most telling is that the longevity gap between richer and poorer Americans rises and falls in lockstep with income inequality. Both gaps narrowed steadily from World War II until around 1980. Both have widened steadily since then.

The cause of rising inequality since 1980 is a matter of lively, mostly partisan debate. Conservatives, when they admit it exists, blame it on inexorable forces of technology and globalization. Liberals agree but add other factors that reflect policy choices: shifting the tax burden from the wealthy to the poor (lowering the top income tax rate and raising payroll taxes); cutting government aid to the needy; eliminating workers’ bargaining power by crippling unions; deregulating business to permit gutting pensions, squeezing wages, unlimited CEO pay and more.

Our right-left argument looks different when you compare America with Europe. Germany and Scandinavia face the same changing technology and globalization, but they haven’t experienced our soaring gaps in income and life expectancy. That’s because they didn’t adopt our tax, labor and deregulation policies. True, we had stronger growth. But most of it went to a few folks at the top. For most, life has gotten harder, and shorter.

One question remains: Why did we let this happen? In particular, why did the white working class shift its vote en masse to the party of big business?

It’s popular to blame the 1964 Civil Rights Act. President Johnson famously said he was signing away the Southern vote for a generation. Nixon supposedly cashed that check. But the shift began much later than expected, and it’s lasted far, far longer.

Thomas Frank’s acclaimed 2005 book “What’s the Matter with Kansas?,” a bible of the Democratic left, depicts that state’s economic devastation in the last generation and claims Kansans brought it on themselves by letting Republicans bamboozle them. He says Republicans seduced the middle class into voting against its economic interests with “hallucinatory” warnings that Democrats threatened its moral and cultural values on issues like guns and abortion.

What Frank doesn’t admit is that the warnings weren’t hallucinatory. Progressive cultural change is as essential to the Democrats’ activist base as cultural conservatism is to the Republicans’. That’s the hidden secret of the 1960s and their continuing political impact. The old New Deal coalition put economy first. Minority rights were brought along behind, slowly but steadily. Post-1968 liberalism put minority and “identity” rights out front, along with a broadly bohemian cultural ethic. Workers’ rights were an afterthought at best.

Democrats still claim they want to improve the majority’s economic lot, but they want just as much or more to improve its backward cultural values. The majority takes a look, sees it’s being insulted and walks the other way. Big surprise.

Here’s the result, two generations later: Workers are poorer, abortion rights are evaporating and blacks are afraid to walk down the street.