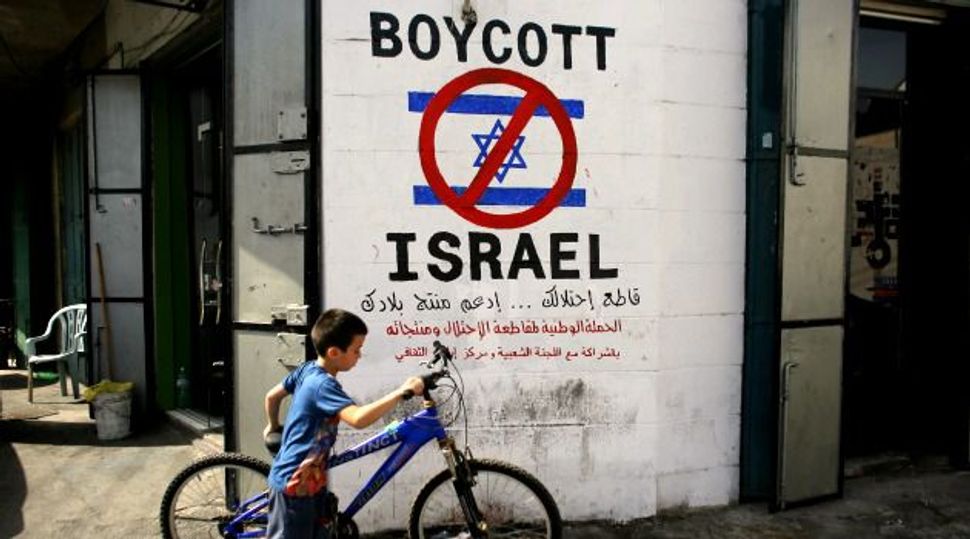 On December 10, UAW 2865, the union representing 13,000 University of California graduate student workers, announced that a resolution to align with the Boycott, Divestment, and Sanctions (BDS) movement against Israel had passed a membership vote. This is the first American union to join the BDS movement, and the outcome is deeply upsetting to many Jews, Israelis, and non-partisan opponents of one-sided boycott and divestment tactics.

For some, it might be tempting to argue that UC students, especially the Berkeley and UCLA students that made up the majority of the vote, are instinctively anti-Israel and that this fight was hopeless. I would advise against that defensive line of reasoning, convenient as it may be. I believe that there are three primary — and remediable — reasons we lost.

First, this was hardly a fair vote. The same union leadership first staked out its clearly partisan position in a one sided pro-BDS statement and then oversaw the voting process to support it. Nearly all materials sent out to membership strongly advocated a yes vote, and little space was given to the opposition. If you were not already a member, to vote, you had to join a union that had already made clear its vision of Israel as a “settler-colonialist” state. BDS supporters were also able to use an already mobilized base of union members and leaders to swing the vote their way. BDS opponents were fighting an uphill battle to both mobilize a new base and to convince ambivalent or uninformed union members.

Second, the BDS movement has a much easier narrative to sell: Palestinians are suffering, we must do something to help them, and you can do your part by boycotting a country thousands of miles away — at no personal cost. BDS is allied to a popular mode of social critique in which there are only two sides to the global struggle for social justice — oppressor and oppressed — and Israel is viewed as very much the former.

The progressive pro-Israel side has a more complex argument — yes, Palestinians are suffering, but BDS is not the answer, as you can see if you read these various policy papers — and that’s not an easy sell (although we certainly did our best). What we really need, however, is a clear statement that provides a viable alternative path to ending the Palestinian-Israeli cycle of suffering. Mainstream Israel advocacy is not helpful in this debate because it tends to cede the space of criticism of Israel entirely to radical anti-Zionism like BDS. But in the weeks I spent reading the various statements by progressive Jewish and pro-Israel intellectuals, I found none that provided a clear and compelling argument that took the BDS movement seriously. This is a serious oversight, and it highlights the need for Jewish intellectual support in combating BDS.

Third, and most importantly: We lost this vote largely because of apathy and poor mobilization on the part of the very individuals and institutions most committed to Israel. The support we needed most was in mobilizing the many professional and STEM students who were deeply opposed to the resolution, but did not even know they could vote, or if they did, did not take the union seriously or did not want to legitimize it by voting. Pro-BDS advocacy and votes came overwhelmingly from a small number of humanities and social science departments, and comprised a tiny percentage of the actual number of students who were eligible to vote. If we could have turned out even a small percentage of the (much larger populations of) STEM and professional students who opposed this resolution, it might have easily swung the other way. But to mobilize those students, we needed volunteers, and those were remarkably hard to find. There was a small group of students who dropped everything and worked on this full-time for days or weeks, but there was a large and mostly silent majority that did little to contribute.

This kind of grassroots mobilization requires serious organization, of the kind the union has built up for years. If we want a different outcome in the future, we need to pro-actively build a campus-based grassroots Israel advocacy movement that specifically addresses the challenges of BDS, and that builds off the already established Jewish groups and organizations on campuses. This will take more than just good planning, though. The current lack of effective organized Jewish opposition to BDS stems in part from individual and organizational paralysis, but also from fears of taking a political stance that might alienate others. During the months of campaigning, virtually none of the Jewish campus organizations at Berkeley would even make a statement about the resolution.

Perhaps the most painful experience of this entire campaign was the day of the vote. During a full day of canvassing the Berkeley campus, not a single member of any Jewish organization showed up to express support. Let me restate: on the day that the first American union voted to align itself with a movement dedicated to the boycott and isolation of the state of Israel, Israel’s advocates were nowhere to be found. Standing at the “Vote No on BDS” table with our small group of volunteers was one of the loneliest experiences I have had since coming to Berkeley.

Many students and organizations are hoping that BDS will remain marginal, but hope isn’t an effective strategy. Here is what opponents of BDS — from AIPAC to J Street — need to understand. Organized Israel advocacy at this time focuses largely on established politicians, who are completely irrelevant here, or appeals to right-wing supporters, who are not voting in union elections. But BDS takes a grassroots approach, shaping the opinions of the next generation of leaders on college campuses across the nation. Dismissing BDS as marginal or anti-Semitic is not a convincing response, especially as it draws on a small number of Jewish supporters. As of now, there is no progressive organized grassroots movement to oppose it. If we want to fight this spreading wave of anti-Israel activism — if we want to make an argument for a lasting peace that recognizes Israel as a legitimate state — we need to figure out a way to effectively organize to that end.

Let us be clear. The BDS movement just earned the support of its first American union, representing graduate student workers at some of the best research institutions in the US. When the next battle begins — and it will, and it will only get worse — we should be ready to defeat BDS on its own turf: through grassroots organizing and clear, pro-peace messaging that highlights the destructive and discriminatory nature of the BDS platform. In the coming months and years, Jewish organizations and individuals must articulate and implement a compelling, fearless response to BDS. Now is the time to make that happen.