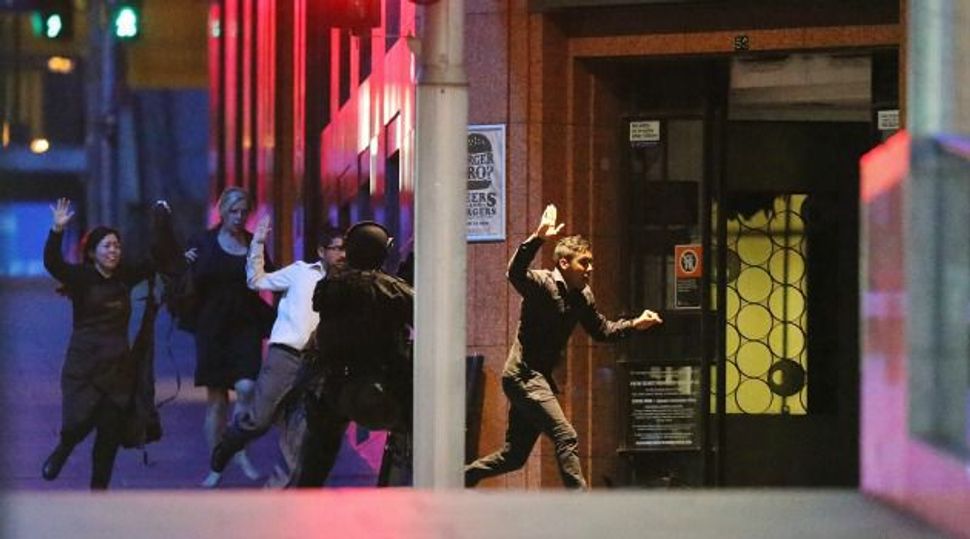 People run with hands up from the Lindt Cafe during a hostage standoff in Sydney, Australia / Getty Images

My ears perked up when I heard the news about a potential terror attack at the Lindt Chocolat Cafe in Sydney. “Potential” terror attack, because for a while the nature of the situation was unclear. And then came the now-familiar black flag with white Arabic lettering, and what was murky became just a tiny bit clearer.

For some reason, my thoughts went to what this moment must feel like for the average Muslim living in Australia. Or in London. Or in my own New England city. Because that is an emotion I recognize. Though they had nothing to do with the crime, I imagine that these Muslims experienced that all-too-familiar feeling, that gnawing fear deep in the stomach, that in my house is called, “Oy. Not good for the Jews.”

No Jew who has even a passing connection to community can credibly deny it. When something bad happens, you sit and wait, listening to the radio, watching the news, refreshing the screen. And then, they say, we can identify the attacker, name the criminal. And the name flashes across the screen. You read it and think, “Thank God that’s not a Jewish name. Could that be a Jewish name? Oh man, that’s a Jewish name.”

On one level, of course it’s utterly ridiculous that the actions of a complete stranger could reflect on me as a person. But the truth is complicated. Because no matter who I am or what I do, there will always be people who associate me with the bad apples. And maybe, in some small way, they have a point.

#illridewithyou is trending as a show of support for Muslim Australians after #sydneysiege http://t.co/zcDEvgFHkI pic.twitter.com/57RlfV1Ir7

Do I bear responsibility for Ivan Boesky? For Bernie Madoff? Well, of course not. Except that I take advantage of Jewish institutions funded largely with money made by Jews in finance. Should the Jewish community as a whole have the burden of asking more questions about the ethical (or not) nature of the system that is the engine of so many of our organizations? Possibly.

As a vocal Zionist, should I take the blame for the actions of Baruch Goldstein or Yigal Amir? Certainly not. Though perhaps we need to examine what it is about Zionism that these men imagined justified their barbaric actions. Are they aberrations, or were they a natural, if extreme, outgrowth of their ideology?

As a religious person whose sons walk through the world with a kippah clipped to their heads, do I bear the blame when religious Jews behave appallingly? When sexual abuse is swept under the rug? When fraud is committed in the name of Torah? I do not condone these acts. But is it at all possible that there is something about religious Judaism that makes these crimes easier to commit? Do our insular communities breed secrecy? Does an “us and them” mentality create an environment in which crimes against the state seem just a touch beside the point?

These are the kinds of questions Muslims around the world might be asking themselves this week. Again. And they may be right to ask the questions. But they are also right to look you in the eye and say, “I’ve condemned the last 20 attacks by Muslims. I’ve made my disgust clear and unambiguous. I am exhausted from apologizing for the bad behavior of others. When will I have to stop proving my loyalty? Why don’t whites in America have to constantly apologize for Newtown, for Japanese internment camps, for slavery?”

I so empathize with that frustration. And I identify with so many Muslims around the world, whom I will never meet, who live their lives in the shadow of those who commit hideous crimes in their names.

There’s a trending Twitter hashtag that appeared overnight, #IllRideWithYou. Australians are offering their company to Muslims who are afraid to ride public transport after the day’s events. That kind of everyday beauty can outshine a thousand radicals holding up signs on CNN. If we let it.