Israel Never Would’ve Killed ‘The Interview’ — So Why Did We? 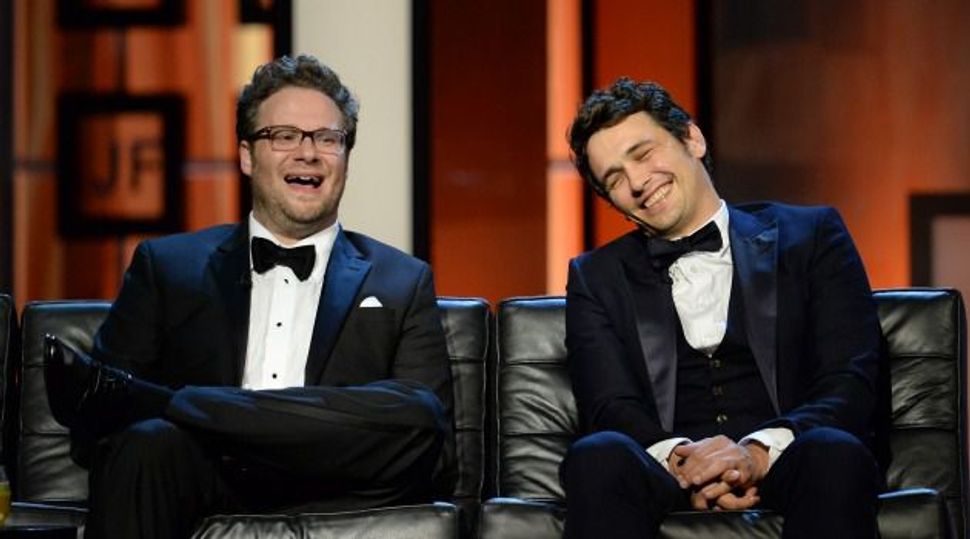 As a liberal, I generally find American culture to be on testosterone overload. On average, we are a macho, gun-toting, exceptionalist nation that prizes its cowboys and cops. Generally speaking, this is more true the more conservative a place you’re in, but it permeates the culture, with its exhortation to “man up” and its denigration of anything “soft.”

Which is why I find myself so puzzled and exasperated by the pathetic behavior of the country’s four largest chains of movie theaters, which caved into hysteria and fear in declining to show the James Franco/Seth Rogen comedy “The Interview.” It was in response to their actions that Sony pulled the film, handing the small state of North Korea an undeserved victory over a supposed superpower.

There were no credible threats to moviegoers, and indeed, no official public government assessment of the threats that were out there at all. Even assuming the North Korean dictatorship was behind the hacking of Sony’s pathetically insecure computer networks, there’s a big difference between hacking and gas attacks.

As readers of this publication know, I also tend toward the peace camp when it comes to Israel. I am not quite a dove; on the contrary, my colleague J.J. Goldberg and I have commented many times in these pages that Israel’s strongest defenders, including most of its highest-ranking generals and intelligence chiefs, support very different policies from the ones the present government has pursued. They, and we, have also noted that Israeli protestations of masculinity and strength — indeed, the Sabra doth protest too much — are often disastrous for Israel’s own security.

But let’s get real. Would this fiasco ever happen in Israel? No way. Israel faces far graver security threats than this every single day. Yet the cafes and movie theaters are open. Even after they’re bombed, they reopen. Israel has long recognized that to cower in fear is to hand terrorists precisely the victory they are seeking. It has also learned to sift credible threats from bluster. When Israelis run to bomb shelters, clear intelligence is behind them.

America could learn a lot from Israel.

In contrast to a country living, going to work, and going to the movies in the shadow of very real terrorist threats, America’s leading theater chains have acted like startled little birds, fleeing and squawking when they hear a loud noise.

And on the basis of what, exactly? A couple of veiled threats from God knows who about 9/11. We don’t know if they emanated from North Korea. hey may have come from some kid with a tablet.

Worse, this act of cowardice, which has international consequences, is mainly the work of lawyers. According to a report in The New York Times, the owners of the chains — Regal, Cinemark, AMC, and Carmike — were spooked by the threat of lawsuits. Ever since the theater shooting in Colorado in 2012, they’ve been saying that violence is not foreseeable in movie theaters. But how could they not foresee an attack like this, when, after all, someone sent an email?

According to that same article, the mall owners were worried too. What if the threat of terrorism kept terrified suburbanites away from shopping?

Pathetic. In Israel, people go to malls davka, on purpose, because of threats. Of course, when there’s a war on and rockets are falling, they’re not foolish. But I lived in Jerusalem during an intense period of terrorist attacks. People may have avoided some open spaces, but they didn’t stay home and quake.

Nor can the blame be laid at the doorstep of Sony. To be sure, the Japanese company (and Japan in general) has much more to fear from North Korea than we in the United States do. And if you’ve been following this story, you know that Sony’s top executives did demand that “The Interview” be watered down a bit.

Not only did Sony not pull the film, however, but other studios have complained that they didn’t do enough to stop it. The theater people are blaming Sony, in fact, for not yanking it sooner. That’s right — precisely the company with the most credible reasons to fear North Korean action is the one that didn’t do enough to cave to it.

Maybe it’s because they know the costs of cowardice.

I don’t mean the film’s $44 million production cost and $35 million marketing budget. I mean giving in to a nation being systematically starved by a totalitarian state, where dissidents are tortured in concentration camps and brainwashing is official state policy, implemented every single day. A nation that apparently led by a maniac, and which should be no match for the United States, and isn’t.

Israel is worried about showing weakness in the face of a credible nuclear threat from a nearby theocracy. America just showed weakness in the face of unsubstantiated bluster from a country of 25 million halfway around the world. We talk a macho game, but when the rubber hits the road, our public culture runs for the hills — just like we did from Ebola (remember that?) and SARS and swine flu and various diseases I can’t even remember.

And, lest we forget, this was also a case of artistic freedom. Of course, if there are credible threats of violence, the state and private actors must do what is necessary to protect public safety. But this was more a case of jittery mall-owners and worrywart lawyers — and the casualty was the very idea of free expression.

Of course, “The Interview” is not exactly high art, at least, judging from its trailer and the comments of critics who have seen it. But artistic freedom matters regardless of artistic merit. I defended “The Death of Klinghoffer” in these pages recently, I defended the Sensation exhibit at the Brooklyn Museum, and I defend “The Interview.” None are perfect works of art; indeed, all have serious flaws. But we’ve let a totalitarian state impose its values over ours.

There are worse crises in the world than Sony canceling a dumb comedy. But when unsubstantiated threats can make the world’s supposedly greatest democracy cower in the face of the world’s worst totalitarian regime, it’s fair to wonder about our core values, and whether we possess the kind of strength that runs deeper than rhetoric. This is a moment of national shame.

Israel Never Would’ve Killed ‘The Interview’ — So Why Did We?