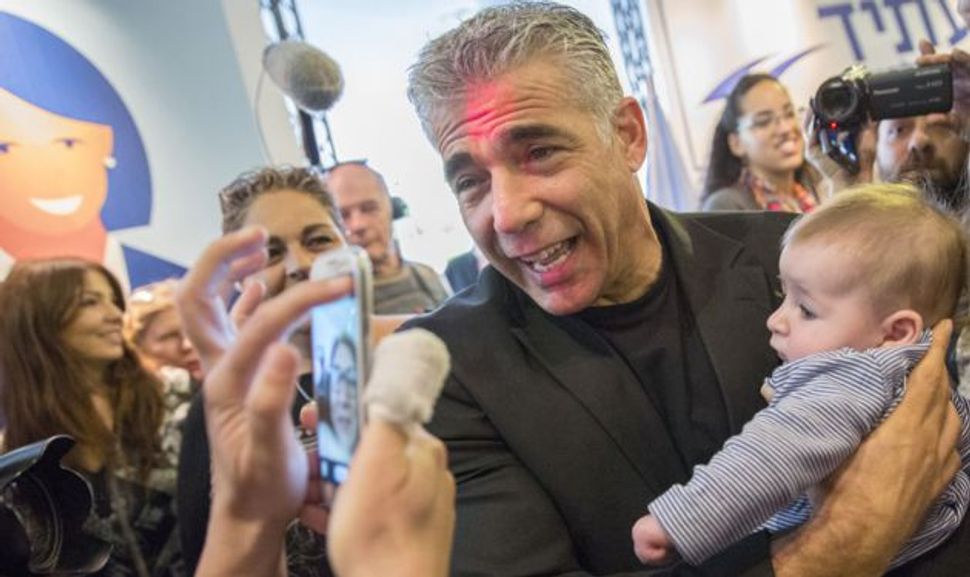 Israel’s snap parliamentary elections are just three months away, but the campaign is still stuck in the doldrums. You might call it the silly season. The parties in the outgoing Knesset have received their first round of public campaign funding and started flailing away at each other, but nobody knows yet which ones will be on the ballot March 17, nor what names will appear on their tickets or what the platforms will offer.

Most years the lineup would be clear by now. This year is different. As the January 29 deadline approaches for registering tickets with the elections bureau, parties are dividing and recombining like amoeba in a stagnant pond. Labor Party leader Yitzhak Herzog kicked off the round-robin December 10 with his announcement of a joint ticket with Tzipi Livni. The pairing boosted Herzog from a distant third in the polls to a narrow lead. He’s since settled into a dead heat with Prime Minister Benjamin Netanyahu. They’re each running at 22 to 24 seats in the 120-seat Knesset, depending on the day and the poll.

As of now, therefore, the choice Israeli voters will face looks pretty much like the one they’ve faced repeatedly for nearly four decades, between a closely matched right and left, led by Likud and, usually, Labor. If the polls hold steady — a big if — then the real game will begin after the election when the two main parties vie to woo smaller parties into a coalition. Complicating things, the main parties are smaller than ever, which complicates coalition-building.

Traditionally the largest party after an election gets the first crack at trying to assemble a coalition. Not always, though. In 2009 the incumbent Kadima party, led by Livni, bested Netanyahu’s Likud by one seat. But Livni couldn’t find enough partners to govern. Netanyahu could, so he got the job.

Four years later, nearing the 2013 election, Netanyahu was running sluggishly in early polls. He grabbed a lead by combining his ticket with Avigdor Lieberman’s Yisrael Beiteinu. The combination gave Netanyahu a comfortable lead and another term.

This year, what was Netanyahu’s 2013 electoral gimmick has become the new normal. Following the success of the Herzog-Livni matchup, virtually every faction is in some sort of merger negotiation, though most deny it. It’s making predictions of Israel’s next prime minister next to impossible.

The most dramatic move so far has been in Shas, the Sephardic Haredi party. It’s been a member of every government since its party’s founding in 1984, under Likud and Labor alike, until the latest Netanyahu government excluded the Haredi parties at Lapid’s insistence. Internally, though, it’s split between diplomatic moderates under chairman Aryeh Deri and rightists under former chairman Eli Yishai. On December 15 Yishai announced he was leaving to form a new party. Polls show Deri and Yishai at 4 seats each. That’s 4 more guaranteed seats for a Netanyahu coalition and 4 fewer for Herzog.

Yishai could be in trouble, though. He planned to join forces with settler leader Uri Ariel, head of the far-right faction in Naftali Bennett’s Jewish Home party (yes, there is such a thing). Ariel has one foot out the door. Together, Yishai and Ariel would form a powerful new bloc. Polls show them winning 7 seats. But that’s apparently hit a roadblock. Yishai’s religious mentor, Rabbi Meir Mazouz, won’t allow women candidates. That would rule out a key Ariel ally, Hebron settler Orit Stroock.

In the center, Yair Lapid, the Cinderella neophyte who took second-place in 2013 with 19 seats, is now polling at 9 seats on a good day and seems desperate for a partner. He had hoped to join with Livni, but he had little to offer her. Persistent rumors, denied by both sides, now say he’s been negotiating with this year’s star newcomer, ex-Likud-turned-independent Moshe Kahlon. It’s even said that Lapid offered to take second place on a merged list. Kahlon, though, is playing hard to get.

Kahlon has also been talking to Lieberman, a more comfortable match given their shared roots on the populist right. They’ve signed a limited post-election cooperation agreement. But Lieberman insists, at least so far, that his party is running independently.

Kahlon has every reason to want a partner. As a new party without representation in the current Knesset, he’s not eligible for generous public funding. New parties often borrow from the banks, hoping to repay from their Knesset budget. But Kahlon favors breaking up big banks. They won’t rush to help him. It’s unclear how long he can evade Lapid’s embrace.

Besides, he’s having trouble recruiting candidates. He postponed a promised announcement of his slate in mid-December. The latest word is that he’ll announce first names “soon” and the rest January 29. Several prominent figures identified as his top choices turn out to be negotiating with other parties — economist Manuel Trachtenberg with Labor, retired general Yoav Galant with Likud and Haredi educator Adina Bar-Shalom, daughter of Shas founder Rabbi Ovadia Yosef, publicly endorsing Deri.

It wasn’t supposed to be this complicated. When Netanyahu fired two key ministers December 2 and called for early elections, two years ahead of schedule, his Likud party was running well ahead in the polls. Together with his natural allies on the right, including Lieberman, Bennett and the two Haredi parties, he assumed he’d be returned stronger than ever.

True, polls also showed that just a quarter to a third of voters saw Netanyahu as the right person for the job. But here, too, everybody else trailed far behind. Reelection seemed inevitable.

What he didn’t notice was that those polls were showing two-thirds or more didn’t want him in charge. Nor did he realize the depth of hostility toward him among politicians in the center, where a coalition must be built. None have ruled out joining a new Netanyahu government. But they emphatically haven’t ruled out Herzog, either.

Part of his problem is personal relationships, but partly it’s substantive. Past contests pitted a right that favored expanding settlements against a left that theoretically favored a peace agreement but had no negotiating partner. Now much of the Israeli center-left, including most of the military and intelligence community, believes there’s a partner and regional deal within reach. So does the outside world. Netanyahu is widely seen, at home and abroad, as resisting serious talks. That’s a key reason for the rise of boycotts and Palestinian statehood resolutions. The other reason is a well-oiled Palestinian pressure campaign.

Likud spokesmen blame the left for fanning Palestinian radicalism and fueling Europe’s blame-Israel attitude. Livni and Herzog blame Netanyahu. That’s not surprising. Lieberman has been saying similar things, which is surprising. Lapid hears it from his advisers. Kahlon has been hearing it in conversations with experts. Nobody wants to run on a peace platform, because the public is suspicious. Instead the attacks on Netanyahu become more personal, and venomous.

Personal or ideological, the bottom line is a political map that would just as soon see Netanyahu gone. If he’d foreseen all that, he probably wouldn’t have called elections.