The High Cost of American Inequality 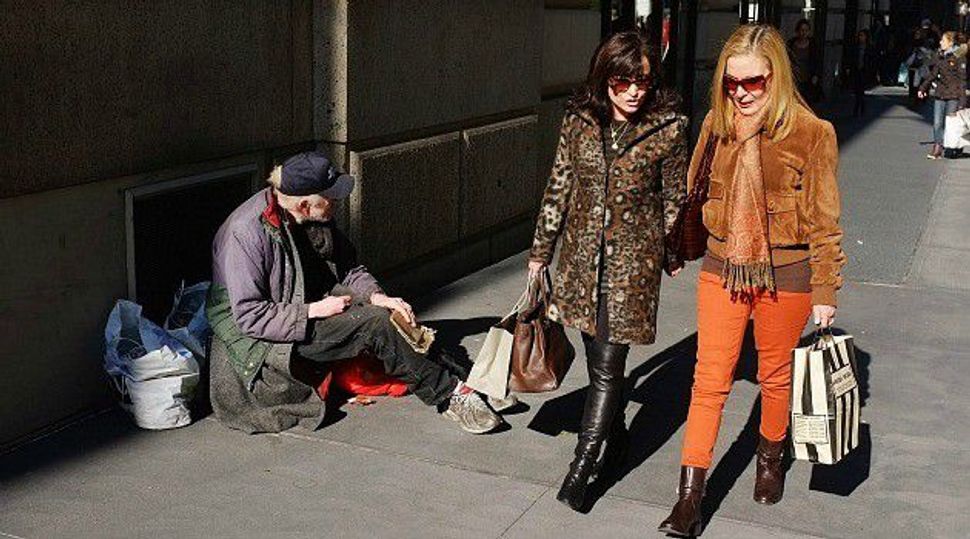 In the closing days of 2013, President Obama gave a speech in which he declared that the growing gap in income and opportunity in America is presenting “the defining challenge of our time.” So intent was he to make the point that he repeated the word “inequality” 26 times in one 50-minute speech.

Obama’s declaration was quickly greeted by predictable pushback from Republicans eager to hurl accusations of class warfare when anyone, especially a Democratic president, pointed out the depressing truth: The gap between the very rich and everyone else in America has expanded into a yawning chasm.

Then 2013 turned into 2014. And 2014 turned into one endless, often distasteful, rarely edifying political campaign.

And somehow, the defining issue of our time was drowned out by the relentless drumbeat of wars, invasions, cyberattacks, epidemics (remember Ebola?) and other important distractions.

Time to put the issue on the national agenda again this year.

And we Jews are the ones to do it.

We are in the midst of our shmitta year, after all — the traditional sabbatical that concludes a seven-year cycle and was historically mandated as an agricultural period of rest, a time when the land was to remain fallow, debts were to be forgiven and bonded labor was liberated.

We do not suggest that the American government adapt these traditional biblical laws as modern economic policy. (Even Israel doesn’t do that.) But the values behind these laws are stunningly relevant to our time and ought to inform our approach to confronting inequality because they allow us to understand the need for individual and communal recalibration. They help answer the question: What’s so bad about extreme inequality anyway?

The hyperventilating headlines about the growing income gap — the widest since the Roaring Twenties!! — actually belie a more complicated picture. Do we measure income before people pay taxes and receive transfer payments from the government, or after? Do we include the subsidies to pay for health insurance that now come with the Affordable Care Act? What about expanded Medicaid payments? And low-income tax credits?

While economists continue to debate these questions, there is mostly agreement on some general trends: The Obama administration’s tax and health care policies have slightly increased income for the poor and more significantly reduced the income of the rich. But the gap between them is still enormous.

Beyond the income gap is the opportunity gap, the demonstrable fact that economic mobility has stalled in a country where so many people now can only aspire to it from afar. As Obama said in that 2013 speech: “A child born in the top 20% has about a 2-in-3 chance of staying at or near the top. A child born into the bottom 20% has a less than 1-in-20 shot at making it to the top.”

Or, to quote the late-night comedian and brilliant social commentator John Oliver, “wealth is dispersed as a lottery of birth.” That lottery disproportionately disadvantages minorities and newcomers of color, which is why expanding inequality strikes us as so inherently, fundamentally unfair — unAmerican, even.

But while we may feel that growing income inequality is a societal danger, sowing civic unrest, political disenfranchisement, and a host of other social diseases, the research on this issue is more equivocal. As the economics columnist Eduardo Porter noted in a smart analysis in last year’s New York Times, “specific evidence about inequality’s effects has been hard to find.”

The boldest arguments, gaining some traction in America, come from a pair of British epidemiologists who assert that severe inequality undermines social bonds and harms the health of millions, affecting not just the poor, but everyone. “Greater income inequality seems to amplify and intensify the effects of social status differentiation — bigger material differences creating bigger social distances,” one of the epidemiologists, Richard G. Wilkinson, wrote for CNN.com in 2011.

But Porter and others point out that the data show a correlation, not a cause. Is life expectancy in the U.S. lower than in other countries because of inequality, or because of the absence of universal health care? Much as it’s tempting to decry inequality as the root of America’s social diseases, intellectual honesty demands that we not pretend there’s proof when there may only be a heartfelt hypothesis.

This is where Jewish tradition elevates the conversation. (Warning to biblical fundamentalists: The text is actually quite radical.) According to Rabbi Saul Berman, a noted Orthodox scholar and thinker, the shmitta year is meant to tackle two disparities, not just one. By limiting productivity once every seven years, the law underlines the value that natural resources — the currency of wealth in biblical times — belong not to individuals but to God, and hence to the community as whole. The second point is equally important: By nullifying debts, the law limits the long-term power that the wealthy can exert over the poor and needy.

That is precisely what the severe, growing income inequality has brought to 21st century America — a culture where economic might has melded with political power so that the privileged few who control the economy are increasingly able to control the levers of government. Contrast that to the Bible, where in a delicate attempt to calibrate wealth and power, the priests who exercised enormous control through ritual were never given a share of the land.

This balance is meant to project mutual loyalty and responsibility, a trust that government (however defined) will look after everyone’s interests, without preference for rich or poor. In fact, Berman reminds us, the rabbinic system required that even the poor give charity. Sharing in service to the community is an expression of loyalty and trust; it is also a sign of shared power. This is why inequality is defining our time — because it is defining us as a nation without trust in one another and the mutual responsibility necessary to face our common challenges. Let the values of the shmitta year lead the way.

The High Cost of American Inequality