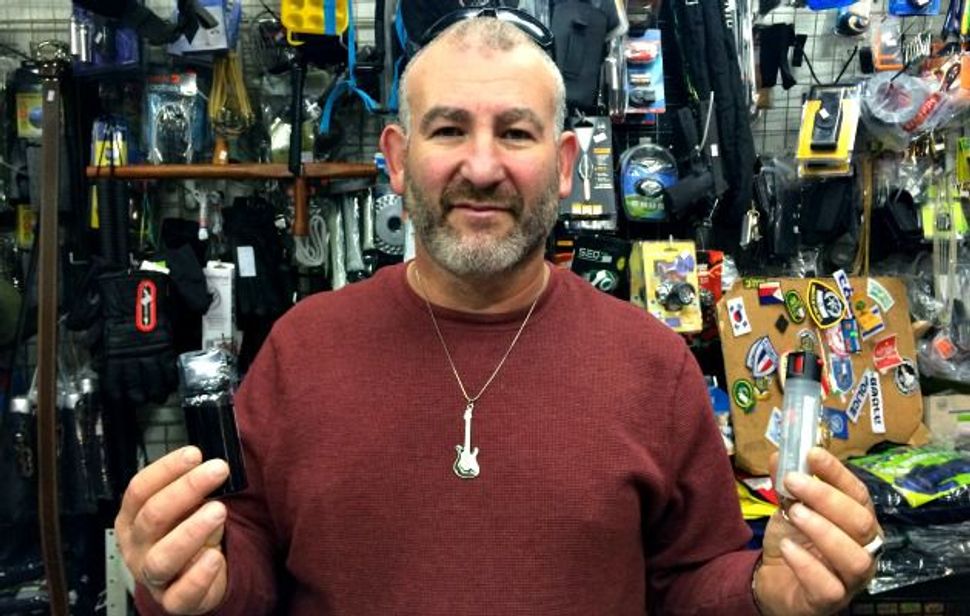 Pepper spray has become a hot commodity in Jerusalem as the city’s Jewish citizens are arming themselves in the wake of recent Palestinian attacks — and some innocent Palestinians are getting sprayed.

On Jerusalem Facebook groups, people are asking and advertising for the product, and in the city’s brick and mortar stores, sales of the spray are up. In November, a “make your own pepper spray” cooking class was even advertised on Facebook.

Yona knew a friend who was selling the spray, and he asked to get in on the business. “I figured it was a great idea, we would be making money and citizens would be able to protect themselves,” he said.

Since November, his team of four has sold hundreds of cans of pepper spray, mainly through word of mouth and internet postings. He said that sales tend to spike after an attack. His price is 70 shekels — about 18 dollars — per can, which is about 20 shekels more than the average price in Jerusalem stores. Two cans go for 100 shekels.

At Defence, an army surplus store on Jerusalem’s Ben Yehuda Street, owner Amir Schreiber said that he has sold out of pepper spray multiple times in recent months. Even though the chances of being attacked are “one in a million,” he said, carrying pepper spray makes people feel safer. Schreiber himself wears a large can on his belt at all times.

Schreiber said that customers often want to purchase a knife or even a gun — though the store stopped selling them years ago — but he recommends pepper spray instead. For one, he said, it’s easier to operate. And since pepper spray is not a lethal weapon, a person who uses it will likely not get in trouble with law enforcement. “Legally, it’s the best,” he said.

The vast majority of Schreiber’s customers are Jews, but he said that a handful of East Jerusalem Palestinians have also come in to buy pepper spray in recent months, presumably concerned about being targeted because they are Arab. Schreiber said he won’t sell knives to East Jerusalem Palestinians. Since he can’t legally turn people away, he tells them they must obtain permission forms from the police, even though no such thing exists.

With the rise in pepper spray sales, some innocent Palestinians have been targeted. In December, a Palestinian taxi driver pulled over to pick up a passenger in West Jerusalem when a man on the street yelled, “Don’t take that cab — the driver is Arab.” The driver said he wouldn’t take such an “extremist” passenger, and then the man sprayed him in the face. He had to go to the hospital for treatment. There have been a handful of similar incidents in Jerusalem.

“A lot of my customers said, ‘I sprayed myself in the face and it hurts,’” he said. “In a way, it is smart and not smart at the same time.”