‘Selma’ Got It Right by Leaving Out Jews 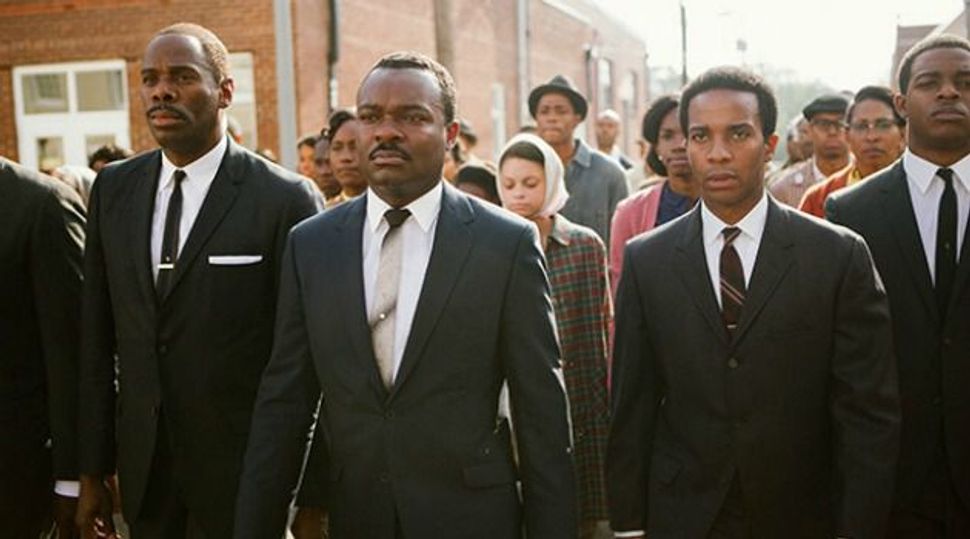 A still from the new film ‘Selma’

Leida Snow’s review of the new film “Selma” takes director Ava DuVernay to task for a “glaring omission” — airbrushing out the contributions of white people in general, and Jews in particular, to the civil rights movement. But Snow makes this critique by drawing selectively from American Jewish history, and her triumphalist narrative is more deserving of her critique than the movie is.

Snow offers a well-tread recitation of a triumphalist version of black-Jewish relations presented in synagogues and summer camps, complete with mention of Andrew Goodman and Michael Schwerner, Jewish involvement in the March on Washington, and Rabbi Abraham Joshua Heschel marching with Dr. Martin Luther King at Selma. This version animates social action in a multitude of Jewish spaces, including youth groups, Hillel-sponsored alternative spring breaks and missions to post-Katrina New Orleans. But it’s dangerous for several reasons.

First, it’s a version of history that ignores how the civil rights movement was — rightly — a black-led movement in which only a small proportion of Jews played significant roles. When Andrew Goodman and Michael Schwerner were murdered alongside James Chaney in June 1964, the death of white Jews drew Jewish attention to a movement that had long since been underway. And it’s worth pausing to ask, as a community: Had Chaney been murdered without Goodman and Schwerner, would that moment have attracted the attention that it did in the Jewish community? And if not, why?

Second, it’s a version of the Jewish past that continually emphasizes the liberal proclivities of Jews even as they moved up the socio-economic ladder. The identification of Jews with liberalism can be a source of pride, or a reason to lament. But either way, this hasty association erases the enormous amount of contestation that happened within Jewish institutions and communities over Jewish politics.

By labeling all American Jews as liberals, we sand down the rough edges of communal debates and impose a consensus on the past on issues and in places where no such consensus ever existed. In presenting the all-Jews-were-civil-rights-activists narrative, Snow’s “glaring omission” is the excising of Jewish actors who don’t fit neatly into this triumphalist narrative.

We don’t hear about Jewish involvement in racist real-estate practices through redlining and blockbusting. Or about Southern Jewish congregations who censored their rabbis for marching with African-Americans and pleaded with national organizations to leave issues of integration and civil rights to local communities. Or about Jews who, segregationist or integrationist, simply did nothing.

Perhaps more insidiously, Snow’s version of Jewish liberal triumphalism papers over the extent to which liberal Jewish organizations took conservative stances during the early Cold War. Motivated by fear, many Jewish organizations severed ties with civil rights and labor groups to mitigate against links between Jews and Communism.

Rather than dwell on how much screen time Jews lacked in “Selma,” we should pay more attention to liberal Jews versus leftist Jews, and the variety of political positions Jews took across the left political spectrum. As historian Michael Staub has argued, “Without paying close attention to intra-Jewish conflict, we have no idea how contentious these individuals’ positions within the community often were, nor of how energetically and creatively anti-left and antiliberal arguments were put forward by their critics.”

In fact, there’s a burgeoning literature on Jewish conservatism that aims to correct the automatic equation of Jews with liberalism, allowing for a truer retelling of the Jewish past and a better understanding of the Jewish present.

So instead of congratulating ourselves for the actions of a few 50 years ago, we might begin to think about how Jews can amplify black voices in the #blacklivesmatter movement and work for the rights of people of color in this country today.

It’s a shame Leida Snow missed a “great teaching moment” by selectively lionizing a handful of Jews while simultaneously airbrushing out the rest.

‘Selma’ Got It Right by Leaving Out Jews