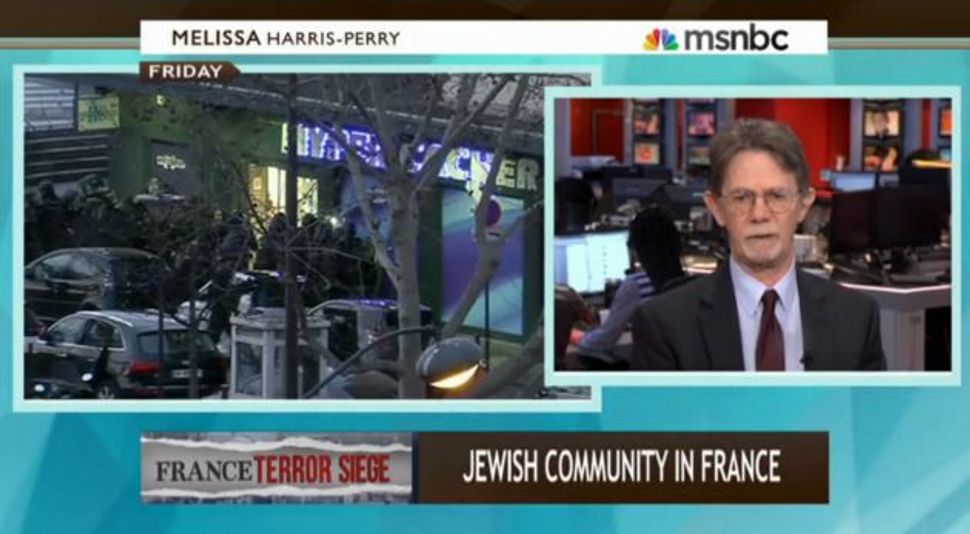 I was on Melissa Harris-Perry’s show on MSNBC this morning, talking about anti-Semitism in France in the context of the Charlie Hebdo and kosher grocery attacks this week. It was a 5-minute segment in the course of a two-hour panel discussion (which I was not part of) on the attacks, terrorism in France, free expression and the place of the French Muslim community. (You can see the whole discussion here.)

As you can see, Harris-Perry stepped in (at 2:32) and asked me flat-out to assure her that the “anti-Semitism problem in France is not primarily a problem of anti-Semitism from French Muslims.” I’m afraid I let her down. I cited Ilan Halimi, the school in Toulouse, the Jewish Museum in Brussels (attackd by a French Muslim), the mob attack on the synagogue in Paris last summer — all perpetrated by Muslims.

My explanation of the anti-Jewish outbursts by French Muslims focused on radicals wanting to participate in the Israeli-Palestinian conflict and picking on their French Jewish neighbors as surrogate Israelis. Even though that’s the general operating assumption of Israeli intelligence agencies, I think it was incomplete as an overall explanation. I was intending to expand on it and talk about the increasing presence of pure, old-fashioned Jew-hatred in various strains of radical Islamism, especially since the 1998 merger of Al Qaeda with Zawahiri’s Egyptian Islamic Jihad. But the segment ended sort of abruptly and I was told I was done, so I never had the chance finish the answer.

Incidentally, if you haven’t seen it, it’s important to check out the brief essay “The Blame for the Charlie Hebdo Murders” by the progressive war correspondent George Packer, The New Yorker’s resident expert on terrorism. He makes the case for looking squarely at the ideology of radical Islamism and “the astonishing surge in Islamist killing around the world” rather than trying to “tiptoe around the Islamic connection, claiming that the carnage has nothing to do with faith.”

The murders, he says,

are not a result of France’s failure to assimilate two generations of Muslim immigrants from its former colonies. They’re not about French military action against the Islamic State in the Middle East, or the American invasion of Iraq before that. They’re not part of some general wave of nihilistic violence in the economically depressed, socially atomized, morally hollow West—the Paris version of Newtown or Oslo. Least of all should they be “understood” as reactions to disrespect for religion on the part of irresponsible cartoonists.

They are only the latest blows delivered by an ideology that has sought to achieve power through terror for decades. …

Because the ideology is the product of a major world religion, a lot of painstaking pretzel logic goes into trying to explain what the violence does, or doesn’t, have to do with Islam. Some well-meaning people tiptoe around the Islamic connection, claiming that the carnage has nothing to do with faith, or that Islam is a religion of peace, or that, at most, the violence represents a “distortion” of a great religion. …

A religion is not just a set of texts but the living beliefs and practices of its adherents. Islam today includes a substantial minority of believers who countenance, if they don’t actually carry out, a degree of violence in the application of their convictions that is currently unique. …

Check out it out here. It’s well worth reading in full.