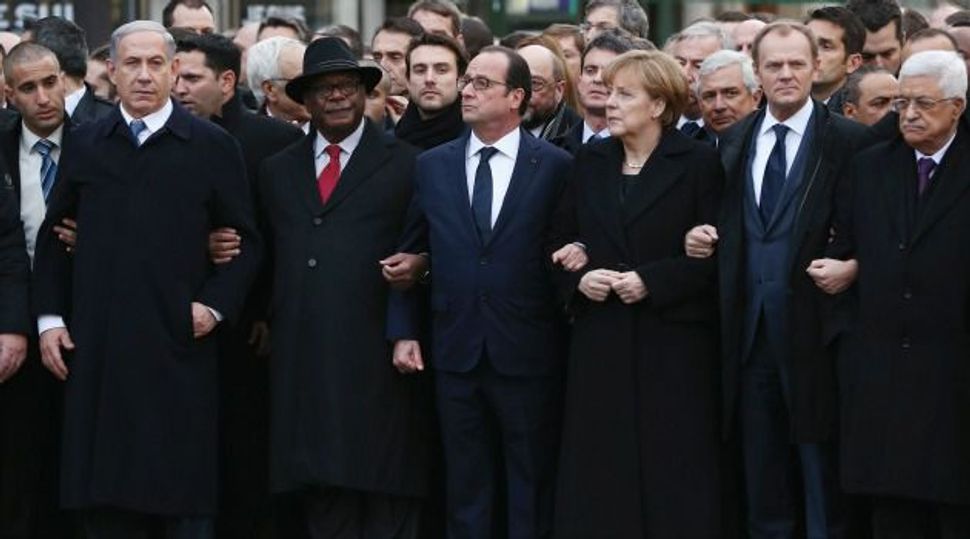 (Haaretz) — Just as you can sometimes identify Israeli tourists abroad by their loud voices, poor manners and gauche behavior, none of the hundreds of millions of people around the world who watched Sunday’s Paris rally on television had any problem locating Israeli Prime Minister Benjamin Netanyahu: smack in the middle of world leaders at the front of the marchers.

The terms that constitute guiding principles for the French people – façon and finesse – suffered their own terror attack on Sunday. There was nothing further from Parisian manners, refinement and style than the behavior of Netanyahu. Or maybe as he should now be called, Grayshirt Bibi.

Such behavior as cutting in line, sneaking onto the bus by pushing and shoving, using elbows to get to the front at some event is so Israeli, so us, so Likud Party Central Committee, that I want to shout: Je suis Bibi!

By the way, speaking of that committee, there is a technique which Netanyahu knows very well and that can be seen time after time when senior Likud officials find themselves on the same stage as the prime minister: With small, unseen ballet-like steps, these people will jockey themselves so as to be as close as possible to their leader, so that they will appear with him in photos in the next day’s newspapers.

The tales of Sunday’s “delegation to Paris” (which was bloated, of course), started as a ritual and unavoidable farce. First it was announced that Netanyahu was not going for “security reasons.” But when he learned that Naftali Bennett and Avigdor Lieberman were packing their suitcases, the security considerations vanished in a split second, the electoral considerations took over – and he was on the plane.

How the wheel turns! An event that Netanyahu almost did not participate in for reasons of his own personal security – which is dear to all of us, of course – became all at once an event that would be almost inappropriate to hold without his presence right up front.

Even before Netanyahu gave his show on the sidewalks of Paris, his party demonstrated a new record in thickheadedness when it published on its Facebook page a post proclaiming solidarity with the Jews of France, with the symbol of the Likud at the bottom. A short time later the logo was removed, and only the solidarity remained.

On Sunday, Channel 2’s Amit Segal reported that the French preferred that Netanyahu not come at all. His stubbornness led to Palestinian President Mahmoud Abbas receiving glory from all over the world by marching arm in arm with presidents, kings and prime ministers ־ right in the center of the very first row. Netanyahu had to endanger his life to reach the same central position, gently shoving the president of Mali as if he were an asylum seeker whose place was in the freezing Holot detention facility.

We must assume that Netanyahu’s show on Sunday in the march of the millions will not harm him in any way among his right-wing electorate. Maybe just the opposite: Not only are Likudniks unlikely to see Netanyahu’s behavior as reflecting Israeli chutzpah – they probably enjoyed every minute of it, and will prefer to blame the citizens of France, who it seems did not want him, of French chutzpah. Not only were Jews murdered on their soil, they dared to ask the Israeli prime minister to stay home?!?

To the left and to the right of Netanyahu marched leaders no less important and no less influential: Angel Merkel, David Cameron, Mariano Rajoy, Matteo Renzi and others. All are seasoned political leaders who have run in many elections in their own countries. But is doubtful whether any of them are endowed with the abilities or talents of Netanyahu. Maybe because they never served in the elite Sayeret Matkal army unit.

And now for another, completely different matter: While the eyes of the world were watching the dramatic images from France, the head of the Kulanu party, Moshe Kahlon, decided it was the right time to call a press conference and present the candidate for the third position on his slate for Knesset in the coming elections, Tsaga Malko. While the leader of the opposition, Isaac Herzog (Labor) was displaying proper restraint in the television studios, Kahlon, who has been accused more than once for dragging his feet, chose for some reason not to postpone his announcement.

Rather strange timing, we must admit.