How Bibi Tried To Make Paris All About Him 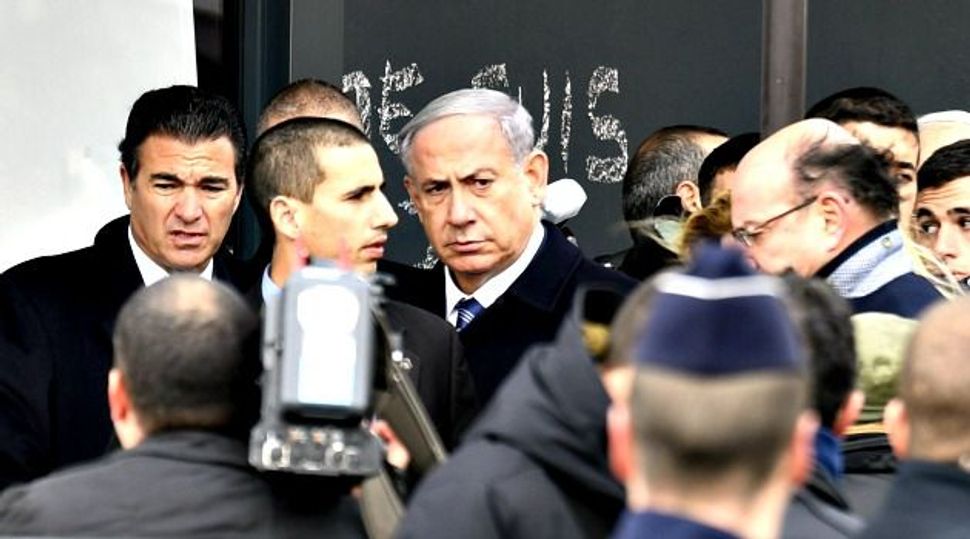 Israelis are having a hilarious time mocking their prime minister’s visit to Paris, with ironic tweets and Hebrew Facebook statuses galore.

For those who haven’t been following the story, Netanyahu crashed the national solidarity event despite President Hollande’s explicit request that he stay at home. Then, after the VIP reception at the Elysee Palace, cameras for a local media outlet caught him elbowing aside a female French minister as he tried to jump the queue for the bus that would transport the group to the starting point of the march. Finding himself relegated to the second row at the march itself, he shoved aside the president of Mali and inserted himself in the front row, one down from Hollande himself and within eyesight of Angela Merkel. 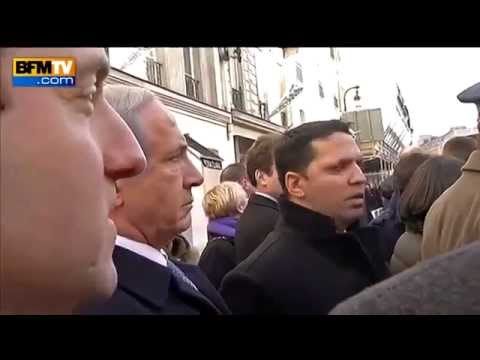 Noy Alooshe, the Israeli journalist and musician who became a YouTube sensation with his 2011 remix of Zenga Zenga (spoofing Libya’s then-leader, Muammar Qaddafi), created a new clip spoofing Netanyahu’s Paris antics. Alooshe uses the theme song for Loony Tunes to accompany speeded-up footage of Bibi pushing aside the Malian president, Ibrahim Boubacar Keitar, in order to insert himself in the front row. Perhaps the funniest part is when the Malian leader leaps away from Bibi’s touch as though the latter had a communicable disease. It wouldn’t do, presumably, for the violent Islamists in Mali to see images of the country’s president walking arm-in-arm with the prime minister of the “Zionist entity.”

Just a few leaders down the front row was Mahmoud Abbas, standing near King Abdullah and Queen Rania of Jordan. Did he and Bibi exchange meaningful glances? After all, the Palestinian leader’s presence was salt in the wound for Netanyahu, who insisted on coming despite Hollande’s request that he stay home. But Bibi got his own back: in the photograph tweeted from his official account, all but Abbas’s right ear is cropped out of the frame.

I marched in one row with world leaders in order to unite against terrorism. Any terrorism must be fought to the end pic.twitter.com/X5oFg5r3cB

The day of bad behavior was just getting started. That evening, after a meeting with Jewish community leaders (who later said they wished Netanyahu would stop telling the Jews of France that they should all move to Israel), Netanyahu gave a speech at Paris’s main synagogue. The crowd greeted him with enthusiastic cheers and listened warmly as he told them that their true home was in Israel, which was waiting with open arms to embrace them.

But in a photograph of the capacity crowd in the synagogue sanctuary tweeted by foreign ministry spokesperson Ofir Gindelman, one can see only French flags, with not a single Israeli flag visible. This is a remarkable contrast with U.S. synagogues, where the pulpit is usually decorated with American and Israeli flags. But the piece de resistance came immediately after Netanyahu had finished delivering his speech, and had already turned his back on the crowd to leave. Before he could step down from the bimah, one of the Jewish leaders grabbed a microphone and launched into a spontaneous rendition of the French national anthem. Not Hatikvah, but the Marseillaise. Within seconds the entire audience had joined in, singing loudly and emotionally.

Netanyahu was forced to stand there, facing the yarmulke-wearing French Jews after just having finished telling them that their true home was Israel. Were his lips pressed together because he did not know the words? He did not look pleased at all.

How Bibi Tried To Make Paris All About Him