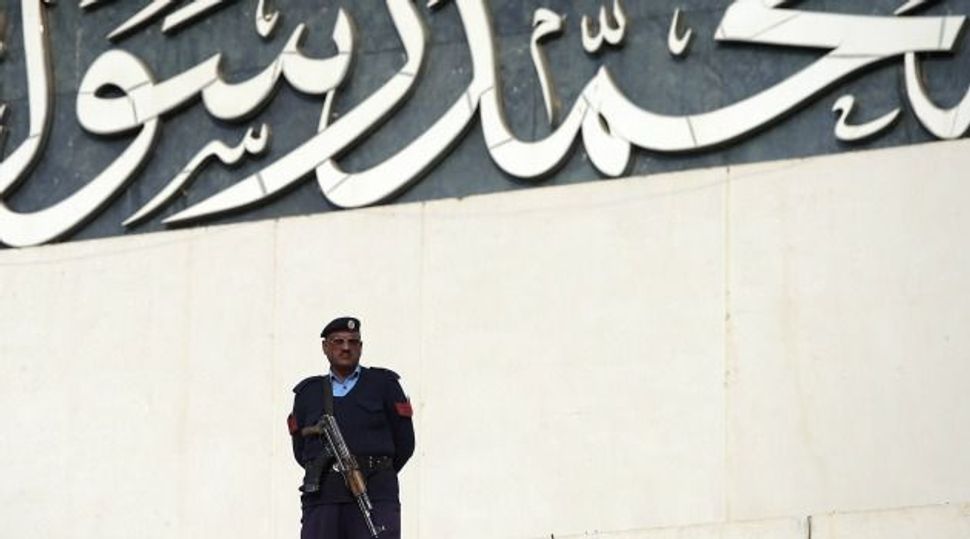 Worlds Apart: A Pakistani policeman stands guard at the Parliament as it passed a symbolic resolution condemning Charlie Hebdo’s caricatures of the Prophet Muhammed as ‘blasphemous.’ Image by getty images

After any great tragedy, especially if it involves a sensational crime, people invariably set to work. Societies erect symbolic monuments of affinity and empathy. Narratives are constructed to make sense of the cataclysm. A sense of order is restored through theatrical displays of civic unity and common purpose. And the collective hunt is on for that most elusive of big game: moral clarity in a world that typically offers a hazy and sometimes obscure reality of uncertainty and ambiguity.

Such determination was readily evident in France in the wake of the appalling massacre at the offices of the satirical magazine Charlie Hebdo. It even took on an international dimension, with world leaders converging on Paris to take part in an inspiringly vast anti-terrorism rally. At the head of the march, indeed, four other dignitaries, including French President François Hollande and German Chancellor Angela Merkel, carefully separated Israeli Prime Minister Benjamin Netanyahu from Palestinian President Mahmoud Abbas. The resulting news photograph spoke volumes about the apparent eagerness of the human family to unite, despite all other differences, in condemnation of this brutal assault on free speech.

Everyone, it seems, can agree that it is absolutely and categorically morally unacceptable for armed hoodlums to massacre cartoonists in order to “punish” or deter such expression. This was the simple and unassailable assertion of moral clarity that was supposedly being offered as a corrective to the heinous massacre by the collective voice of the international community and humanity in general, lunatic fringes notwithstanding. But was it really?

In some significant Muslim-majority states that same week, discordant notes were being struck that disrupt this quest for harmony and consensus. The Saudi Arabian blogger Raif Badawi, who was arrested in 2012 for co-founding the website “Liberal Saudi Network,” received the first 50 of the 1,000 lashes he was sentenced to, in addition to 15 years in prison and more than $250,000 in fines. One of the key charges against Badawi was “insulting Islam” — in other words, blasphemy.

There isn’t any moral equivalency at work here. Badawi was not killed. Indeed, a bootleg video circulating online that apparently depicts his public flogging outside a mosque in Jeddah after Friday prayers suggests that it was a humiliating, unpleasant and painful experience, but not the brutal and bloody affair one might have feared.

Instead, what is troubling is a logical continuum. Badawi was judged guilty of blasphemy and of “insulting Islam.” For that he was punished by the state. A part of his punishment was corporal, in which the supposed sins and crimes of his mind were expiated by the mortification of his flesh. There is a world of difference between Badawi’s fate and that of the Charlie Hebdo victims. But there is also a chain of reason in which the basic ideas behind the Saudi judicial flogging can be twisted to rationalize the Charlie Hebdo attack.

A dreadful incident — that same week, as it happens — illustrates how this pseudo-logical sequence can unfold. Pakistan is one of the countries most bedeviled by the abuse of blasphemy charges against defenseless people (usually religious minorities of one sort or another), deployed by cynical political forces to serve their own narrow and parochial interests. In 2011, Aabid Mehmood was accused of claiming to be a prophet and was indicted on charges of blasphemy. On January 6, he was abducted from his home and his bullet-ridden corpse was discovered the next day in a deserted area. In a similar incident on January 8, a policeman shot and wounded Muhammad Asghar, who is on death row in Pakistan for blasphemy. The same accusation — that he claimed to be a prophet — was leveled against Asghar, who has reportedly been diagnosed with paranoid schizophrenia.

When states make blasphemy a crime punishable by not just imprisonment but also flogging and even, theoretically, execution, the moral case against murdering accused blasphemers is reduced merely to arguments against vigilantism.

Moral clarity on free speech and punishment fades into an even greater haze when the attitudes of many Western states are brought into the mix. Some European countries still have anti-blasphemy laws on the books, and many, including France, have criminalized Holocaust denial. When the pro-Nazi historian David Irving was sentenced to three years in prison in Austria for Holocaust denial, there was very little outcry in the rest of Europe or the West. France has just exacerbated reasonable claims by Muslims and other minorities of a double-standard by arresting 54 people, significantly including the noted comedian Dieudonné, for “supporting terrorism” through their own comments. So it’s true that some obnoxious speech and satire is protected, while others — especially anti-Semitic outbursts — are frequently prosecuted in France.

People yearn for moral clarity because our response to atrocities must be principled and consistent. But even in much of the West, in fact, there is no moral clarity — only a thick fog of partiality and selective outrage — regarding free speech and punishment. For there, too, the idea that certain forms of expression cross the line not only of decency and respectability but also of permissibility and criminal legality is already hard-wired into the law and the conduct of the state.

Of course none of that even begins to justify the massacre at the offices of Charlie Hebdo. And the proper response to that atrocity for states and their leaders can’t be limited to histrionic expressions of outrage. Many Muslim-majority states and Western societies need to take a good look at their own laws and conduct. They must communicate at least enough moral clarity on freedom of speech to deny any basis for rationalizing or justifying violence or any other form of coercion in the name of punishing blasphemy.

Hussein Ibish is a senior fellow at the American Task Force on Palestine. He blogs at Ibishblog.com.