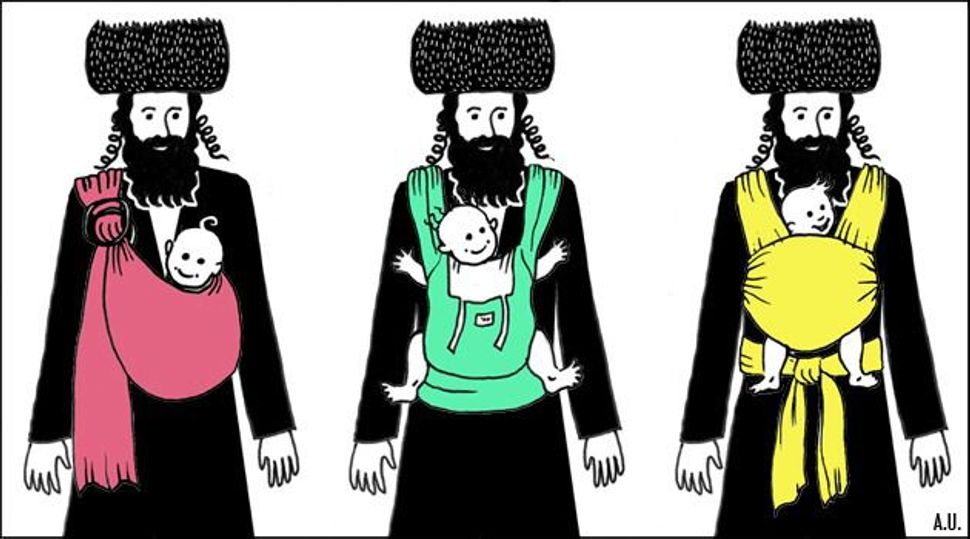 Now that Hasidic men are barred from pushing strollers, will they turn to other modes of baby transportation? / Illustration by Anya Ulinich

That’s a partial list of “goyish” things Satmar Jews have successfully banned within their flock.

Pretty impressive, right? And yet, challenges remain. The Satmars have so far been unsuccessful at banning such blatantly goyish things as: Lexus cars, Bugaboo strollers, hipster neighbors, Jacadi stores, sex, pants, ghoulash, Brooklyn and Sol a Kokosh Mar. And they’ve only had partial success with bike lanes and Lipa Schmeltzer.

But there’s one particularly vile scourge the Satmars have yet to unscourge, and that is — men pushing baby strollers.

Unable to withstand such goyishness a second longer, they published the following notice in a recent issue of the Satmar advertising circular, D’var Yom B’Yomo:

With regard to the new custom among some men to push the baby carriage when walking on the street: The great Rabbi Nosson Yosef Meisels said in 1968, during a speech to grooms in the name of our holy rebbe [R. Joel Teitelbaum, the rebbe of Satmar], that one must not perform this practice, as it originates among the goyim.

Holy flying sasquatch! It’s like I always say, scratch the surface of any old thing and you’re likely to find raging goyishness, so pernicious it almost goes unnoticed. It’s enough to make a Satmar Hasid throw up his hands in despair.

After all, pushing baby strollers is one of the few small family pleasures afforded to Hasidic men.

These men aren’t noted for their childcare skills. Sure, some are experts at feeding bowls of mushed peas and carrots or a couple spoonfuls of applesauce to their infants. Some will delight in pushing their babies on the little swing suspended in the kitchen doorway. If not too tired after a day’s work (or a day of non-work at the kollel), a man might bounce his little tzaddik or tzadeykes on his leg for a couple minutes. But the heavy lifting? The diapering, and the 2 AM feedings, and the shopping for baby outfits and the doctor’s appointments? That’s exclusively a mother’s job, Hasidim will tell you.

And yet, Hasidic fathers do maintain certain prerogatives, and one of them is, when out on a family stroll, for the man to push the baby carriage. Especially if the couple is young and the child is a firstborn. It’s how it’s always been.

It’s sweet actually, especially when observing young Hasidic men’s one-handed navigational dexterity. See, pushing a baby carriage is really just practice for car-driving, and as every Hasidic man knows, two-handed driving is for chumps. A Hasid typically drives with body slumped slightly to the left, one hand on the wheel, the other on his smartphone, waiting for a text. So too with baby carriages — one hand only. All the while, the wife looks on in silent amusement, as wives do when their husbands are being badass.

Alas, now this badassery has been banned.

But will the Satmars fall into line?

On the one hand, the source for this prohibition — the great Rabbi Nosson Yosef Meisels — was not a nobody. A legendary figure within the post-WWII Satmar community, he was one of the great formulators and expositors of Satmar’s anti-Zionist ideology. Rabbi Meisels knew goyish as if he had a PhD in goyishness — if PhDs weren’t themselves too goyish. His expertise on Zionism was second to none, and there’s nothing more goyish than Zionism, of course.

On the other hand, Rabbi Meisels first noticed baby-carriage-pushing in 1968 — and 47 years later, the practice has yet to be rooted out. So it seems the Satmars may just keep on rebelling. What’s next, men arranging babysitters and playdates? Oh, the goyishness!

Shulem Deen is the founding editor of Unpious. His memoir, “All Who Go Do Not Return,” will be out in March from Graywolf Press. Follow him @shdeen.