After Abdullah: What’s Next for Saudi Arabia? 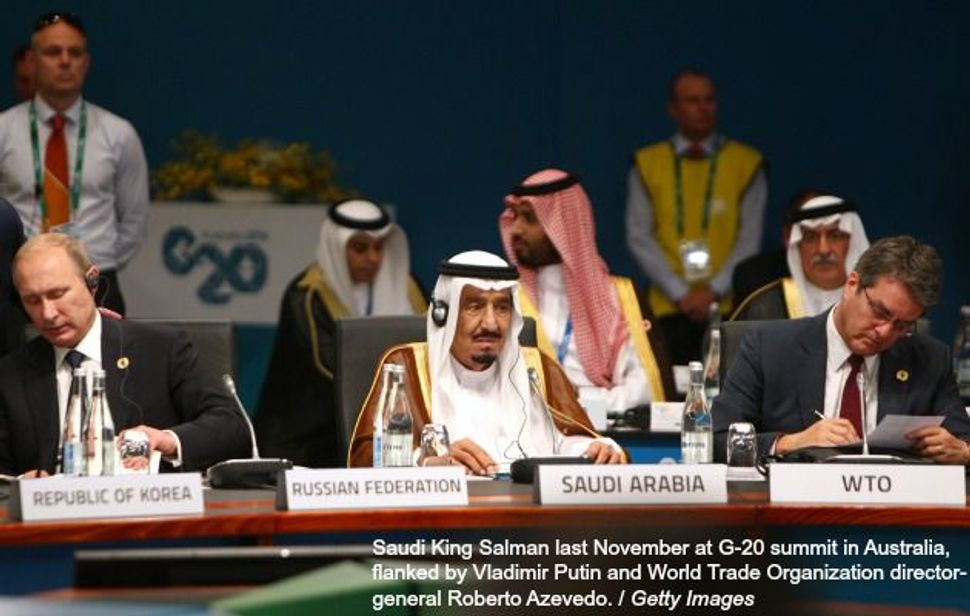 King Abdullah of Saudi Arabia, who died January 23 at age 90, leaves behind a legacy of monumental proportions for his kingdom, the region and the global economy. For that reason, his death leaves a cloud of uncertainty over all three realms. He leaves the country in the hands of an elderly successor, his half-brother Salman, who’s said to suffer health limitations.

Salman is expected to continue Abdullah’s gradualist reformism, though some who know him say he lacks the folksy charm that allowed Abdullah to move faster than anyone had expected.

Abdullah was the sixth monarch of the kingdom created in 1932 by his father, Abdul Aziz ibn Saud. In a way, though, Abdullah can be seen as the first ruler of a new Saudi Arabia that began to emerge under his leadership. King since 2005 and effective ruler for a decade before that, he oversaw the desert kingdom’s transformation from an oversized feudal oil sheikhdom into a leading force in global politics and diplomacy.

In the process he became one of the world’s most influential heads of state. The country that was once a leading voice of Islamist extremism and opposition to Israel became the effective leader of the Arab moderate camp and an advocate of Arab-Israeli peace.

Despite its enormous wealth as the world’s largest oil producer, and its symbolic importance as the birthplace of Islam, Saudi Arabia before Abdullah was famously reclusive and conservative in its international dealings. The monarchy was allied with the United States, but members of the sprawling royal family conducted their own virtual foreign policies, from sponsoring radical Islamist movements to funding international terrorism.

Abdul Aziz ibn Saud, Abdullah’s father, was born in 1876 to a clan that had ruled the oasis town of Riyadh in the Nejd desert of central Arabia on and off for a century. Driven out of Riyadh by a rival clan in 1890, ibn Saud retook the town with 40 followers in 1902 and went on to conquer the rest of the Arabian peninsula over the next three decades and established the deeply conservative theocracy.

The discovery of oil in the 1930s made the kingdom and the royal family fabulously wealthy. Ibn Saud died in 1953 and was succeeded by a series of his sons, who ruled erratically. Saud, the first, was best known as a spendthrift playboy. Forced to abdicate in 1965, he was succeeded by the harsh and austere Feisal, who was assassinated in 1975. He was succeeded by two popular but ineffectual rulers, Khalid and then Fahd. When Fahd suffered a debilitating stroke in 1995, Abdullah took over as regent. He became king after Fahd’s death in 2005.

Few would claim that Abdullah was a crusading liberal. Saudi Arabia is still one of the world’s strictest absolute monarchies. It still spends millions each year promoting its ultra-conservative Wahhabi school of Islam around the world. Representative democracy is practically nonexistent. Women still can’t drive. Dissenters are publicly flogged. Public beheadings are relatively commonplace, occurring almost weekly. The country is among the world’s five leading practitioners of capital punishment, along with China, Iran, Iraq and (ahem) the United States of America.

In his own cautious way, though, the late king took significant strides. He gave women the right to vote, many now attend college, considerable numbers have entered the workforce and starting this year they can run for local office.

In November 1995, the same month that Abdullah became the kingdom’s acting ruler, in a little-noticed but historic move, a 10-member delegation from the Anti-Defamation League in New York was invited to Saudi Arabia for an official visit. It was the first of several ADL delegations that have visited, met with government officials including ranking ministers and on several occasions carried messages to Israeli leaders in Jerusalem.

Over the last decade there were clear signs of an easing in permitted public discourse, from public literary readings to online debate. There are still lines that can’t be crossed. And with the explosion of regional turmoil following the so-called Arab Spring, even the limited openings have been narrowed. Still it’s not the same medieval society it was just two decades ago.

The kingdom also began adopting a more aggressive role in international affairs. It’s cast off its reclusiveness to take a rare combat role alongside the United States in fighting ISIS in Syria. It played a crucial role in pressuring Qatar to stop funding Hamas.

Moreover, Abdullah brought his kingdom for the first time into international interfaith dialogue. In 2007 he became the first Saudi monarch to meet the pope. In 2008 he convened an international interfaith conference in Spain with some 200 Muslim, Christian and Jewish scholars attending, including World Jewish Congress secretary-general Michael Schneider and the interfaith affairs director of the American Jewish Committee, Rabbi David Rosen of Jerusalem, as well as small Hindu and Buddhist delegations. That same year he initiated and chaired an interfaith dialogue at the United Nations at which Israel’s president Shimon Peres and foreign minister Tzipi Livni were invited guests. And in 2011 he set up an international NGO, the King Abdullah bin Abdulaziz International Center for Interreligious and Intercultural Dialogue, cosponsored by Austria and Spain and headquartered in Vienna.

Abdullah’s most famous opening, of course, is the Arab Peace Initiative, which offers Israel full recognition and peace. It’s not just that he released it publicly — to an American Jewish journalist, Thomas Friedman — but that he muscled it through to unanimous ratification by the 22-member Arab League and near-unanimous acceptance by 57-member Organization of Islamic Cooperation (56 in favor, Iran abstaining). The initiative has been re-ratified repeatedly and its text liberalized.

Repeated Israeli governments have rejected it as fatally flawed if not fraudulent, but much of the country’s leadership, including most of the defense and intelligence establishment, consider it a historic breakthrough and a good basis for negotiation.

The question is, what will come next.

Among his reforms, Abdullah introduced the kingdom’s first formal succession process in the form of the Allegiance Council, a group of royal siblings and their sons that he set up in 2006. Under the new system, he was promptly succeeded on Friday by his half-brother, crown prince and now King Salman bin Abdul Aziz, a much admired leader and administrator, former defense minister and architect of the modern metropolis of Riyadh.

But Salman is 79 and said to be partly paralyzed by a stroke. There are rumors of cognitive limitations, too. Scholar Simon Henderson of the Washington Institute for Near East Policy claims his “brain is evidently ravaged by dementia” and he’s capable of functioning lucidly only for minutes at a time. On the other hand, just this past November he led the Saudi delegation to the two-day Brisbane summit of the G-20 nations, where he was in public view for hours at a time, making such extreme limitations unlikely.

Unlike all of ibn Saud’s successors until now, though, Muqrin’s mother was not a tribal princess but a Yemeni concubine. For that reason there’s considerable opposition to him inheriting the crown. Given that he’s considered the last of ibn Saud’s 45 sons (by 22 wives) capable of leading, the next in line after him will have to come from the next generation, the founder’s 37 grandsons.

Salman moved quickly on Friday to name a leader of the third generation, interior minister Mohammed bin Nayef, as the new deputy crown prince. He’s known as a fierce opponent of Islamist radicalism, to the point that he was the target of an Al Qaeda assassination attempt in 2009. His designation as heir to the throne suggests that while Abdullah may be gone, the kingdom’s leadership is determined to keep his Western-leaning reforms in place.

After Abdullah: What’s Next for Saudi Arabia?