Why Megachurch Concept of Sin Is So Dangerous 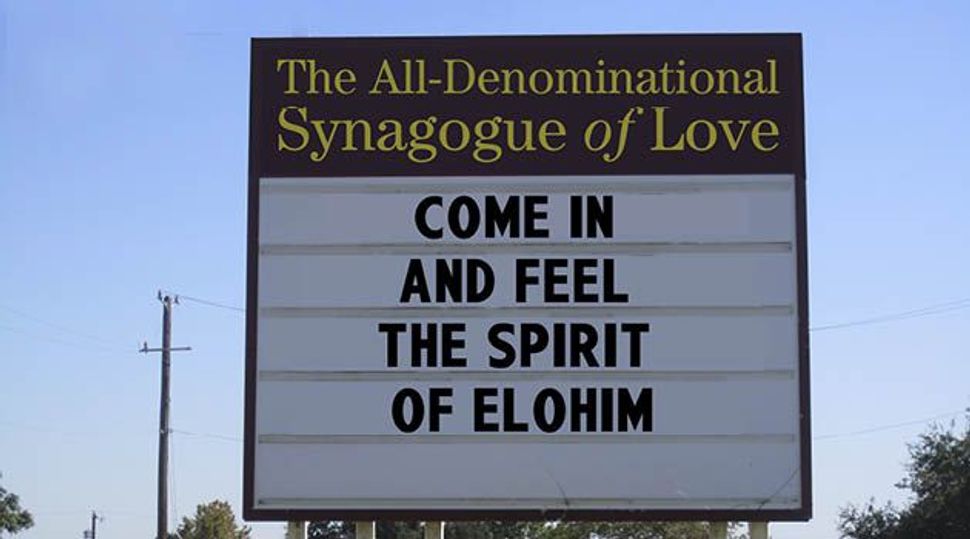 Model To Emulate? There are theological obstacles to a Jewish megachurch. Image by Kurt Hoffman

Last week, I waxed rhapsodic about what the Jewish community could learn from megachurches. As communal institutions, they are far more spiritually-focused, inspiring, diverse, well-managed, and accessible than all but the best synagogues. They meet a demonstrated, expressed need for spiritual meaning and connection, and they deliver the goods in a carefully thought out way. They are centralized hubs of multiple modes of engagement and affiliation, with a low bar to entry and better values around money. They deserve our respect, and imitation.

But it’s interesting to see where the paths diverge, as well. When I visited Tampa’s Idlewild Baptist Church earlier this month (actually located just north of Tampa, in the formerly rural town of Lutz), I was struck by differences too.

The differences were not doctrinal, exactly. Of course, Jesus is central to evangelical Christianity, and is treif in Judaism. But even if you swapped out Jesus for God, the religious consciousness that American white evangelicalism offers is, it seems to me, fascinatingly different from those of Jewish denominations. It’s not that one is better and the other worse — they are just very different.

At my visit to Idlewild, as in past personal encounters with evangelicals and study of Christianity in the academic world and in the media, I was struck by the pervasive consciousness of sin. At times, Idlewild felt like a gigantic twelve-step meeting — no coincidence, since Bill W., the founder of Alcoholics Anonymous, was Christian and set up a Christian program with a Christian logic behind it. Practically every message was about how fallen we human beings are, how incapable we are of our own salvation, or even self-improvement.

Theologically, this has a long lineage. Judaism is a religion of will; you perform the commandments, you act justly, and you are judged according to your actions. Christianity’s great innovation was to declare defeat in that enterprise. There is just no way to square your sinful life with God’s demands; you just can’t do it. So you need a savior — Christ — who will do so on your behalf. Jesus died for our sins, and so we can be saved from the consequences of sin if we accept him as our savior. Salvation is thus a matter of grace, not will.

But I’m more interested in the question psychologically. We all have the experience of falling short, of inadequacy. We don’t live up to our own ideals, let alone those recorded in sacred text. We get angry, act selfishly — we enact the whole litany of sins recited by religious Jews on Yom Kippur, even if we don’t believe in the concept of sin at all.

Judaism, too, has its way of coming to terms with this aspect of the human condition. Even if we can’t live up to the ideals of the Torah — whether traditionally or contemporarily interpreted — there is a daily and yearly opportunity for taking stock (“confessing”) and reflecting on how to do better.

I think, though, that the personal spirituality of evangelical Christianity, which I discussed last week, indelibly colors this particular Christian experience of salvation and makes it quite different from the Jewish one. Jews have the notion of the yetzer tov and the yetzer hara, the good and evil (or selfish, if you like) inclination within each of us. But in this form of Christianity, the yetzer tov is actually not within me, but beyond me. It is Jesus himself.

Suppose I’m considering cheating on my taxes. In a Jewish psychology, I experience various impulses, some selfish and some unselfish. In a Christian psychology, those impulses are “me” and “Jesus.”

Suppose I even experience this debate as small voices within my mind. In mainstream Jewish psychology, those are voices — even if one is the “small, quivering voice” of prophecy, it is still just a voice; a psychological event. In this form of Christianity, that voice is the voice of Jesus speaking to me; it is a theological event.

Thus, the “I” is entirely sinful. Again, let’s set aside original sin, Eve, the Apple, and so on. Psychologically, “I” am the wanting animal. I want sex, food, power, and comfort. I screw up all the time. I can hardly tie my own shoelaces, let alone lead a moral life. If grace is external to me, I am pathetic.

This partial externalization of the mind has political consequences. If human beings are selfish and sinful, there’s little hope for us to right our own affairs. We must turn that over to God’s will — as revealed, of course, in the Bible. That is true in our societal politics and in our personal ones. Compared to what is written in the Bible, what I feel in my heart is unreliable — even evil.

I wonder how many religious Jews feel this way, even if we don’t articulate it as clearly. Observant Jews will protest that they keep kosher because it is a commandment — but, unless one believes in reward and punishment, why keep the commandment? Surely something feels ‘okay’ about being in conformity with such norms, and something ‘not okay’ about disobeying them.

I wonder, too, if this intuitive sense of inadequacy also contributes to the success of Jewish forms that emphasize brokenness, tikkun olam, and other conceptions of the world not being okay as it is.

Perhaps what so irritates us cantankerous agnostics and god-wrestlers about the major-key happiness of Christian rock is the possibility that they have found a solution for it.

I’ve said “a solution” here, because it is obvious to me that there are others. There are many ways to reconcile one’s imperfection with one’s unmet ideals. But as emphasized when I visited Idlewild, the evangelical theology is that Jesus is the way. After all, he says in John 14:6, “I am the way and the truth and the life. No one comes to the Father except through me.”

This theology, too, has troubling political consequences. The pastor of Idlewild cited the verse in the context of arguing that Islam was intrinsically not equal to Christianity. And really, without a creative interpretation of that verse, how could he say otherwise?

Here, of course, Jews have an analogous doctrine: the Chosen People. Yes, there are many spiritualities, but the farther right one goes on the Jewish spectrum, the more one comes across the view that ours is the best — perhaps different in kind as well as degree.

Even apart from their consequences for justice (e.g., the Crusades, the Inquisition), I wonder about the efficacy of such doctrines. How will the evangelicals’ insistence that Christ is the sole way to salvation align with the next generation’s experience of people of other faiths? (Judaism is perhaps the exception here, because of evangelicals’ beliefs about Jews and the end times; I am thinking more of Muslims and Hindus.)

Similarly in the Jewish context. Jewish notions of specialness and chosenness may jar with non-Orthodox Jews’ lived reality. But maybe they keep Jews in the fold. I’m not sure whether we’ll ever know whether it’s a boon or a bane, and if the former, whether if it is worth the costs to justice.

These two Christian sensibilities — the sense of fallenness, coupled with the belief in exclusive salvation — feed one another. As the hymn says, I was blind (fallen) but now can see (saved). And since only Jesus saves, everyone else remains in the fallen state which I know so well from my own experience.

That is dangerous theology, and not in some abstract or academic sense. These are deeply-held beliefs — held so deeply, by Christians or by Jews, that they may not seem to be beliefs at all. They appear as invisible axioms of the human condition: we are bad animals, and there is only one way out.

There is a deep psychological resonance to such notions, but as I drove out of Idlewild’s vast parking lot, guided by a phalanx of smiling volunteers, I felt slightly terrified.

Why Megachurch Concept of Sin Is So Dangerous