7 Axioms of the Copenhagen Terror Attacks 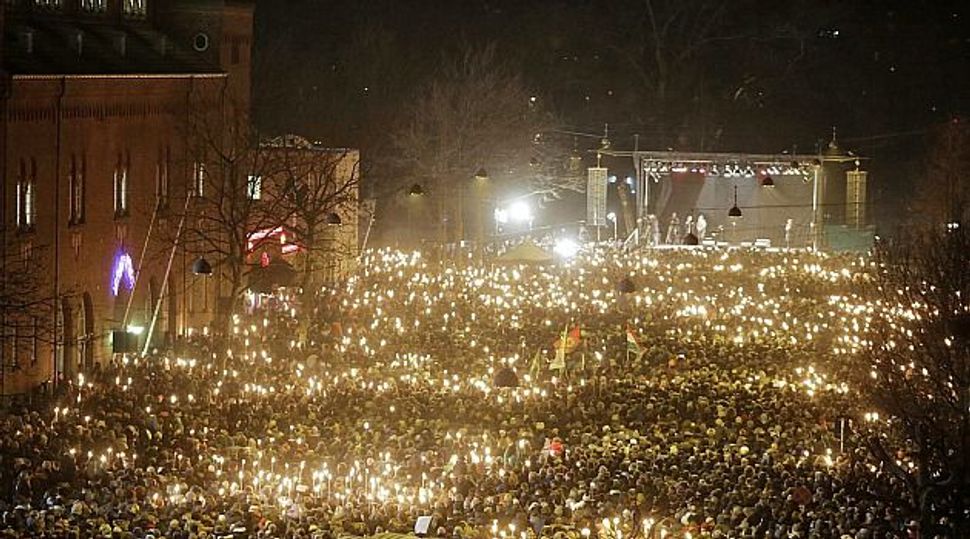 Torches of Hope: Tens of thousands of Danes gather to protest the Copenhagen terror shootings, and mourn the dead. Image by getty images

The news of the attacks on the Copenhagen cafe and synagogue did not surprise us. We may keep hoping this will stop, but the rational parts of our brains know that it will not, at least not for the long term. There have been enough of these attacks that we can now see there are certain things which are axiomatic about them.

Axiom #1: They are part of a pattern. By that I do not mean to suggest that they are all organized by ISIS or ISIS-like groups. They may not be physically connected with one another, but they are ideologically connected. The individuals behind them have been radicalized by a stream of Islam that abhors Western democracy and all it stands for. Some have suggested that the Danish shooter was not “radicalized.” If so, that makes it even scarier. He was not part of a radical group, but he clearly absorbed the message of radical Islamists. How else might you explain his targeting of free speech advocates, police officers and Jews?

Axiom #2: Unless you name something you cannot solve it. We are fighting Muslim extremism, not violent extremism. This violence is directly connected to Islam, though not to all Muslims. To avoid identifying the connection to Islam is not only silly — if one can use that word in conjunction with such a serious threat — but it also pulls the ground out from under moderate Muslims who want to fight this dangerous trend.

Axiom #3: This is not traditional European anti-Semitism. The people who have committed these crimes are convinced that killing Jews is not just acceptable, but a desirable thing to do. In contrast to much of the European anti-Semitism we have seen in centuries past, which attacked Jews for being different from the majority, this form hates both Jews and the majority society and all it stands for, including freedom of religion.

Axiom #4: “Yes, but” comments make room for violence. Muslim extremists pull the triggers, but they have accomplices. They have been given intellectual shelter by those who try to explain these incidents with “yes, but” explanations. In the case of the anti-Semitic actions, they say, “Yes, this is awful, but if Israel only…” (you can fill in the blank) “…this would not happen.” To engage in this kind of reasoning is to rationalize this violence, to make it logical and to render it legitimate. The people who do this — including many well-educated academics — must be called out for what they are doing: justifying murder.

Next time someone makes this link, ask him or her: “Oh, so that makes it acceptable to shoot Jews thousands of miles away from Israel?” They will probably respond: “Of course not. We are just looking for the roots of the violence.” Do they really imagine that if Israel were to pull out of the West Bank these killers would stop shooting Jews?

Axiom #5: There are many liberal voices that did the same thing with the cartoonists (and before them with Salman Rushdie): “If only they had not insulted the Prophet, this would not have happened.” Not only does such reasoning justify the murders, but it is also objectively wrong. Jyllands-Posten, the Danish paper that published the original Muhammad cartoons in 2006, did not republish the Charlie Hebdo ones. That did not stop the attack on the Copenhagen cafe.

Axiom #6: “Violence works.” That is what Jyllands-Posten wrote in an editorial in January explaining its decision not to republish the Charlie Hebdo cartoons. The editors were frightened. Jews are also frightened. They do not wear kippot in many European cities. They do not carry anything that identifies them as Jews. In Denmark, a Jewish radio station shut down and a Jewish school closed just in the last few days. In short, the Muslim extremists are winning.

Axiom #7: This is not just a war on Jews. It is a war on Western democratic liberal values. This is a war being waged by people who reject the notion of freedom of speech, press, religion and expression. In the aftermath of some of these killings I have heard people say that these killers are foreign to European society and they “don’t understand” these concepts. I would argue otherwise. They understand them and reject them.

We are waging a war against extremists who are inherently opposed to everything we value about the society in which we live. They want us to live in fear. Doing so grants them a victory and, as the Danes at the cafe learned, doesn’t protect us from future violence.

In sum, we must name the threat, help those Muslims who reject these behaviors, challenge those who would engage in rationalizations and, somehow, refuse to succumb to fear.

Deborah Lipstadt, a Forward contributing editor, is the Dorot Professor of Modern Jewish and Holocaust Studies at Emory University.

7 Axioms of the Copenhagen Terror Attacks