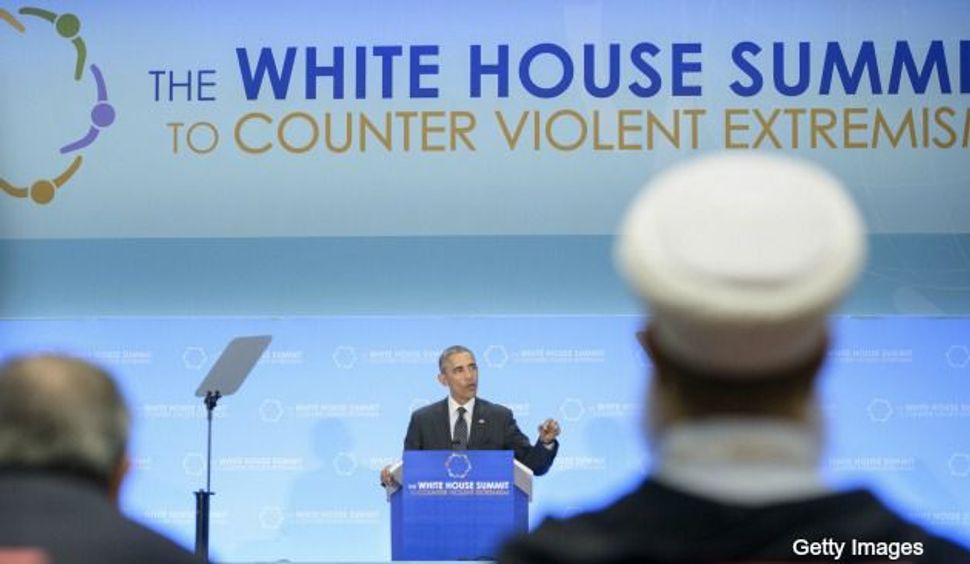 President Obama may have a fine plan in the works for combating what he calls “violent extremism,” but he doesn’t do the cause any good by tiptoeing around the problem. There are many sources of violent extremism in the world, but there’s basically just one that’s terrorizing vast sections of humanity right now, and that’s the one that identifies itself with purist Islam and jihad.

The president laid out his theory, if that’s what it is, in two forums this week. Once in a February 17 op-ed essay in the Los Angeles Times, here, and once in his February 19 speech to his summit in Washington, (text here, video here). A serious reading of the two documents makes it clear why he prefers the vague nomenclature he’s chosen, and equally clear why it makes no sense.

In the first place, his effort to show that the sort of terrorism under discussion finds roots in a variety of ideologies and religious communities has the effect of muddying the issue. In the L.A. Times he mentions the shootings in 2012 at a Wisconsin Sikh temple and in 2014 at the Kansas City Jewish community center, both by white supremacists, as examples of the sort of problem we’re up against. But they’re not. Violent white supremacists are a relatively small group with no major funding, capable of only occasional attacks. The Christian Crusades, which he cited in his talk at the National Prayer Breakfast February 5, were a millennium ago and aren’t likely to recur. Revolutionary jihadism is happening now, and it’s threatening entire countries in the Middle East, tearing apart societies as far apart as Nigeria and Afghanistan, and challenging daily life in Europe, at least for artists and Jews.

There is a global crisis right now, and it’s severe, widespread and specific to a particular faith community in a way that no other form of violent extremism is at this moment in history. Israeli intelligence calls it global jihad, which gets closer to the reality than the president’s weasel-words. Sincere, moderate Muslims may argue that the Israeli nomenclature demeans the religious concept of jihad, which is broader and deeper than the holy war that the word commonly conjures up. There’s Islamism , but that sounds too much like Islam to usefully mark the distinction. How about jihadism? Revolutionary jihadism?

Second, by denying the serious religious roots of jihadist terrorism and dismissing it as some mindless, nihilistic or power-hungry thuggery, he obscures some of the genuine issues at play in this crisis. It may be true, as he claims, that some of the young people who are recruited to jihadist organizations are marginalized or poor, but many are not. It’s been noted repeatedly that the terrorists who attacked America in September 2001 were educated and middle-class. Some of the perpetrators in subsequent attacks came from poor or marginalized backgrounds, but others didn’t. What they had in common, and what they share with the thousands streaming to Syria to join ISIS, is a sense of excitement, passion and meaning that they found in the messages of jihad advanced on line and in mosques around the world by radical preachers.

Obama is undoubtedly correct that the vast majority of the world’s Muslims reject the actions of ISIS, Al Qaeda, Boko Haram and the rest and are horrified at the wanton murders committed in the name of jihad in Paris, Copenhagen, Brussels, Toulouse, Boston and elsewhere. But the attacks aren’t random. They repeatedly target cartoonists and artists who satirize the prophet Muhammad, including Charlie Hebdo, Salman Rushdie and the cartoonist who was discussing free speech at the Krudttoenden cultural center in Copenhagen last week. They repeatedly target Jews and Jewish institutions, which they seem to view as available surrogates for the Jewish state whose birth posed a genuine religious challenge to Muslim doctrine.

It’s worth recalling that nearly every Muslim spokesman who appeared in the major media following the Charlie Hebdo attack condemned the murders, but promptly linked them to the widespread sense of insult among Muslims over the magazine’s mocking of Islam. The violence throughout the Muslim world in 2005 in response to the Muhammad cartoons published by the Danish newspaper Jyllands-Posten wasn’t limited to a few poor or marginal youths, nor was it incited by a handful of corrupt preachers. It drew hundreds of thousands of Muslims into the streets to defend their prophet and their faith. Nor was that a tiny offshoot of Islam that responded in that way.

The Organization of Islamic Cooperation, the 57-nation intergovernmental association that was represented at the White House extremism summit this week, has been trying since 1998 to have the United Nations outlaw what they call “defamation of religion.” They’re not referring to what Americans and Westerners mean by hate speech, namely racist or anti-Semitic talk that might incite a third party to attack black or Jewish persons, but rather to expressions of opinion about a set of ideas — the very essence of legitimate debate in Western thought — that might incite Muslims to attack the speaker.

Poverty and marginalization surely play a role in preparing the ground for this global crisis, but they’re not the whole problem, nor even the main problem. Nor is it lack of human rights in Muslim societies. Some of what the West considers fundamental human rights, like freedom of speech and freedom of conscience, are high on the list of irritants that jihadists are battling against.

The Muslim community worldwide is experiencing a convulsive, traumatic period in its history right now. In part it’s a complex, painful adjustment to modernity. It’s similar in historic terms to what Christianity experienced in the blood-soaked sixteenth and seventeenth centuries. It’s reflected, dissected and analyzed at great length in the massive and hugely important (and underappreciated) Arab Human Development Reports produced by the United Nations over the past decade. Those struggles deserve the sympathy of fair-minded people everywhere.

In part, too, it’s a response to modern communications technology, which brings the raw, free-wheeling discourse of the post-modern West relentlessly into a Muslim world that tries to live by different standards and finds its religious sensibilities continually under assault. For this there’s a tad less sympathy. We in the West may regret the discomfort our discourse might cause to others outside our orbit, but it’s not immediately obvious that we should sacrifice our values — free thought and expression — in deference to others’ sensibilities.

As tempting as it might be, it’s not for the president of the United States to declare which versions of Islam or any other religion are the legitimate ones. Some countries allow their governments to dictate which religious doctrines are right or wrong. America doesn’t.

There’s an article currently in The Atlantic by the Canadian journalist and Yale political scientist Graeme Wood, “What ISIS Really Wants,” that’s a must-read for anyone seriously interested in understanding the Islamic religious roots of ISIS. As much as we may dislike it, these guys and their acolytes are acting on a set of religious beliefs. It behooves us to understand what we’re up against.