Benjamin Netanyahu’s Iran Exaggerations Now Clear for All To See 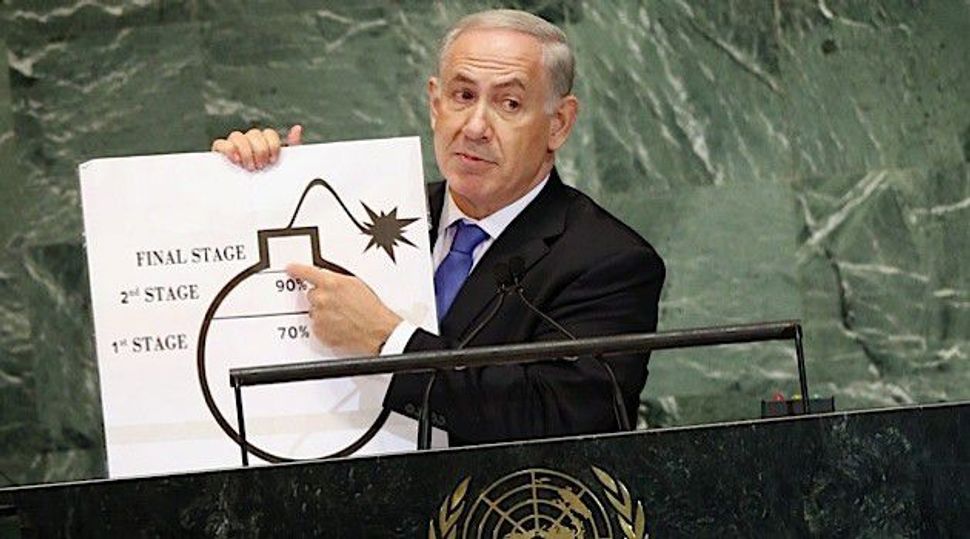 Wil E. Coyote: Bibi’s presentation of the ticking bomb at the United Nations in 2013 Image by Getty Image

Say what you will, the latest intelligence leak to hit the world headlines couldn’t have come at a worse time for Benjamin Netanyahu. Just a week before the Israeli prime minister’s congressional address on the Iranian nuclear threat, a document from his own spy agency turns up and shows that his dark warnings about Iran don’t always match the facts known to Israeli intelligence.

What put the Mossad memo in the headlines is the fact that it’s dated October 22, 2012, barely three-and-a-half weeks after Netanyahu’s famous cartoon-bomb speech about Iran to the United Nations General Assembly. Yet it contradicted the Israeli leader’s U.N. speech on several critical points of fact, including how far away Iran was from bomb-making capacity and whether it even had the ability to produce weapons-grade uranium.

This isn’t the first time Netanyahu’s Iran talk has been contradicted by voices from within Israel’s security establishment. Up to now, though, dissent has come from individuals speaking to closed audiences or in carefully couched newspaper interviews. This is the first time disagreements have surfaced in an apparently official Mossad document.

No less important, previous disagreements have usually involved analysis or interpretation of the facts: whether an Israeli attack on Iran was wise; whether the Iranian threat to Israel is “existential”; whether Tehran’s leaders could be reasoned with.

The heart of Netanyahu’s U.N. speech concerned Iran’s progress in enriching uranium to weapons-grade purity, which he said was only months away from completion. Of the three stages of enrichment — refining raw ore to 5% pure uranium, then refining it again to 20% and finally to bomb-grade 90% purity — Iran had “completed the first stage” and was “well into the second stage,” which would be finished “by next spring, at most by next summer,” meaning 2013.

“From there,” he said, “it’s only a few months, possibly a few weeks before they get enough enriched uranium for the first bomb.”

And once Iran had a bomb, he said, it would use it, because its “apocalyptic leaders” believe a nuclear holocaust would bring the rapture, when “their brand of radical Islam will rule the earth.”

The Mossad memo, dated less than a month later, said that “even though Iran has accumulated enough 5% enriched uranium for several bombs, and has enriched some of it to 20%, it does not appear ready to enrich it to higher levels.” For one thing, the 20% stockpile was “not increasing” because quantities were being “allocated” to the civilian-based Tehran Research Reactor.

Second, enrichment to weapons-grade, the third stage, wouldn’t be possible until work was finished on a separate facility, the IR40 heavy-water reactor under construction at Arak. “We assess,” the memo said, “that this will not happen before mid-2014” — a full year after Netanyahu said the quickie third stage would begin.

Even then, Arak “is expected to produce enough military-grade plutonium for one bomb per year, but in the absence of a nuclear fuel reprocessing plant” — an essential last leg that’s “unknown in Iran” — “this plutonium will not be able to be used for weapons.” The “bottom line”: Iran was “not performing the activity necessary to produce weapons,” but was building the “knowhow” and “organizational framework” to do so “when the order is given.”

The memo’s leaking follows years of public and semi-public indications that Israel’s senior security figures don’t share Netanyahu’s views on Iran. Most famous was the dissent in the spring of 2010 by the heads of the three main security branches, the Mossad, Shin Bet and Israel Defense Forces, when the prime minister ordered preparations for an air attack on Iran. All three were replaced in early 2011.

Their objection — the Mossad’s Meir Dagan called the proposed attack “the stupidest thing I ever heard” — didn’t concern enrichment. As former Netanyahu security adviser Uzi Arad explained to me, a solo Israeli attack would make things worse. It might flatten some facilities and gain a year’s delay. But Iran would quickly rebuild, and could now act openly, claiming it needed nukes to defend itself against a nearby nuclear power that attacked first.

To be useful, Arad said, a raid must be led by America, which has far more firepower, and should include Western and moderate Arab nations. Allied support would be needed to impose long-term, highly intrusive inspections that ensure Tehran doesn’t rearm. An Israeli attack would render all that impossible.

The other, more veiled critique of Netanyahu is the assertion that the Iranian leadership is “rational,” as stated by then-IDF chief of staff Benny Gantz in an April 2012 Haaretz interview, and that Iran doesn’t pose an “existential threat” to Israel, as stated by Mossad director Tamir Pardo in a December 2011 speech and repeated since then by former IDF chief Dan Halutz and former Mossad director Efraim Halevy.

Despite its preparations, Gantz told Haaretz, Iran would stop short of actually manufacturing a nuclear device as long as it faced a credible military threat, because its leaders are “very rational people” who aren’t suicidal. The same logic led Pardo, Halutz and Halevy to conclude that Iran isn’t an “existential” threat — that it wouldn’t drop a nuclear bomb on Israel, knowing that Israel would retaliate in kind. It’s a threat, to be sure; mere possession of a bomb would change the regional balance of power in dangerous ways and restrict Israel’s maneuvering room. But mutual annihilation isn’t in the cards.

The rationality question lies at the heart of Netanyahu’s dispute with the Obama administration. Under President Bush, the Europeans were negotiating with Iran and getting nowhere, while America looked on. The Bush administration imposed strict sanctions, but Russia and China didn’t participate, claiming America hadn’t given negotiations a chance. Iran, unscathed, raced forward.

Obama changed the game by taking the lead in negotiations. That convinced Russia and China to join broader sanctions, which finally began to hurt. The result: Iran’s agreement a year ago to negotiate seriously and sharply slow its nuclear work — including halting construction at Arak — in return for partial easing of sanctions. The goal is an Iranian nuclear infrastructure that’s kept permanently a year short of bomb capacity, enough time for the West to detect and react to a violation.

Netanyahu insists any Iranian enrichment is too much. Nobody believes Iran will voluntarily drop its entire project, but the prime minister believes — sincerely, his aides insist — that if he can convince enough people, a truly crippling sanctions regime can bring the mullahs to their knees. Apparently they’re irrational enough to welcome nuclear Armageddon, but rational enough to yield to economic punishment.

Netanyahu might reasonably have hoped appealing in the name of Israel and the Jewish people, he might sway Washington officialdom. But now, thanks to Al Jazeera, they’ll have to wonder whether his words reflect what Israel’s vaunted intelligence knows, and if not, where else he goes for information.

Benjamin Netanyahu’s Iran Exaggerations Now Clear for All To See