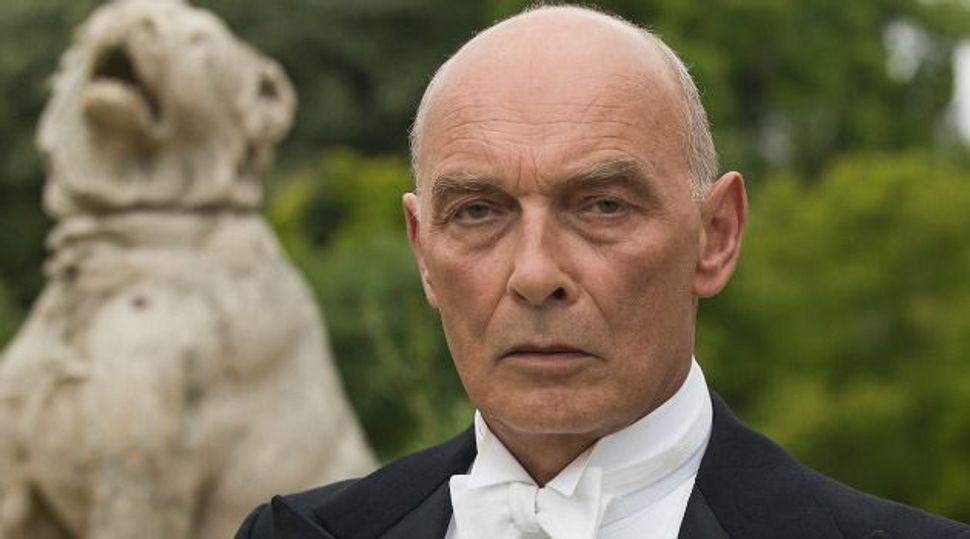 Nice Jewish Lord: Lord Sinderby is the guy lots of ‘Downton Abbey’ fans love to hate. But he makes an important point about intermarriage. Image by Courtesy of pbs

I write in support of Lord Sinderby. Surely you’ve seen his character on “Downton Abbey”: more dour than Carson the butler, more rigid than Lord Grantham, Sinderby is a self-made Jew who is implacably opposed to his son’s marriage to a non-Jew. On the very morning of the wedding in a registry (no church or synagogue would have them), he makes it clear to his love-struck son that he doesn’t want him to marry outside the faith.

The timing of this conversation is terrible. I’ll admit that. It should have happened as soon as the son, Atticus, started fawning over his dear Rose.

But Lord Sinderby has a sincere point that can’t get lost in all the sneering.

“Our family has achieved a great deal since we came to this country. Not just for ourselves, for our people,” he begins. “We have a proud history and we’ve taken our place among the leaders of this land. And now you want to throw all that away for this little shiksa!”

Lord Sinderby’s pretensions to elegance are matched by his inelegant choice of words, I’ll grant that, too. But he goes on to remind his son that, good intentions aside, his grandchildren won’t be Jewish: “The second Lord Sinderby may be Jewish but the third will not. And soon our family will be one more British dynasty with all the same prejudices as everyone else.”

Love conquers all in this ridiculously addicting series, and anyone standing in its way is depicted as heartless. So it is today. But if progressive Judaism is to be sustained, we need to learn how to ask uncomfortable questions, without resorting to a sneering script.