The Real Existential Threat Is Not Iran. It’s Bibi. 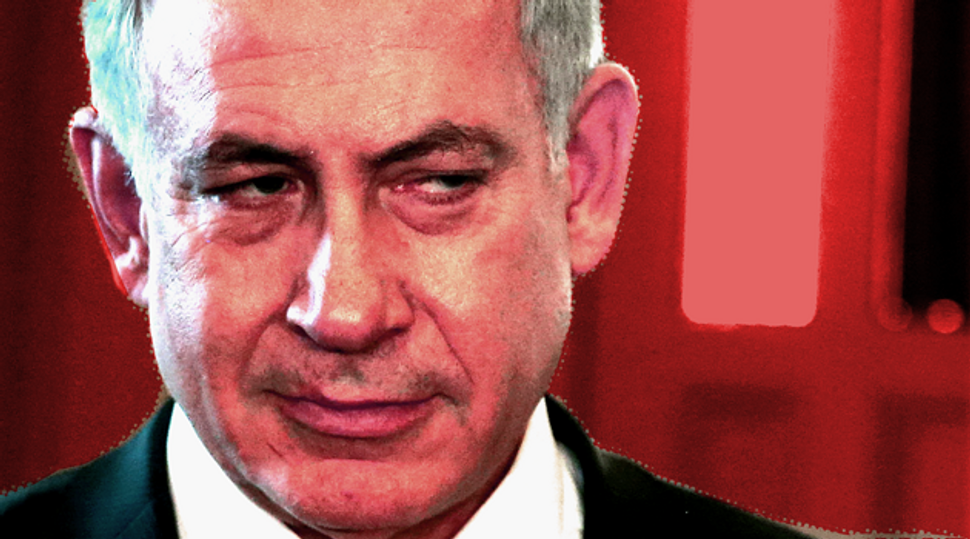 On the eve of his departure to Washington this week, Benjamin Netanyahu told the Israeli press assembled on the airport tarmac that he had a “sacred duty” to do everything in his power to protect Israel and the Jewish people from existential threats. As Netanyahu has said nearly every time he’s made a public address over the last decade or so, he believes that Iran is out to destroy the state of Israel. More recently, the Israeli prime minister has amped up his fear message with his frequent insistence that the only safe place for Jews to live is the state of Israel. In reality, Israel is a far more dangerous place for a Jew to live — just look at the relative casualty counts. And Netanyahu has not only made Israel a more dangerous place for Jews, but he has made them more vulnerable in the Diaspora as well.

In fact, you could argue that Netanyahu’s policies have made Jews — in Israel and around the world — more vulnerable than they have been at any time since 1948.

On Netanyahu’s watch, the Israeli military launched two military campaigns against Gaza in as many years. On both occasions, hundreds of thousands of Israeli civilians came under rocket fire from Gaza. Children spent their summers in bomb shelters, while parents living on the Gaza border tried to keep from panicking every time an air raid siren caught them more than 30 seconds from the nearest safe room. Seventy-one Israelis were killed in last summer’s war, and another six were killed in the 2013 operation called Pillar of Defense. The media and military experts credited the air defense system known as Iron Dome with minimizing Israeli civilian casualties, with the Israeli foreign ministry even presenting a Hanukkah menorah designed like a mini Iron Dome to U.S. ambassador Dan Shapiro.

Iron Dome is, as most people know, funded by the United States, with emergency additional funding approved by Congress during last summer’s war. Democratic Senator Dianne Feinstein was among the leaders of the initiative to expedite emergency help to Israel. But on Sunday she said on CNN’s Face the Nation that Netanyahu was “arrogant” and “did not represent” her as a Jewish American. Will she be as quick to support Israel in the future, now that Netanyahu has so openly insulted President Obama and the Democrats? It’s hard to say, but certainly dividing American support for Israel, which for years was unswerving and bipartisan, makes Israel look vulnerable in the international arena.

When Jews were targeted by radical Islamists who, claiming they were inspired or deployed by the so-called Islamic State, gunned down children at a school in Toulouse and customers at a kosher supermarket in Paris, Netanyahu’s response was to say that Jews didn’t belong in Europe and should all move to Israel — where Jews are even more vulnerable to political violence. As several Jewish community leaders noted, with quite a bit of asperity, they did not appreciate the prime minister of Israel undermining their position as citizens of Europe who belonged there just as much as non-Jews. They weren’t too impressed by his denigrating the value of Jewish culture in the Diaspora, either.

Netanyahu has in recent years styled himself as a sort of Old Testament prophet endowed with Churchillian prescience. Speaking to AIPAC on Monday, the Israeli prime minister reiterated that he was morally obligated to speak up for the Jews. He has claimed to be an emissary for the Jews, but, as Feinstein said on Face the Nation, he does not represent her. And it seems that quite a few American Jews, the vast majority of whom vote Democrat, are pretty uncomfortable at hearing Netanyahu claim he represents their interests.

We all know that Netanyahu thinks any deal with Iran would be bad for the Jews. The leaders of the Israeli Intelligence community disagree with him. The head of Aman, Israeli military Intelligence, said at the Herzliya Conference last year that the multilateral talks with Iran were substantive and serious. Former Mossad director Efraim Halevy has openly criticized Netanyahu for describing Iran as an existential threat. And Meir Dagan, the Mossad director who preceded Tamir Pardo (the current Mossad head), said that Netanyahu was “…the person that has caused Israel the most strategic damage when it comes to the Iranian issue.”

And yet, despite all the evidence to the contrary, Netanyahu still got 16,000 Jewish Americans gathered for his AIPAC speech on Monday to offer a standing ovation when he repeated that all he cared about was the safety and security of the Jewish people.

The Real Existential Threat Is Not Iran. It’s Bibi.