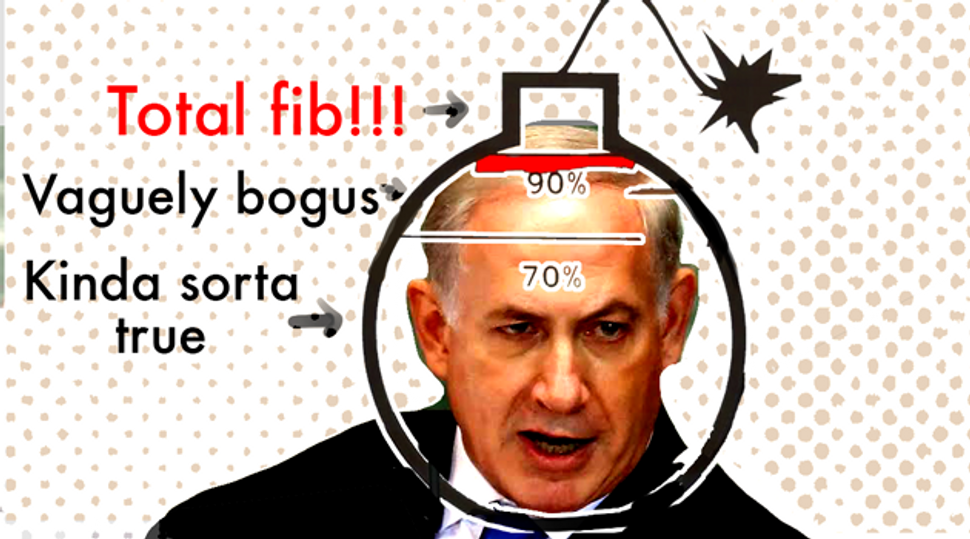 The case Netanyahu laid out against an Iran deal in his address to Congress revolves around 11 core arguments. Think they sound convincing? Look at those arguments one by one, and you’ll see why each of them is bogus.

Argument #1. More pressure can secure a better deal with Iran than current negotiations. If Iran walks away from talks now, this pressure will eventually bring it back to the table, ready to make more compromises.

Pressure in the form of sanctions — especially multilateral, international sanctions — helped convince Iran to come to the negotiating table. But Iran’s red lines in negotiations, including retaining some level of enrichment, are clear. Additional U.S. pressure now, aimed at forcing the Iranian regime “to its knees,” is far more likely to scuttle talks than to force greater Iranian flexibility, and the failure of diplomacy would be blamed on the U.S., not Iran. One result: no deal to curtail Iran’s nuclear program. Another result: strengthening those in Iran who support weaponization of the nuclear program as a deterrent against attack. And a third result: the almost certain collapse of the international sanctions regime, which has been critical to restraining Iran’s nuclear program so far.

Argument #2. The only good deal with Iran is one that completely or nearly completely dismantles Iran’s nuclear infrastructure, preventing Iran from enriching or limiting Iran to close to zero enrichment.

Zero enrichment or complete dismantlement of Iran’s nuclear infrastructure is both unachievable and unnecessary. It’s unachievable because just as U.S. negotiators must get a deal they can “sell” to their constituencies, Iranian negotiators must be able to sell a deal to their own constituencies as meeting their own red lines. And it’s unnecessary because assuming “zero enrichment” and “complete dismantlement” are genuinely shorthand for “the best possible guarantee that Iran’s nuclear program will remain peaceful,” this goal can be achieved through a nuclear agreement that includes strict limits on Iran’s enrichment capacity and stringent safeguards and transparency with respect to Iran’s nuclear facilities and materials. Insisting on “zero enrichment” or “total dismantlement” guarantees no deal — which means it guarantees that such limits and safeguards are absent.

Argument #3. Any deal with Iran is a bad deal, because the mullahs can’t be trusted.

Argument #4. It would be wrong to make any nuclear deal with Iran unless that deal also held Iran accountable for its support for terrorism and extremism, in the region and beyond.

An Iran nuclear deal would not change U.S. policy or impact U.S. sanctions with respect to Iran’s support for terrorism. U.S. anti-terrorism legislation is for the most part separate from Iran nuclear legislation; anti-terrorist provisions that apply to countries around the world would continue to apply equally to Iran, even with a nuclear deal in place. A nuclear deal with Iran could, potentially, open the door for improved U.S.-Iran relations, which could increase U.S. leverage and potentially lead to improvements in other areas of concern to the U.S., including concerns linked to Iran’s support for terrorist organizations.

Argument #5. It would be wrong to make any nuclear deal with Iran unless that deal also held Iran accountable for its terrible record with respect to human rights and civil liberties inside Iran.

An Iran nuclear deal would not change U.S. policy or impact U.S. sanctions with respect to Iran’s record on human rights abuses, democracy, or other non-nuclear-related matters. By improving the conditions of Iranians overall, an Iran nuclear deal could strengthen domestic groups engaged in promoting human rights and civil liberties. It could also strengthen Iranian political forces that are more open to change. For these reasons, a nuclear deal is widely supported by human rights and democracy advocates within Iran. The failure of Iran diplomacy — and what this failure would mean in terms of discrediting some of Iran’s more moderate political voices — could open the door to greater repression domestically.

Argument #6. A deal with Iran over its nuclear program will only strengthen an odious, extremist regime, and in doing so increase the threat of extremists everywhere.

The U.S. and its P5+1 partners are pursuing a nuclear agreement with Iran not as a gift to Iran, but because curtailing the threat of a nuclear-armed Iran is in the vital interests of the U.S. and the international community, including Israel. A deal with Iran over its nuclear program would in no way imply U.S. approval for Iranian policies or bad behavior in any sphere. And a deal would in no way limit the ability of the U.S. and the international community to sanction or pressure Iran for bad behavior — just like any other country.

Argument #7. One-year “breakout” time for Iran to become a nuclear state is way too short. If Iran decides to dash to get a bomb, it will already be too late.

“Breakout” time doesn’t refer to the time required for Iran to become a nuclear-armed state. It refers to the time needed for Iran to produce enough weapons-grade uranium to fuel a single nuclear bomb. To become a nuclear-armed state, Iran would have to produce enough weapons-grade uranium for at least two bombs, one to test (to prove its nuclear capabilities) and the other to hold as a deterrent against retaliation. It would also have to build both bombs, build a working delivery system, and carry out a test. An agreement would impede Iran’s ability to do all of these things. It would extend “breakout” time from the current 2-3 months to at least one year.

Argument #8. It doesn’t matter how many limits or safeguards you put into place — Iran will “sneak out,” and we will wake up one day to find Iran armed with nuclear bombs.

Guess what? “Sneak-out” is a danger with or without an agreement. An agreement will put into place inspection, oversight and verification mechanisms — with respect to facilities, equipment and supplies — that ensure that a “sneak-out” would be far more difficult for Iran to achieve and far more likely to be detected. Without an agreement, this oversight will not be implemented, ensuring that any “sneak-out” effort would be far more likely to go undetected.

Under the interim deal that gave birth to the current negotiations Iran has already eliminated its stockpile of 20% enriched uranium gas, the feedstock required to produce weapons-grade uranium — in effect emptying the cartoon bomb that Netanyahu displayed at the U.N. So the immediate threat of Iranian “breakout” has been dramatically reduced. A nuclear deal can be expected to build on this, significantly reducing and capping the number of centrifuges spinning in Iran, limiting the type of centrifuges, and limiting enrichment, such that Netanyahu’s cartoon bomb will not be refilled and weapons-grade uranium remains out-of-reach. Without an agreement, the number of Iran’s centrifuges can only be expected to grow.

Argument #10. A nuclear deal with Iran will leave Iran as a threat to the world and an existential threat to Israel, will sell out our allies in the Gulf, and will fuel a nuclear arms race in the region.

A negotiated deal with Iran would not imply that the U.S. was abandoning traditional allies in favor of warmer ties with Iran. Neither diplomacy nor military action can guarantee that Iran will not someday decide to pursue nuclear weapons. International pressure and sanctions have impeded Iran’s nuclear program for years, but more importantly, leaders in Iran today have decided not to pursue an active nuclear weapons program. A negotiated deal can bolster this decision, while further rolling back Iran’s nuclear capacity such that if Iran’s leaders someday have a change of heart, the U.S. and international community — including our allies in the region — will have ample time to take action.

Argument #11. A deal that “sunsets” after 10 or 15 years is no good — it just means that Iran will wait and ready itself and then go nuclear the minute a deal ends.

An Iran nuclear agreement would dramatically mitigate the short- and medium-term threats of Iran acquiring nuclear weapons. When that agreement ends, Iran would remain a member of the Non-Proliferation of Nuclear Weapons, subject to the terms of that treaty (and it was violations of the NPT that got Iran in trouble in the first place). Iran would also remain bound by an Additional Protocol to the treaty, granting U.N. inspectors greater authority in monitoring Iran’s nuclear program. At that time, following a decade or more of intrusive inspections and other oversight mechanisms, the U.S. and international community would be in a far stronger position to judge Iran’s actions and intentions vis-à-vis its nuclear program than they would have been without a deal. If Iran then appears to be shifting course and pursuing weaponization, the U.S. and international community would take action — and their decisions at that time would benefit from more than a decade of insights into Iran’s nuclear program.

Lara Friedman is the Director of Policy and Government Relations for Americans for Peace Now.