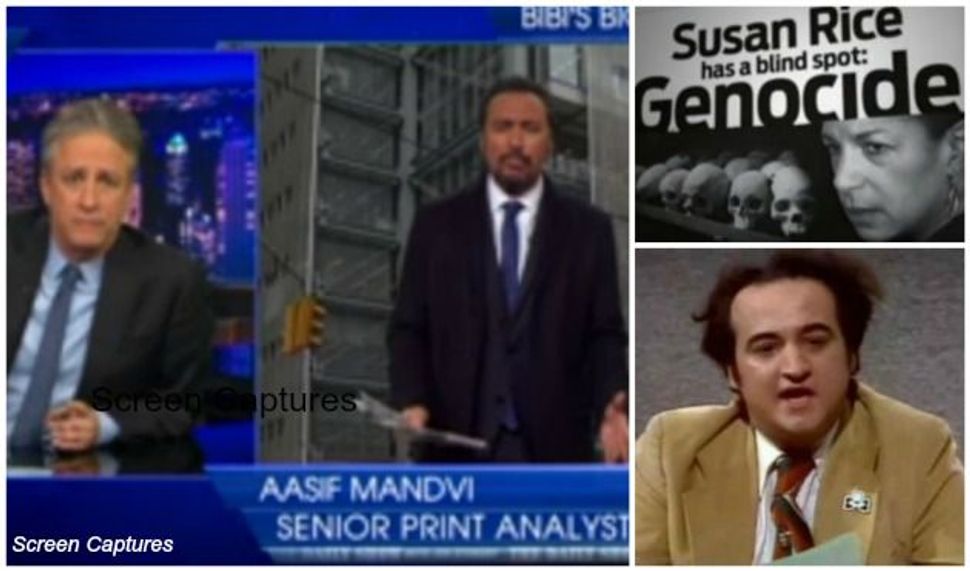 You might have missed these two essential video clips commenting on the week’s news. Fear not — here they are. One features Jon Stewart and Aasif Mandvi on the debate surrounding Benjamin Netanyahu’s visit and its impact on the print newspaper industry. The other, erudite meteorological comment on the horrid weather socking us as March comes in like a lion, from the late, great John Belushi.

First, the Daily Show on Bibi ads. It’s a follow-up to Stewart’s Wednesday commentary on the Israeli prime minister’s State of the Jewish Nation address to Congress. The Forward posted the main bit (here), in which Stewart comments on the reception Congress gave the Bibster. (If you can’t find it, here’s a link to the full-length version of Stewart’s commentary on the speech, courtesy of Comedy Central.)

The part you missed, though, came after the commercial break. Stewart went to senior print analyst Aasif Mandvi, who explained how the prime minister’s visit may have saved the print newspaper industry: by getting Jews to buy competing full-page ads to have their say on Netanyahu, Obama, U.S.-Israel relations and genocide.

Mandvi: Think about it, Jon. What would you have said a week ago if I had asked you what it would take to save the publishing industry?

Stewart: Oh, I would have said it would take a — a comet knocking out the Internet, or newspapers printed on chocolate. You know, that sort of thing?

Mandvi: Good ideas, but not as good as angry Jews!

Stewart: Really one of the better iPhone games I’ve played…

Second is a meteorological update on the nasty weather that doesn’t seem to go away. To explain the complexities, I offer the comment on Saturday Night Live by Weekend Update chief meteorologist John Belushi of blessed memory, reminding us that March doesn’t always come in like a lion and go out like a lamb. For example, he reports, in the Maldive islands, “March comes in like a wildebeest and goes out like ant — a tiny little ant…” But I don’t do it justice. This you’ve got to see:

(If the video doesn’t show up, catch it on Yahoo here or at NBC here.

If those llnks still don’t work, try this YouTube version — audio only (the visual is a still from another Belushi bit) but still very, very funny.