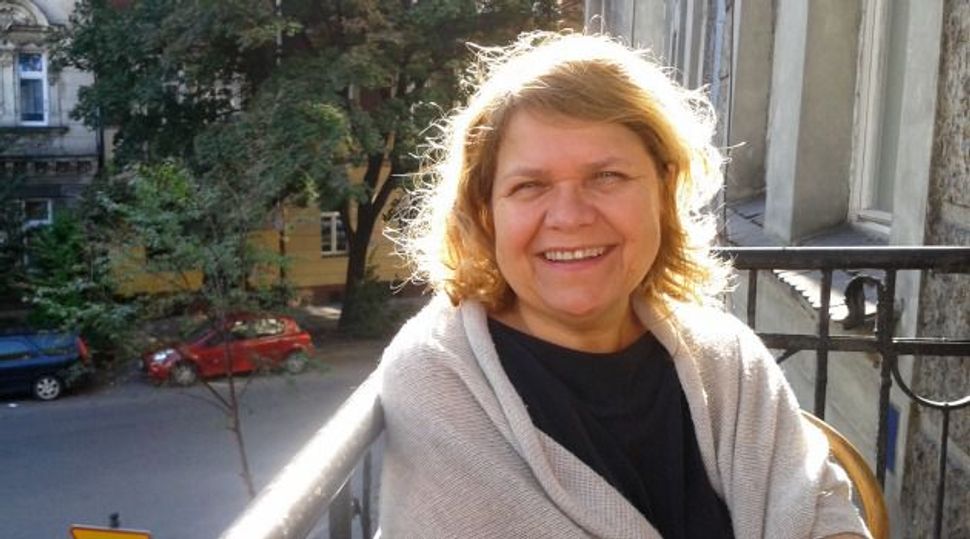 Bikont, 61, writes for Gazeta Wyborcza, one of the largest newspapers in Poland. Her column focuses on culture and on Polish-Jewish relations. But she did not learn she was Jewish until she was 33 years old.

The massacre in Jedwabne, a small village 85 miles northeast of Warsaw, was suppressed for 60 years, until historian Jan Gross exposed the atrocity in his seminal book, “Neighbors,” published in 2000. He blamed the Poles for the massacre. The book ignited a national uproar over who was guilty for this slaughter of Jews: the Germans or the Poles. It also brought about soul-searching and self-examination for residents and decendents of Jedwabne.

Bikont decided there was more to write about Jedwabne. She spent four years combing through archives and interviewing residents who survived the period of war. She found that the Jews of Jedwabne were bludgeoned, knifed and drowned. Those not already dead were locked in a barn and burned alive, while a band played to drown out their cries. Estimates of the death toll vary, but Bikont puts the number at 900.

Today a stone monument stands as a memorial near the barn where the Jews were murdered. But no blame is assigned. The Forward’s Donald Snyder spoke with Bikont about her book, its perspectives of heroes and perpetrators, and the portrait of a Polish village that looks at its dark past.

Donald Snyder: What does your book tell us?

Anna Bikont: My book is about what happened then and whether today’s residents have faced the past. I spoke to some people who were the children of the murderers. Some of them witnessed the massacre, and they remember the names of their schoolmates who were murdered. They saw their Jewish friends beaten by their fathers and their uncles. It was a horrible experience. The Jews attended the Polish school because they were too poor to have their own.

Do the Poles acknowledge they did this?

Most of them told me the Poles did not do it, but they said Jews are still hated there.

This area of Poland has a long history of anti-Semitism, dating back to before the war, when residents supported the openly anti-Semitic National Democratic Party in Poland. There was an incredibly anti-Semitic Catholic Church, and the church organized the hate against the Jews. The local priest, the late Father Edward Orlowski, who was 10 years old at the time of the massacre, told me the Jews are the cause for everything evil. Many people also blame the Jews for collaborating with the Soviet Union when it occupied eastern Poland, which includes Jedwabne, after the Nazis and the Soviets agreed to partition much of the country in 1939.

What has happened to Poland since the massacre in Jedwabne became public?

Poland lost its innocence after these revelations. Poles learned you can be a victim and a perpetrator. Unfortunately, when you ask Poles who suffered more during the war, the Jews or the Poles, most Poles would say the Poles. On the other hand, children in many places in Poland are learning about their town’s Jewish heritage. This is not happening in Jedwabne.

Was it hard to talk to the people who guarded the secret for 60 years?

Yes, it was. Most people would not talk to me when they found out I was a journalist. A few elderly women met with me secretly and still remembered the names of their schoolmates who were murdered. Father Orlowski warned them not to talk about the murders, or they would be ostracized and refused burial in a Catholic cemetery. People who spoke to me asked that I not park in front of their homes; they didn’t want their neighbors to know they were meeting with me. Sometimes I used the car of a friend from a neighboring village to avoid being identified.

How did four years researching this atrocity change you?

Before this experience, I had read one or two books about the Holocaust. I became obsessed with the Holocaust when I was doing my research in Jedwabne. It changed my feeling about being Polish. Before this I felt I was a Pole and a Jew. Now I believe I am a Pole, but not 100%. I always thought I was a Pole. I was in the underground. It was my place to live. My relations with my country are more complicated. It is difficult for me.

Some people said you became an actor in the national debate after the publication of the Gross book. Why?

What is necessary to improve Polish-Jewish relations?

Better education about the country’s Jewish heritage. The Museum of the History of Polish Jews will help create better understanding. Poland’s children’s attitudes are shaped by their parents and the church. The church is largely anti-Semitic. Without major changes in the church, it is impossible to make big changes in the attitudes of children.