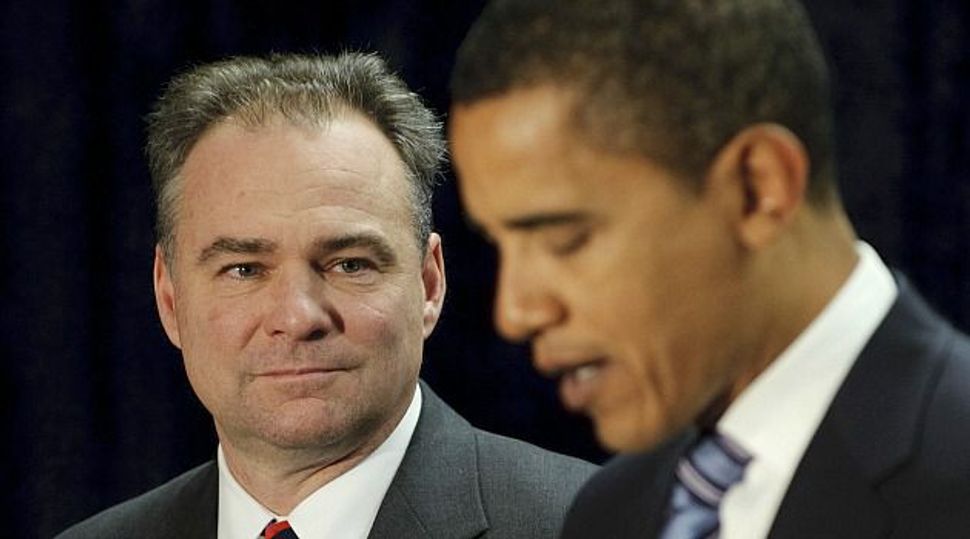 Sen. Tim Kaine is a moderate Democrat who boycotted Benjamin Netanyahu’s speech to Congress. Nathan Guttman, the Forward’s Washington bureau chief, asks him about Iran and whether Democrats are drifting away from Israel.

Nathan Guttman: Did you face any political cost for deciding not to attend Netanyahu’s speech?

Senator Tim Kaine: I’m not dumb, I knew not going to the speech might make some folks mad with me — there would be a political price, but I felt so strongly as a matter of principle that this was done in an entirely inappropriate way.

I’m a strongly pro-Israel Democrat, I’ve been to Prime Minister Netanyahu’s office three times to talk to him about Iran during his current tenure as prime minister. I agree with many of his concerns, there are one or two that I don’t agree with, but I agree with many of his concerns and I have sought out his opinion on this issue. But when I got back from Israel, the speech was announced, [and] it was, as we later learned, carefully designed to keep the White House out, to keep all congressional Democrats in the dark, even those of us who had been strong pro-Israel supporters, and in my view it was being done purely to try and influence the Israeli elections and demonstrate American support for one person and one party, which is something we should never do.

My concern about the real purpose of the speech was sort of demonstrated by the speech itself. For the prime minister to stand up and say ‘this is a bad deal’ when there is no deal, just sort of made my point. If we wait until after the elections and extended a bipartisan invitation after a framework had been announced, then the prime minister could have come and talked about a framework of a deal that was actually on the table, and pointed out the good, the bad, the ugly – here’s what’s good, here’s what’s bad. But instead, because there isn’t a deal on the table and there are even some elements of the deal being negotiated that I think are really logical that the prime minister knows [but] which he chose not to spend any time on, it was just an exercise to paint a straw man and knock it down. And I viewed it as purely an exercise focused on the politics, not the important substance.

NG: What is it about Netanyahu’s concerns regarding the Iranian deal that you agree with?

TK: The question of Iranian past behavior and would they cheat on any such deal is a very, very fair question. They cheated in the past, they violated U.N. rules in the past, and so we have to be very worried about them going forward.

Second, Iran just helped topple the government of Yemen, which is a United States ally, and that led to people flooding into the streets chanting “death to Israel; death to America,” and led to the evacuation of the U.S. embassy which is not a small thing under any circumstances.

Iran is currently engaged in efforts to topple the government of Bahrain. Our Fifth Fleet is headquartered in Bahrain, thousands of Americans who are not only performing a military mission trying to keep that part of the world safe but they’re keeping commerce open in the Persian Gulf to the advantage of the entire world.

The concern about Iranian bellicosity outside their own borders and whether sanctions relief — more dollars, gives them the ability just to do more of it, I think is a very fair worry.

They’ve gotten limited sanctions relief already and I think we have to acknowledge that some of those dollars have enabled them to prop up [Syrian leader] Bashar al-Assad or undertake actions to arm, train and equip the Houthis who knocked down the government in Yemen, so that’s a very, very legitimate concern.

NG: You co-sponsored the Corker bill, which provides Congress with a say over the Iranian deal. Now the President is threatening to veto the bill if it passes.

TK: in all likelihood, I’ll support the bill regardless of the veto threat.

I wish the president would not just have come out and said “I’ll veto it” because the message Congress receives when the president says that is, “Wow, you don’t want Congress involved. You’re negotiating about the congressional sanctions regime, you can’t keep Congress away from that.”

I really believe fundamentally that the president cannot negotiate over the congressional sanctions regime and have an expectation that congress will just stand back and not do anything on this issue.

NG: Do you feel that Israel has become a partisan issue? Do you feel distancing among Democrats from Israel?

TK: I don’t feel a distancing of Democrats from Israel, but I do feel there has been….an effort by some in the Republican Party to push Democrats out of the relationship with Israel. I’m sad that the Israeli ambassador and the prime minister went along with this. They went along with the notion of ‘we’ve got to keep this quiet and not tell Democrats.’ We feel like we’re being pushed away.

Our party has a long tradition of being pro-Israel, and being pro-Israel doesn’t mean we agree on everything, but we’re friends, we’re allies, we’re partners and to the extent we have disagreements we try to work them out productively.

NG: Is there room in the Democratic Party for members who are not pro-Israel?

TK: Everyone I know in this party is pro-Israel. This doesn’t mean we agree on everything.

I have very deep concerns about the path that leadership is following with respect to trying to find an actual implementation to what was agreed upon in Oslo in the early 1990s. I have deep concerns about the leaders, frankly, on the Israeli and the Palestinian side. That doesn’t make me any less pro-Israel. I want Israel to be safe and secure in the future and I worry that some of the activities vis-à-vis Palestine have weakened Israel’s future security, not strengthened it

We’ve got some disagreements, but I don’t know a single senator who is not pro-Israel, Democrat or Republican.