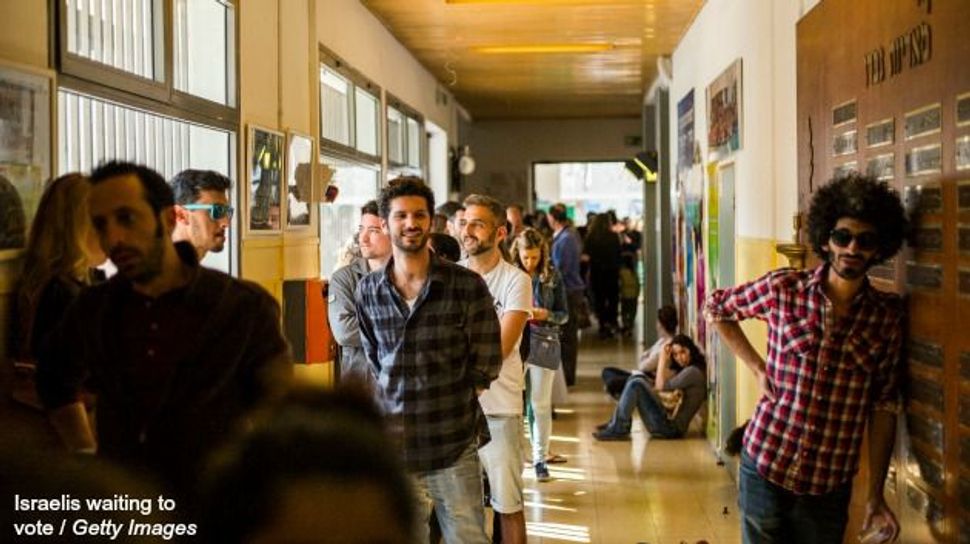 Overall turnout, which was expected to be high due to the intense emotions surrounding the campaign, has been unexceptional. As of 6:00 p.m. Israel time (noon Eastern) it was 54.6% according to Maariv, almost a full point below the 55.5% who had turned out by 6 p.m. in 2013, the last time Israelis voted. (Ynet has a chart here of voter turnout going back to 1984.) It’s also not clear who would be helped or hurt by turnout. Would a strong showing mean Israelis were pouring out to register their discontent with Prime Minister Netanyahu, or that Bibi had managed to rally his troops at the last minute to turn back the leftist tide? Unclear.

There are conflicting reports about turnout among Israel’s Arab citizens. Activists have been predicting for weeks that the unification of the three Arab and Arab-backed parties — Islamist, Palestinian nationalist and Jewish-Arab communist — would increase enthusiasm and turnout, boost the Joint List up from the 12 seats predicted in the polls to 14 or 15 and effectively block the right from returning to power. Prime Minister Netanyahu played on that to raise fears among his own voters, “warning” in a video this morning that Arabs were being bussed to the polls “by the left” and voting “in vast numbers.” The left-leaning [Haaretz reported][3] just after noon that turnout was above average in Arab precincts. But Ynet reported just before 4 p.m. that Arab voter turnout was about average or slightly below, and Maariv reported the same thing from its own sources at 6:45 p.m.

The right-wing news site NRG quotes Bar-Ilan University political scientist Asher Cohen suggesting that a high Arab turnout could have a double-edged impact on the outcome of coalition negotiations.

It will help Zionist Union leader Yitzhak Herzog in the first stage, the seven days after the official returns are announced (beginning March 24, that is) when parties meet with President Reuven Rivlin to make their recommendations about who should be tapped to try to form a government, by giving Herzog a large bloc of Knesset members recommending he be given the baton.

But in the second stage, the 28 to 42 days allotted to the prime minister-designate to form his coalition, it will hurt Herzog by leaving a large pool of lawmakers who by mutual consent won’t be available to join his coalition, leaving him stranded, short of a Knesset majority and possibly ceding the final victory to Netanyahu.

But here are two other possibilities:

One is that the Joint List of Arab parties could break up after the election as the Palestinian-nationalist Balad and Islamist Ra’am parties refuse to consider joining a coalition and the Jewish-Arab communist-led Hadash breaks away with its four lawmakers to make itself available. Jewish parties have refused in the past to sit in a coalition with any of the Arab parties, including Hadash. But the act of breaking away from the Joint List because of commitment to Israeli society could give Hadash a new legitimacy in the eyes of the Israeli center bloc. Stranger things have happened.

The other, more likely scenario is that Herzog will run out his 42 days without managing to form a coalition, after which Netanyahu will get 28 days to try his hand — and fail. The baton then goes to the Knesset, which would have three weeks to try and come up with a different combination. If that doesn’t work either, the voters go back to the polls 90 days later.