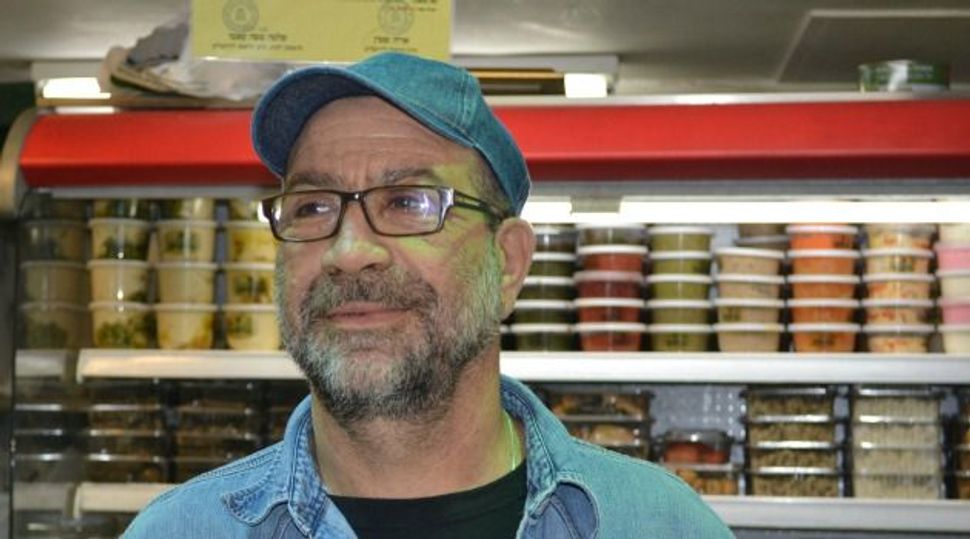 Mahane Yehuda is considered a Likud stronghold, and shop owners were worried in the weeks leading up to the election.

“They believed the polls,” said Yaron Tzidkiyahu. In a market full of amateur political pundits, nobody is as sought after by the media as Tzidkiyahu, who dishes out political commentary alongside glistening olives, pickles, and garlic.

On Wednesday afternoon, the market brimmed with pomegranates, fresh fish and rounds of halva. Tourists, locals and Israel’s Channel 2 news crew roamed about, soaking up the post-election atmosphere. A van decorated with a poster of Netanyahu and four large flags — three Likud and one Israeli national flag — drove by.

Tzidkiyahu was apprehensive for Tuesday’s vote even as he voted for far right Yisrael Beiteinu’s Avigdor Lieberman, breaking with his 40 year personal tradition of supporting Likud. In an interview with the Guardian before the election, Tzidkiyahu said that Netanyahu hadn’t done enough to help Israel’s struggling economy.

But now that Netanyahu had won, Tzidkiyahu said he wanted to clarify that he was never anti-Bibi. As much as he wanted the prime minister re-elected, he was even more concerned about Lieberman losing, now that the vote threshold to enter the Knesset had been raised. That initiative was steered by none other than Lieberman himself to marginalize Arab parties. Yisrael Beiteinu received six mandates on Tuesday.

“I had a slogan 10 days before the election: ‘I love you, Bibi, but I’m choosing Lieberman.’ It wasn’t being critical, it’s just what I was feeling,” said Tzidkiyahu, who was wearing a denim hat, black Ray Ban sunglasses and a green apron.

“Lieberman’s appearance is powerful. I think that comparing him to Herzog, Herzog is a little boy,” he said, referring to the Zionist Union’s Isaac Herzog, who was inaccurately predicted to out-poll Netanyahu. “It’s very important that someone like Lieberman is next to Bibi.”

Vendors at Mahane Yehuda said that Netanyahu won because Israel’s media — which they claimed was biased toward the left — overstated Herzog’s appeal with the Israeli public. “They made panic” among the right, said Eyove Levy, who operates a fruit stand in the market.

Not everyone in Mahane Yehuda was pleased with Likud’s win.

“For me, it’s the biggest catastrophe,” said Yanki Behar, a bartender at the market’s Casino de Paris bar. Behar has a buzzed head, earrings and a vertical strip of grey hair on his chin. He said he voted for Meretz. “I consider myself a socialist, and I consider myself on the left side of the political map.”

Behar said he thinks it’s time to cash in on his wife’s German citizenship and move abroad. “I said, OK, fine then. I want to sit in the Black Forest and smoke pot.”

Ibrahim, one of the many East Jerusalem Palestinians who works in the market, said that Netanyahu’s win spelled more Jewish settlements in his part of town. Like most East Jerusalemites, Ibrahim, who chose not to give his last name for privacy reasons, is a resident and not an Israeli citizen, which means he can’t vote for the Knesset.

Still, Ibrahim predicted the election’s outcome better than many of Mahane Yehuda’s politicos. Of Netanyahu’s win, he said simply: “I expected it.”