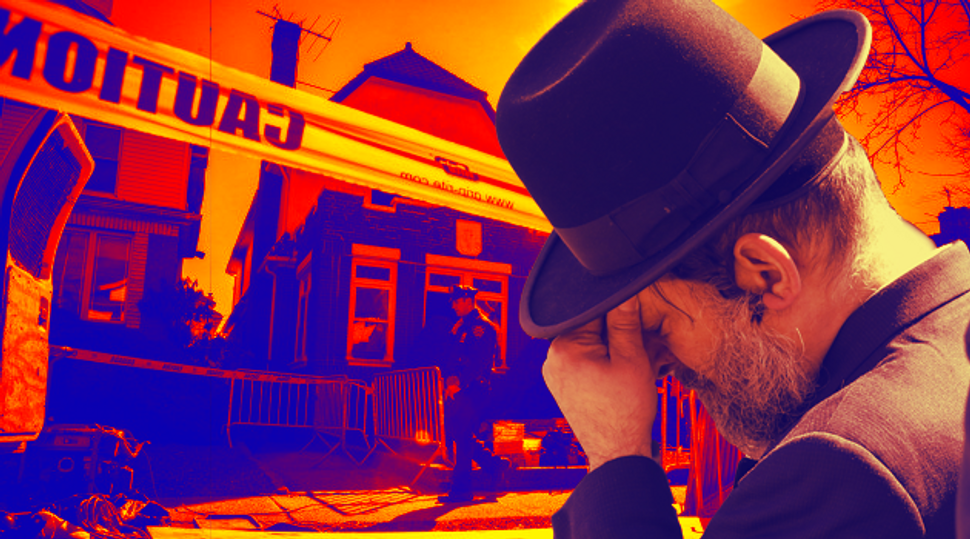 An Orthodox man looks at the scene of the fire in Midwood, Brooklyn / Getty Images

You never want Shabbat to end on a tragic note. Yet among the the rush of messages that blipped across my phone when I turned it on Saturday night was news of the death of seven children in Brooklyn’s Midwood neighborhood. A malfunctioning hotplate left on for Shabbat, it seems, somehow sparked a fire. According to the New York Times, it was the worst fire in the city since 2007.

When faced with such momentous tragedy, the emotional impact so fresh and raw, the responses vary. Some cry, some remain silent, others choose to act. What is clear though, is that tragedy must serve as an impetus to bring more good into this world, to create positive action and light in the face of the void.

That’s why, despite the general outpouring of grief, it has been so startling and cruel to witness an insidious undercurrent in some responses.

In a post published here in the Forward, J.J. Goldberg penned a particularly cynical piece. The fire, he wrote, was “at least the fourth deadly blaze in the borough resulting from Sabbath and holiday observance in the past 15 years.” Bolstered by a sensationalist headline boasting a “deadly plague of Sabbath fire,” his reasoning seemed crystal clear: Look at the observance of the so-called “ultra-Orthodox”! Look how they needlessly endanger their own lives and the lives of others!

Sadly, Goldberg is not alone in this sentiment.

Flicking through the anonymous location-based sharing app Yik Yak, I noticed trolls taking to the internet to taunt the Jewish community of Crown Heights. “Are you just ending your Sabbath observance now?” one user asked. “Can you explain to me why it is better have a house burn down and 7 kids die than to offend by turning off a hot plate?”

Comments on various sites such as the Daily News and Gothamist were no more hospitable.

There is a predictable current and pulse to the line of thinking that propels these half-formed op-eds and anonymous comments. It is the sinister sentiment that scuttles along the edges of tragedy, the wagging finger that calls out “Haredim!” as if they alone are somehow specifically deserving of tragedies like this. It is unseemly and disgraceful.

Why is it that when tragedy strikes very specific segments of the Jewish community, it is somehow excusable to exploit the very real pain and suffering of human beings to condemn their practices and beliefs? If the belief itself could be seen as a direct and immediate cause to the tragedy, perhaps there would be room to fathom a response. Not one so immediate, callous or cruel as those seen online the other night, but at some point a reckoning could be imagined. But this fire, these painful deaths…how cruel can a person be to attack a suffering community over an electrical fire — over an accident that knows no race, religion or creed, that can and does strike people of every socioeconomic level and in every demographic.

More people have died from drowning in swimming pools or been injured from ingesting grill cleaning bristles than from hotplate fires, according to the CDC. Should we condemn the observance of the 4th of July?

When we experiences a tragedy, the course of action is clear: We must come together, to mourn and to sanctify the life that has been lost, to bring good deeds and positive actions to this world. That does not preclude making sure those around us are safe, that smoke detectors are properly installed and that electric equipment is used safely. But it most certainly does not give a space for vicious and frankly specious attacks on the grieving.

Yesterday afternoon, while walking down the streets of Crown Heights, I noticed a house with a front door ajar. Half cast in shadows, an elderly gentleman sat in a chair, looking coolly out on the sunny streets.

“Hey man,” he called out to me in his Island brogue. “I’m sorry about your loss. I’m sorry, man.”

That is community. That is New York.

Mordechai Lightstone is a rabbi, a director of digital communications, and the creator of exceptional experiences for Jews in tech and digital media. He can be reached on Twitter @Mottel