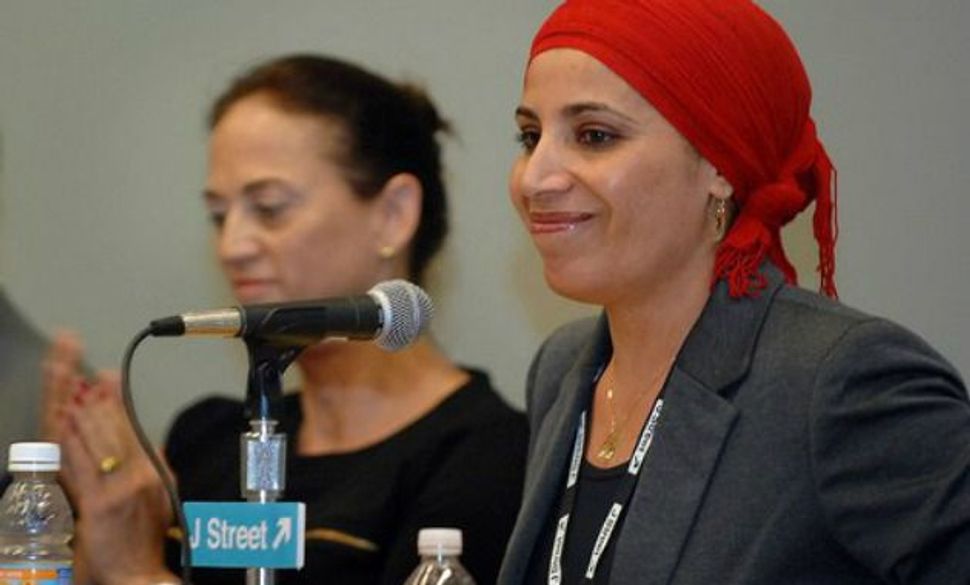 For the Jews who attended this year’s J Street Conference, the event was an expression of community, idealism and ideology. In a way, it was about how Israel was all about us, the Jews. It was about our values and our identity, which have been so inextricably intertwined with the state of Israel since 1967. And about how the re-election of Netanyahu, for a fourth term in office, was a turning point for liberal American Jews.

Even the panels that included Palestinians, whether they were citizens of Israel or from the occupied territories, were less about Palestinian rights and more about how realizing their rights would affect the Jews’ status in Israel.

This was understandable, since J Street is a mostly Jewish NGO that calls itself “pro-Israel and pro-peace,” and which has a mandate to work for a two-state solution — one for the Jews and one for the Palestinians. But it also made the conversation a bit stale. We have been over and over the questions of whether or not liberal Zionism is still relevant, or whether or not external diplomatic pressure on Israel will be effective in ending the occupation. It doesn’t feel as though there is anything new or insightful to say on that subject.

For me, the most insightful observations came from non-Palestinian Arabs who attended the conference, and from the responses they received to their questions, which illustrated a genuine curiosity about what Israelis thought of them and of Israel’s place in the Middle East.

At one panel I moderated, an Arab in the audience asked Aluf Benn, the editor in chief of Haaretz, if Israelis were interested in how the Arab media covered the results of their election. Benn’s response, delivered with a rueful smile, was a monosyllable: “No.”

At another event, a man from the Gulf approached Zionist Union MK Stav Shaffir and suggested that if Israel were to make peace with the Palestinians, it would not have to rely on the United States for diplomatic and financial support anymore, because it would become accepted in the Arab Middle East.

Shaffir initially tried to brush him off, saying she was in a hurry, but when he politely rephrased the question she answered brusquely that Israel would always need the United States. She did not seem to have given any thought to the question, or to its larger meaning — i.e., here was a man from an Arab country that has no diplomatic relations with Israel, suggesting to her that if Israel were to indicate receptivity, it would become an accepted part of the Middle East. This fact did not elicit the slightest indication of curiosity on the part of Israel’s youngest member of Knesset.

We are accustomed to a very shallow interpretation of Israel’s relationship with the Middle East — that we have pragmatic “cold peace” with Jordan and Egypt, and that the rest are all just waiting for an opportunity to attack and destroy us. The truth, of course, is far more nuanced and complex. By placing Israel only in an emotional framework (the homeland of the Jewish people) or a simplistic one (the Middle East’s only democracy, surrounded by enemies), we are ignoring reality — at our peril.

At the risk of stating the obvious, Israel is physically located in the Middle East. Its alliance with the United States and its support from Europe are not guaranteed forever and ever, but its geographical location certainly is. We would do well to look around and take an interest in what our neighbors are saying and thinking — and no, that does not mean watching the occasional MEMRI-translated sensationalistic TV clip.