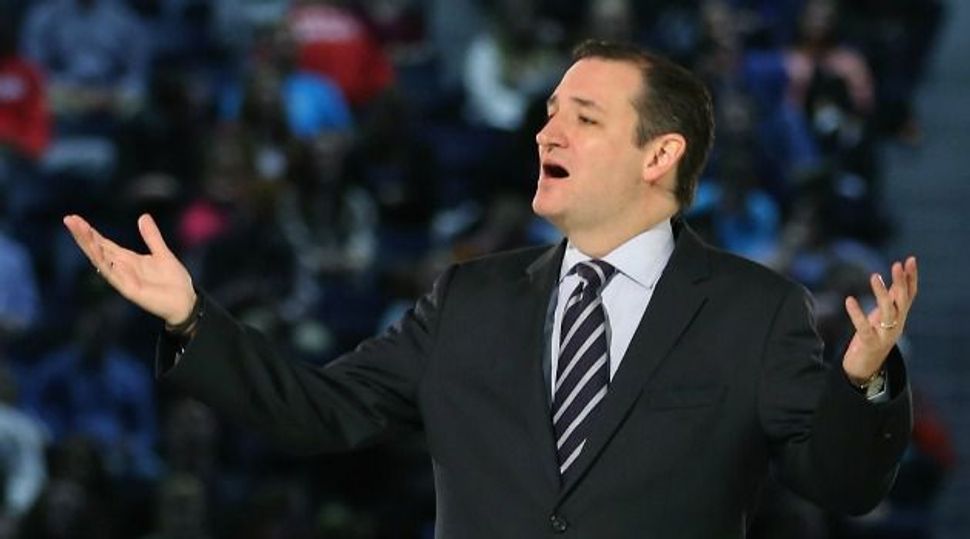 Shmuley Boteach may have just dropped a major clue in one of the biggest mysteries of the 2016 Republican primary: Who does Sheldon Adelson like?

In an email yesterday, Boteach’s charity, This World Values Network, announced that Texas senator and Republican presidential candidate Ted Cruz would be a guest of honor at its May 28 gala. Also being honored? Sheldon Adelson… and Newt Gingrich.

The winner of the Jewish Las Vegas casino mogul’s political favor will profit mightily from his blessing. Adelson spent nearly $100 million in the 2012 election, singlehandedly buoying Gingrich in his doomed primary run and throwing millions more to Mitt Romney. Republican presidential hopefuls have been courting Adelson since early last year, traveling to speak to a Republican Jewish Coalition event in Las Vegas last March and making phone calls and other personal pleas.

The Washington Post reported last March that Adelson was looking for “a more mainstream Republican with a clear shot at winning the White House” in 2016. That points away from Cruz, a Tea Party favorite who is expected to struggle mightily to establish himself as a top-tier candidate.

Yet Cruz is spending a lot of time buddying up with Adelson’s buddies. Last September, Cruz was the headliner at the annual dinner of the Zionist Organization of America, a right-wing group that is heavily funded by Adelson.

Now, Cruz seems to have made a friend in Shmuley Boteach, an Adelson confidant and beneficiary whose charity received $639,000 from Adelson 2013.

In early March, Cruz sat on a Boteach-led panel about the threat posted by Iran. (This was the event advertised with a full-page ad in the New York Times calling National Security Advisor Susan Rice “blind” to genocide.) Adelson sat in the front row at that panel, and, according to a report in the National Journal, Cruz appeared to be talking right to him.

“Cruz seemed to appeal to the influential donor, calling a nuclear Iran the ‘single greatest national security threat facing both the nation of Israel and the United States,’” National Journal reported.

Boteach’s May gala will give Cruz another chance. The rabbi and writer, who ran for the House of Representatives as a Republican in 2012, honored the actor Sean Penn and New Jersey Senator Cory Booker at his 2014 gala. Besides Cruz, other honorees at the 2015 gala include Democratic New York Congresswoman Carolyn Maloney and Democratic New Jersey Senator Robert Menendez, who faces an impending indictment on federal corruption charges, according to reports in multiple outlets.

Other Republican primary hopefuls will have their chance to lobby Adelson, too, but not at Boteach’s gala. That opportunity will come on April 25, when the Republican Jewish Coalition — another Adelson-backed group — holds a meeting at Adelson’s casino in Las Vegas. Indiana governor Mike Pence and former Texas governor Rick Perry will attend, along with Cruz, according to Politico.

The big question, then, in Jewish Republican presidential politics: Will Cruz’s efforts with Boteach be enough to sway Sheldon Adelson?