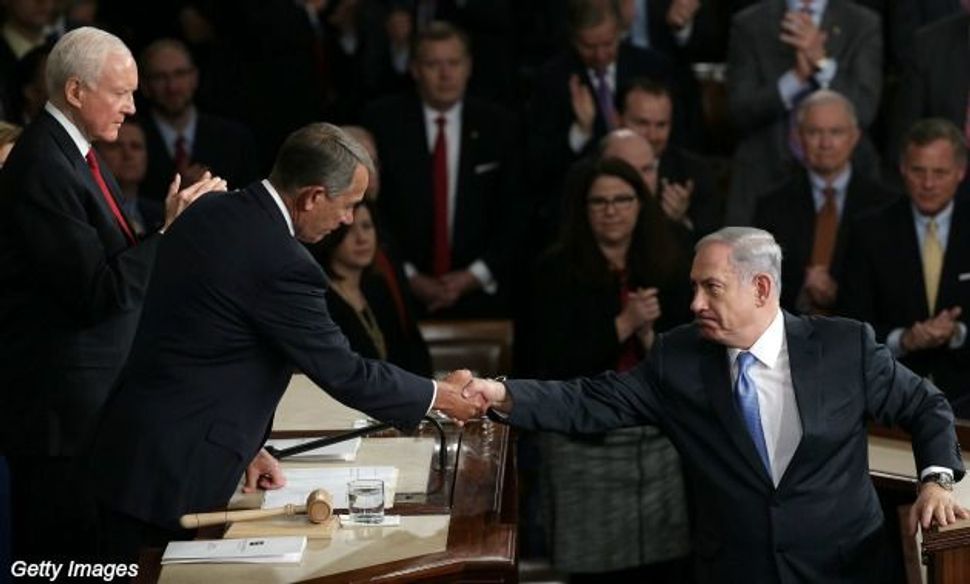 In case you missed it: The No. 1 best comedy line of the weekend came from one of our best deadpan straight men, House Speaker John Boehner, Republican of Ohio.

It came during a Sunday interview with CNN’s Dana Bash on “State of the Union.” They were talking about the Israeli prime minister’s flip-flop on Palestinian statehood just before and after Israel’s March 17 election — how on March 16, in Bash’s words, “he disavowed the two-state solution, and then right afterward he said ‘never mind’ and took it back. Isn’t this a little brazen?” No, Boehner said, “because he doesn’t have a partner.” He said he believes Netanyahu still believes in Palestinian statehood as “an aspirational goal.” Well, Bash asked, “Can you blame the White House or the president for not believing what he’s saying on where his position is on this?”

I think the animosity exhibited by our administration toward the prime minister of Israel is reprehensible. I think that the pressure that they’ve put on him over the last four or five years has frankly pushed him to the point where he had to speak up.

Get it? The animosity exhibited by our administration toward the prime minister of Israel is “reprehensible.” This from a guy who’s been virtually silent for six years — four of them as the leader of the Republican party — while members of his caucus and his party have directed an unending barrage of slander, character assassination and borderline obscenity at the president of his own country.

Think I’m exaggerating? In January 2011, days after Boehner’s Republicans took over the House and elected him speaker, Brian Williams asked him during an NBC Nightly News interview what he had to say to members of his party who claimed Obama wasn’t born in America, wasn’t a citizen and wasn’t legitimately president. Boehler’s reply:

Brian, when you come to the Congress of the United States, there are 435 of us. We’re nothing more than a slice of America. People come, regardless of party labels, they come with all kinds of beliefs and ideas. It’s the melting pot of America. It’s not up to me to tell them what to think.

Translation: Shucks, I’m only a politician, head of the Republican Party. I can’t advise Americans on how to view the world. What am I, a leader?

Six weeks later, during an interview on Meet the Press, Boehner repeatedly denied he had any responsibility to speak out when Republicans claimed the president was a foreign-born Muslim.

He noted that the state of Hawaii said Obama was born there, and that the president himself said he was a Christian, and “I’ll take him at his word” — strikingly, the same phrase Obama himself used last week to say that he believed Prime Minister Netanyahu’s March 16 disavowal of the two-state solution: “I take him at his word.”

Host David Gregory had led off by playing a Fox News clip showing Iowa Republicans in focus groups saying they believed Obama was a Muslim. Here’s what followed:

Gregory: Do you not think it’s your responsibility to stand up to that kind of ignorance?

Boehner: David, it’s not my job to tell the American people what to think. Our job in Washington is to listen to the American people. Having said that, the state of Hawaii has said that he was born there. That’s good enough for me. The president says he’s a Christian. I accept him at his word.

Gregory: But isn’t that a little bit fast and loose? I mean, you are the leader in Congress and you are not standing up to obvious facts and saying these are facts, and if you don’t believe that it’s nonsense?

Gregory: But that kind of ignorance over whether he’s a Muslim doesn’t concern you?

Boehner: Listen, the American people have the right to think what they want to think. I can’t — it’s not my job to tell them.

By way of context, the exchange came after several polls over the preceding months had shown Republicans holding a whole range of bizarre views of Obama, which the national leadership, including Boehner, had made no effort to dispute.

In March 2010, a Harris Interactive poll found that majorities of Republicans believed Obama is a socialist (67%), wants to take away Americans’ right to own guns (61%), is a Muslim (57%) and “wants to turn over the sovereignty of the United States to a one-world government” (51%).

Also, 24% of Republicans believed Obama “may be the Anti-Christ” and 22% believed he “wants the terrorists to win.”

Here’s what Boehner had to say about the widespread Republican, um, animosity toward the president of the United States: [nothing].

In the years since then Boehner has been true to his principles, sitting silently while members of his own caucus have come up with a wide range of baroque insults to direct5 at the president. During the 2014 State of the Union address, for example, Texas Rep. Randy Weber tweeted from the House floor that Obama was “Kommandant-in-Chief” and a “Socialistic dictator.”

In January 2015 Weber complained about Obama’s failure to attend the Paris rally following the Charlie Hebdo massacre in a tweet that compared him (unfavorably) to Hitler: “Even Adolph [sic] Hitler thought it more important than Obama to get to Paris. (For all the wrong reasons.) Obama couldn’t do it for right reasons.”

Weber apologized the following day — not to Obama but to Holocaust survivors:

It was not my intention to trivialize the Holocaust nor to compare the President to Adolf Hitler. The mention of Hitler was meant to represent the face of evil that still exists in the world today. I now realize that the use of Hitler invokes pain and emotional trauma for those affected by the atrocities of the Holocaust and victims of anti-Semitism and hate.

Here’s what Boehner had to say about Weber’s slurs against the president: [nothing].

It should be borne in mind, by the way, that Obama’s rough treatment of Netanyahu follows six years in which Netanyahu has repeatedly humiliated, undermined and sabotaged the president publicly. And while both leaders have tried to keep their very profound disagreements on the substantive plane and avoid descending into personal invective, Netanyahu’s allies and surrogates haven’t been so delicate. Recall the moment in January 2014, at the height of Secretary State John Kerry’s effort to promote Israeli-Palestinian peace talks, when Israel’s Defense Minister Moshe Ya’alon was quoted (accurately) saying that Kerry was “acting out of a misplaced obsession and messianic fervor” and that the “only thing that can save us is for John Kerry to win a Nobel Prize and leave us in peace.” That actually drew a mild scolding from Netanyahu on the Knesset floor, followed by a non-apology apology from Ya’alon (who “didn’t mean to insult” Kerry).

From Obama’s point of view, though, the relationship probably reached a breaking point on Israel’s election day. That was the day Netanyahu mobilized his voters by warning in a video that his incumbency was “endangered” by Arab Israeli citizens “streaming to the polls in droves.” It was just 10 days earlier that America’s first African American president had flown to Selma, Alabama, to commemorate the sacrifices made by blacks and whites a half-century ago in the struggle for minority voting rights.

It’s worth recalling an incident last October, after Jeffrey Goldberg (no, that’s not me) reported in The Atlantic about an unnamed White House official calling Netanyahu “chickenshit.” The anonymous insult prompted a reply from Israel’s economics minister, Naftali Bennett, leader of the settler-backed Jewish Home party, warning on his Facebook page — in a phrase borrowed from former Republican presidential candidate Mitt Romney — that Obama was “planning on throwing Israel under the bus.”

Bennett went on to write:

The prime minister is not a private individual, but the leader of the Jewish State and the Jewish world as a whole. Serious curses such as these against the Israeli Prime Minister are harmful to millions of citizens of Israel and Jews worldwide.

Exactly. The thing is, it goes both ways.