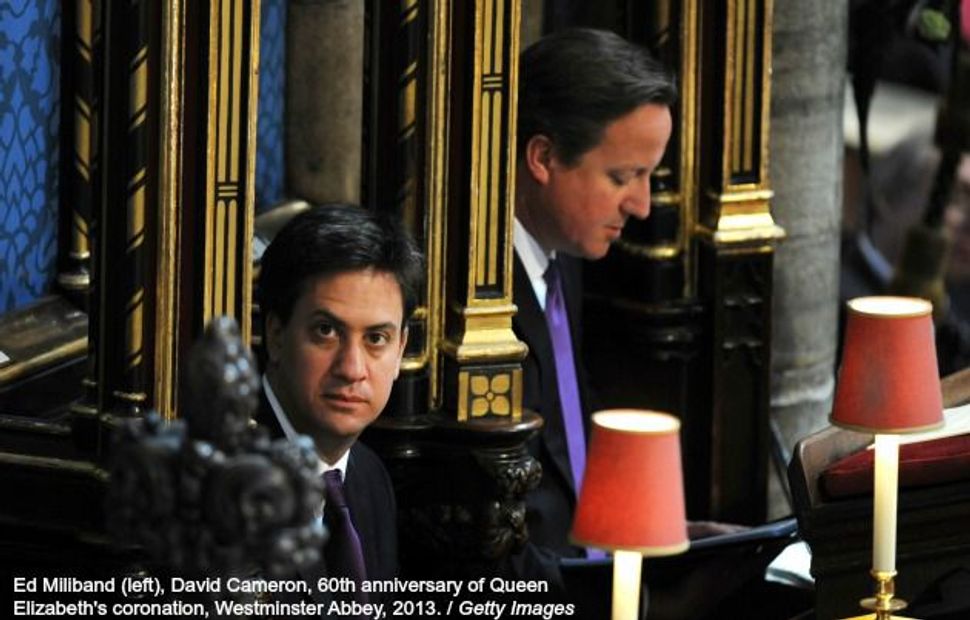 Britain may be on the verge of electing its first affirming Jewish prime minister, Labour Party leader Ed Miliband.

Conservative Prime Minister David Cameron formally told Queen Elizabeth on Monday that he had dissolved Parliament in advance of the May 7 election, marking the end of his five-year term. But the campaign began in force last week with a televised debate between Cameron and Miliband.

Snap polls after the Thursday debate showed Cameron as the narrow winner, but an in-depth, two-day poll released Monday, conducted by YouGov for the conservative-leaning, Murdoch-owned Sunday Times, found Labour leading the Conservatives 36% to 32%.

Several smaller parties are also running, including the Liberal Democrats, junior partners in Cameron’s outgoing government, who score 8%, and the anti-immigration United Kingdom Independence Party (UKIP), at 13%. The Scottish Independence Party scored 45% in Scotland, which could hurt Miliband in a key Labour stronghold.

Miliband, 45, took over the Labour Party in 2010, the year Cameron became prime minister by defeating Labour incumbent Gordon Brown. Miliband won the party leadership in a surprise, close-fought primary battle against his older brother David, who had been expected to inherit the leadership after Brown retired.

They had been personally close before Ed jumped into the leadership race, and promised throughout the primary to remain “best friends” and advisers to one another. After Ed’s victory, though, David sat quietly on the back benches of Parliament and then quit Parliament and moved to New York in 2013 to become head of the International Rescue Committee.

The brothers are heirs to one of the more notable legacies in British socialism as the sons of the late Ralph Miliband, a leading Marxist intellectual and one of the founders of the British new left. The elder Miliband had been born in Belgium to parents who fled Poland after World War I. He was introduced to socialism in his teens as a member of the left-wing Zionist youth group Hashomer Hatzair. Their mother, the Polish-born Marion Kozak, now 81, is an important progressive figure in her own right, known as a prominent feminist and human rights activist.

Ed Miliband made a number of strong public statements about his Jewish identity after winning the Labour Party leadership and has spoken frequently about it since then.

He gave an interview to the Jewish Chronicle in November 2010, immediately after the primary, and contributed a highly personal essay to a special 2012 issue of The New Statesman on British Jewish identity. In both he wrote of his identification with Israel, the Jewish people and Jewish values. He also lamented the fact that his parents hadn’t raised him as part of a tightly connected Jewish community and that he’d “missed out” on bar mitzvah and membership in a youth movement.

“I am not religious,” he wrote in The New Statesman. “But I am Jewish. My relationship with my Jewishness is complex. But whose isn’t?”

And he told The Jewish Chronicle:

“My Jewish identity was such a substantial part of my upbringing that it informs what I am,” he said. “I visited Israel as I was growing up because my grandmother was living there. I visited for the first time when I was seven, so I was always very aware of my Jewish relatives living in Israel.”

Speaking to the Jewish Chronicle in his office in the House of Commons, the new Labour leader emphasised that his Jewish heritage is more than a mere accident of birth, “I think there was a set of values my parents taught me about justice and making the world a better place, which are recognisably ‘left’ values but also owe something to the Jewish tradition.”

He said he remains envious of his parents’ community of Jewish friends: “I sometimes hanker after what they had, which was not just a political community but a recognisably Jewish community: people who had been on Jewish youth groups and probably had more fun than I did when I was growing up.”

His positions on Israel put him in a ticklish position. Heading a party with a strong anti-Israel wing in the unions and on campuses, he gets attacked from the left (here for example) for being too pro-Israel and from the Jewish community (see here and here) for criticizing Israeli policies and actions.

Speaking to the Board of Deputies of British Jews in 2013, he was quoted saying he “considered himself a Zionist but was critical of some Israeli government policies.” A year later, in an April 2014 talk at Hebrew University in Jerusalem, he reportedly declined to call himself a Zionist, though he affirmed his belief that Israel is “a homeland for the Jewish people.”

In June 2014, just after the kidnapping of three yeshiva students in the West Bank but before the Gaza war began, he addressed Britain’s Labour Friends of Israel (text here), discussed his April trip to israel and presented his most detailed elaboration of his views on Israel. It ranged from his personal relationship to the country and the Jewish community to his position as Labour Party leader. He defended Israel’s right to protect itself from rocket fire but sharply criticized Israeli settlements in the territories. Among other things:

Most conflicts are unresolved because we do not know what an agreement looks like. What came home to me on this trip was reasonable people on both sides have a sense of what a resolution looks like.

We know that compromises in key areas must be made on both sides. We must also do nothing that will get in the way of peace. So we are clear that the threat of boycotts of Israel is the wrong response. We do and we will resolutely oppose the isolation of Israel. And my party does so.

No one in my party either should question Israel’s right to exist. And what is our role in all this? As friends of Israel.

Not long after that, however, Miliband became a sharp critic of Israel’s conduct during the Gaza war. In October 2014 he ordered his party’s lawmakers to vote in favor of a nonbinding parliamentary motion recognizing the state of Palestine. That prompted reports of Jewish donors abandoning the Labour Party in protest.

Some commentators say Britain’s first Jewish prime minister was the influential 19th century statesman Benjamin Disraeli, who was born Jewish but baptized by his parents at age 12 and remained a practicing Anglican throughout his life. He sometimes referred to himself as Jewish, but had no active connection to Jewish affairs.

As it happens, Cameron’s predecessor as Conservative Party leader, Michael Howard, who served from 2003 to 2010, while the party was in opposition, was Jewish. The fact that a Jew has headed one or the other of Britain’s two major political parties continuously for the last 12 years has to complicate one’s understanding of the supposedly tenuous place of Jews in Britain today amid a numerous reports of rising anti-Semitism.