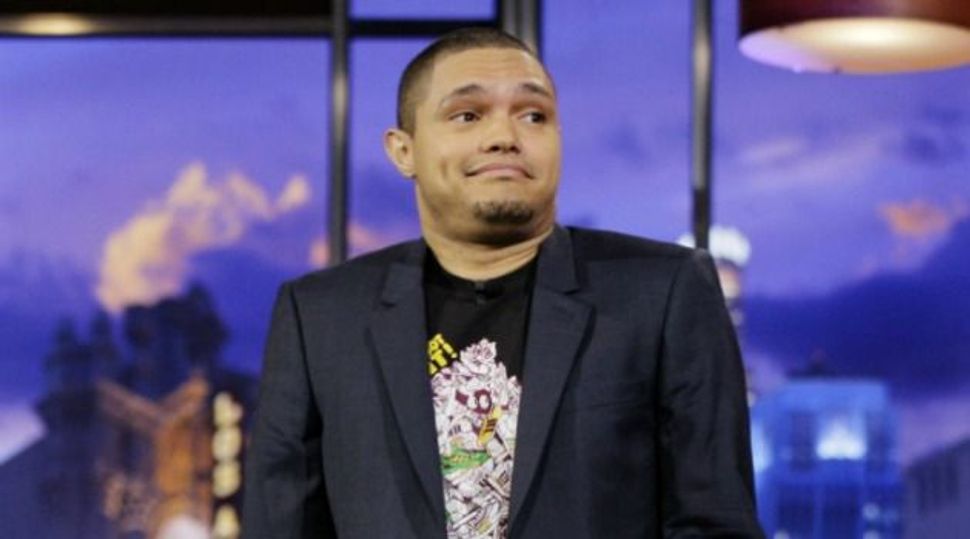 Anti-Semitism is real. The fatal shootings at the Jewish Museum in Brussels, outside the JCC in Kansas, at the Paris kosher market, outside the Copenhagen synagogue — tragic and scary. Four jokes tweeted by Trevor Noah, who will replace Jon Stewart as host of the Daily Show? Not so much.

When it comes to themes that spark people’s most irrational, knee-jerk reactions, two stand out: humor and anti-Semitism. But when discussions center on anti-Semitism and humor at the same time, the level of analysis can reach an all-time low.

If Lena Dunham — who is Jewish (on her mother’s side) and born and raised in New York City — got smeared last week for affectionately comparing her endearing Jewish boyfriend to her endearing dog, then Trevor Noah — who is biracial South African — didn’t stand a chance for the things he said about many groups, including Jews. Noah is actually a quarter Jewish (his mother is half Jewish) but that passed most critics by.

Many of Noah’s defenders argue that finding a few offensive tweets is inevitable. And the statistics certainly don’t suggest a comedian obsessed with hating on any particular group or hating at all, really. Among the (at the time of this writing) 8,827 tweets penned by the comedian since 2009, 6 (or .00068%) have been deemed “off-color,” “offensive,” “problematic.” Of those, 4 have been called “anti-Semitic.” That seems like a very low percentage.

But, to be fair, the number of tweets isn’t the only issue. There is quantity and there is quality. Surely if Noah’s 4 tweets had wished death on a certain group, called for genocide, encouraged genital mutilation, or denied the Holocaust, those 4 would be enough, or dayenu.

Just as the small number of tweets doesn’t automatically exonerate Noah, neither do the arguments coming from the anti-PC camp. Stop being so sensitive, freedom of speech, comedy is comedy — these miss the point. Yes, comedy should entertain, yes, people have a legal right to say what they want and yes there are incredibly annoying people out there who are so PC and myopic, they miss or don’t allow for satire even as it takes aim at oppression and bigotry. (As a comedian who performs and writes, I’ve often encountered this counterproductive rigidity and it is incredibly frustrating.)

But just as comedians have the right to say what they want to say, people have the right to respond by criticizing them — and to protest, for example, a certain comedian being picked to replace Jon Stewart on the Daily Show.

In this case, we have the right to react and even pressure Comedy Central to fire Noah, if we think that’s the right thing to do. But is it?

Before looking at the actual tweets that have been labeled anti-Semitic, let’s quickly review the definition of anti-Semitism: “hostility toward or discrimination against Jews as a religious, ethnic, or racial group.” So, do the following tweets make the anti-Semitic cut?

Almost bumped a Jewish kid crossing the road. He didn’t look b4 crossing but I still would hav felt so bad in my german car!

If Noah were actually advocating for running over Jews, this would be undeniably anti-Semitic. At worst, this joke trivializes the Holocaust. On the plus side, in an age of Holocaust denial, it’s refreshing to see a joke based on the premise that this thing really did happen!

Behind every successful Rap Billionaire is a double as rich Jewish man. #BeatsByDreidel

The most unjustifiable thing about this tweet is that Noah chose to use “double” instead of “doubly.” The word takes up no more characters and it makes the joke much more fluid.

On a more serious note, this joke definitely plays on tired and worn-out stereotypes about Jews running the media. But the Dr. Dre/Dreidel pun is somewhat funny and I’m impressed that he knows what a dreidel is. This may have a hint of hostility towards Jews, but it seems more like a funnyman trying to be funny than actual, serious, wide-ranging hatred. I would say this is as close to anti-Semitism as Noah gets.

Sorry, but this joke definitely does not make the cut. It is critical of Israel, which it presents as a hawkish nation, but not of Jews. What is anti-Semitic, ironically, is conflating Jews with Israelis and/or the Israeli government.

As a Jewish woman, I find this tweet the hardest to grapple with. Should I be offended by this? Would I rather he compare us to an athlete who does go down easy? I think I have to recuse myself.

But if you’re asking me whether I think that, generally speaking, Trevor Noah is an anti-Semite or someone we should be worrying about? No, no he’s not.

Katie Halper is a comedian, writer and filmmaker, born, raised and still living in New York City. Find her at @kthalps or www.katiehalper.com