After Iran Deal, Time for Bibi To ‘Reassess’ Quixotic Fight 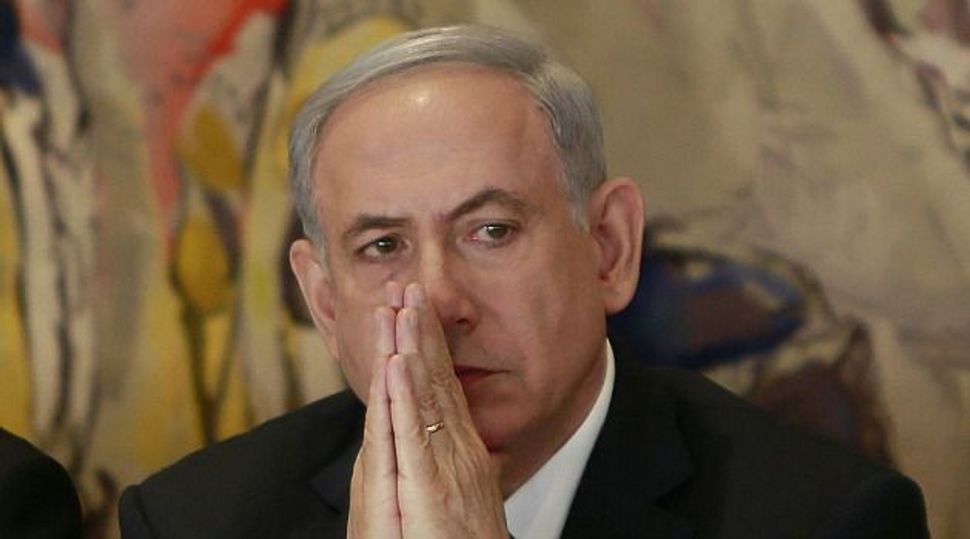 The public debate over the emerging nuclear deal has been waged in recent weeks mostly ex parte: the critics have had the stage mostly to themselves. Out of concern for the ongoing talks and uncertainty about their end result, President Obama and administration officials have maintained a relatively low profile and have left the criticism hurled at them mostly unanswered.

On Thursday, however, a few minutes after the Lausanne parameters were announced, the temporary cease fire was over: Obama came out with guns blazing to launch an all-out campaign aimed at winning over the American public so that it will in turn subdue the expected uprising in Congress.

Standing in the Rose Garden, the president went all out, as if he might overwhelm his critics with his sweeping and unequivocal rhetoric: This was “a historic understanding” that will “make our country, our allies and our world safer.” It was a “good deal” that would “cut off every pathway that Iran could take to develop a nuclear weapon.” It was on a par with historic Cold War arms control agreements with the Soviet Union and it is, he asserted, “our best option by far.”

For good measure, Obama even cited the famous, emotionally-laden line from Sam Cooke’s “A Change is Gonna Come” which served as an anthem of the Civil Rights Movement in the 1960’s and was previously quoted by Obama in his famous and historic 2008 victory speech in Grant Park in Chicago: “It’s been a long time coming.” The deal took many observers, including journalists following the talks in Lausanne, by surprise. After repeated extensions of the March 31 deadline and leaks about producing only a sort of general and nonbinding proclamation, the “parameters” were more detailed and extensive than expected and seemed to justify more efforts to achieve a detailed accord. Critics are likely to point to gaps and holes and concessions in the agreement, as they should, but initial reactions seemed to indicate that the Administration’s achievements could not be dismissed and might suffice to persuade Congress to hold off final judgement until the June 30 deadline.

Obama probably has no illusions about persuading Republicans in Congress to support him: his immediate targets are “hawkish” Democrats who will make or break a veto-proof majority on any new Iran-related legislation. Cognizant, perhaps, of their anxiety with the harshness of his statements on Israel after the recent March 17 elections, Obama reaffirmed his “unshakeable commitment to Israel’s defense.” After hemming and hawing about a post-elections congratulations call to Netanyahu, Obama now volunteered to brief the Israeli prime minister, albeit after updating various other world leaders.

It’s still reasonable to believe that part of Obama’s stand-offish attitude towards Netanyahu was tactical and meant precisely for this minute: to push Netanyahu into a corner and to depict his expected objections to an Iran deal as one more element in his overall anti-Obama and pro-Republican stance. But after he talks to the president and issues his expected condemnation of the deal, Netanyahu would do well to do his own “reassessment” on the efficacy of his own strategy and tactics until now.

Some of the questions Netanyahu might ask himself: Did his anti-Obama intifada increase or decrease the chances of blocking the “dangerous deal” in Congress? Did it help or hinder his ability to influence the administration’s positions in the negotiations? Were his achievements worth the damage done to the U.S.-Israeli relations? Will continuing with the same attitude increase or decrease his leverage? Will he now devote the three months until June 30 to efforts to derail the talks or will he try to influence what seems to many people, especially after Lausanne, to be a done deal?

After the Purim/Haman analogies, many Israelis and Jews around the world will find it easy to couch what seems to be an Iranian-American rapprochement in apocalyptic redemption terms of the Passover Hagaddah: “In every generation they stand up against us to destroy us, but the Holy One, Blessed Be He, redeems us from their hands.” But it’s Netanyahu’s response that will mostly determine whether Israel reacts with cool rationality to the new challenges it faces, or descends into the hair-tearing gevalt-screaming hysterics which have characterized its response until now.

In any case, Netanyahu, who coined the term “Tehran-Lausanne-Yemen Axis” this week, could end it with the title of a 1939 column written by Israel’s venerated columnist-poet Natan Alterman. It was published in Haaretz on July 18, 1939 under the title “the London-Moscow-Paris Talks,” which was later changed to “Diplomatic Talks” and actually became a big hit for the late Israeli singer Arik Einstein. The lyrics became famous for their clever depiction of endlessly fruitless diplomatic talks that go on and on with no result or purpose – like some people view of the talks that ended in Lausanne yesterday.

But Netanyahu might find the historical context that Alterman wrote about much more useful for his rhetorical purposes: the tripartite Russian-British-French talks on the eve of the Second World War that were aimed at guaranteeing Poland’s safety against the aggression of Nazi Germany. Like Munich, 1938, we all know how that ended, Netanyahu might very well say.

After Iran Deal, Time for Bibi To ‘Reassess’ Quixotic Fight