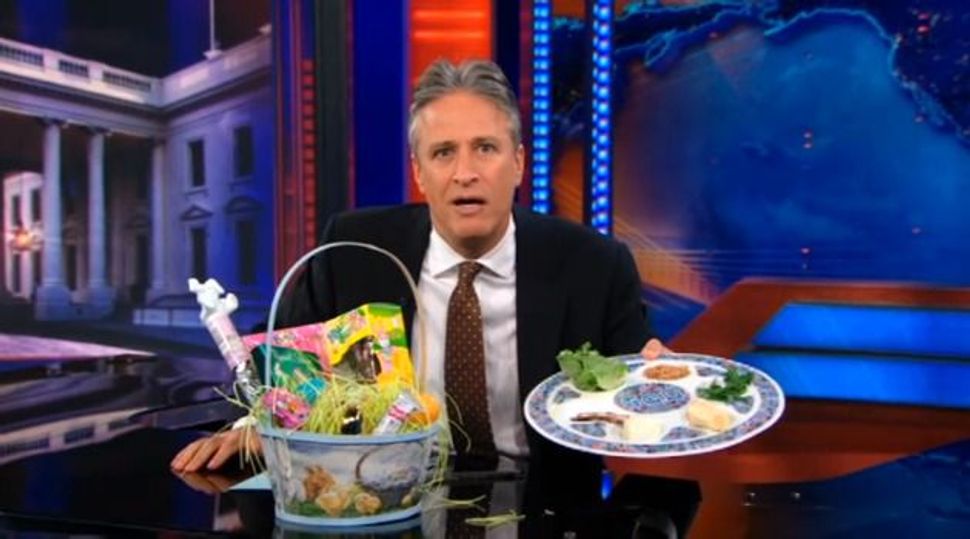 In a Daily Show clip I revisited this weekend, Jon Stewart says that “we Jews are getting our asses kicked” when it comes to holidays. We’ve already lost the Christmas v. Hanukkah competition for kids’ attention. Now Passover v. Easter comes along, and we don’t stand a chance!

After all, Jon says, what would you choose if you were faced with the choice between:

Yes, that’s right. You’d choose Easter. And who could blame you?

If you ask me, Jon is 100% right. We Jews are missing out big-time when it comes to these April shindigs. And if we don’t do something to fix it, well, let’s just say the results won’t be pretty.

Growing up in the Orthodox Jewish world, I experienced years and years of Passover Seders, but I never got a taste of Easter until I was in grad school. My friend’s parents were visiting campus and they decided to organize an Easter egg hunt for our entire cohort. Presented with the dazzling prospect of winning untold heaps of tiny chocolate spheres, I got a little…too excited. I ripped through the area with an “I’m not here to make friends, I’m here to win!” attitude, until at last my friend’s parents called the hunt to a halt and we all counted our winnings.

Of course, I’d scored double what everyone else had. My friend hinted that it was customary, after an Easter egg hunt, to redistribute the wealth so that everyone ended up with a roughly equal amount of chocolate. I pretended not to hear her. Beaming, I exclaimed: “Who’s the skinflint who thought up Passover? Easter is amazing!”

Everyone laughed. But I was dead serious. The closest I’d come to this kind of holiday hunt was the annual Passover search for the Afikoman — which, let’s face it, is more of a punishment than a prize. A dry shard of unleavened bread v. a chocolate-filled egg? It’s like Jon says: “No contest.”