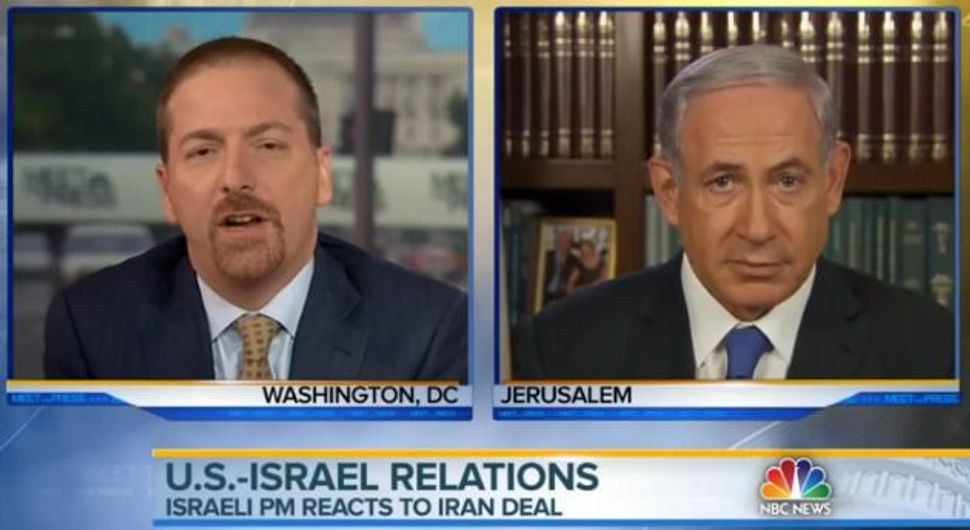 Benjamin Netanyahu’s round-robin tour of America’s Sunday interview shows — hitting NBC, ABC and CNN on a single morning — was a master stroke by Israel’s much-maligned public diplomacy operation. If any news consumer was still wondering on Saturday night where Israel’s elected government stands on the Iran nuclear framework agreement, that was cleared up by Sunday afternoon.

Left unanswered are several questions about the prime minister’s own intentions. In fact, his performance raises as many questions as it answers. Logically, he should be reacting to the announcement of the Lausanne framework with a victory lap around the capitals of the six powers, claiming credit for raising the global alarm (not entirely deserved — it was already on the world agenda before he became prime minister, but he certainly played a key role) and for providing the military threat that helped push the Iranians to blink.

Thanks in good measure to his efforts, Iran has agreed to decommission two-thirds of its operating centrifuges, stop development of its next-generation centrifuges, get rid of all its medium-enriched 20% uranium and all but 300 kilograms of its low-enriched 3.5% uranium, convert its menacing nuclear installations at Fordow and Arak to alternate uses and allow highly intrusive inspection of all the above. There are major details still be worked out in the coming months, including how the inspections will work, where the excess uranium will go and what happens if they’re found cheating. But it’s still an impressive list of concessions, way beyond anything they’ve ever agreed to in the past and far more than anyone was expecting in the negotiations’ frantic closing days.

But a victory lap hasn’t been his chosen path. On the contrary, he’s calling the deal a historic mistake and a threat to Israel’s existence. It seems odd. And since this is the Passover season, a few blunt questions seem in order.

First Question: The prime minister bases much of his objection to the announced framework on the fact that the agreement doesn’t require Iran to recognize Israel and stop sponsoring terrorism. Those are worthy goals to work for, but they weren’t on the agenda at Lausanne.

The six powers entered a negotiation with Iran, based on the Geneva agreement in November 2013, with the sole aim of preventing Iran from attaining a nuclear weapon. The bomb was the danger that threatened the global order, as Netanyahu so memorably warned at the United Nations in 2012, when he risked his own dignity to brandish a Looney Tunes cartoon bomb before the eyes of the world. The bomb was and is the Iranian threat before which all the others pale. To raise those other issues now as weaknesses in the current agreement is to change the subject and move the goalposts.

Why does the prime minister feel he needs to focus his criticism of the Lausanne framework on its failure to solve a problem that wasn’t on the agenda? Does he feel that the problems that actually were on the agenda have been too adequately addressed to merit a full-scale attack? Why is he risking his credibility to launch an attack on the process based on a problem that the process wasn’t meant to solve?

Second Question: The prime minister argues that the alternative to the current deal is a better deal. Rather than engaging Iran in a negotiating process, which has necessarily involved concessions on both sides at every stage, he favors stiffer sanctions in order to pressure Iran into far more extreme concessions.

Those with long historical memories — going back further than, say, six years — will recall that during the Bush administration’s no-engagement policy before 2009, sanctions were imposed by America, Europe and the United Nations, but much of the world ignored them, including Russia and China, and Iran was proceeding full-steam toward nuclear capability. Things didn’t start to change until 2009, when the Obama administration got directly engaged in negotiations. That convinced the Russians and the Chinese to take the process seriously, and the sanctions finally began to hurt. That, plus the military threats from Netanyahu post-2009, led to Iran agreeing in 2013 in Geneva for the first time to suspend enrichment and begin serious talks.

If these talks don’t succeed, the alternative isn’t a better deal — it’s Russia and China abandoning the sanctions and Iran going back to Plan A, resuming its race to bomb capability. That’s not some left-wing fantasy. It’s the assessment of Israel’s own intelligence agency, the Mossad. Back in January, when Netanyahu and his Washington allies were pushing for the so-called Kirk-Menendez bill to ratchet up sanctions, Mossad director Tamir Pardo warned a group of visiting American senators that passage of the bill would torpedo the negotiations and return the situation to the pre-2009 standoff.

Netanyahu knew Pardo’s view, which is shared by his immediate predecessors, Meir Dagan and Efraim Halevy. That’s why the prime minister tried to call off the senators’ Mossad briefing. Delegation leader Bob Corker, chairman of the Senate Foreign Relations Committee, threatened in turn to cut his visit short and return to Washington. The briefing went ahead on January 19 as scheduled. The next day Obama gave his State of the Union address, in which he threatened to veto the Kirk-Menendez bill. The day after that, House Speaker John Boehner invited Netanyahu to address Congress and lay out the case for new sanctions in place of the current negotiations.

Pardo, under pressure from Netanyahu, tried to walk back his warning a day later, leaving the impression that Netanyahu had the backing of his intelligence community. But in late March another member of Corker’s delegation, Lindsey Graham, confirmed the original version. Asked by the Washington Post whether Israeli intelligence had tried to feed the senators cooked reports to undermine Obama’s case for talks, Graham said he hadn’t learned “anything new” from Pardo “except that the Israelis thought that legislation calling for imposing new sanctions could hurt the negotiations.”

The question the prime minister hasn’t yet answered is why his assessments are so utterly at odds with his intelligence agencies.

Third Question: The Iranian talks are far from the only instance of Netanyahu crafting policies based on threat assessments and readings of the Middle East landscape that are utterly at odds with those of his intelligence agencies. Even on the essential question of how grave a threat Iran poses to Israel, Pardo has argued semi-publicly since 2011 that Iran is not an existential threat and that it’s a serious mistake for Israel to portray it that way. Pardo’s two immediate predecessors, former Mossad chiefs Meir Dagan and Efraim Halevy, say the same thing.

And there’s a near-unanimous consensus among Israel’s military and intelligence leadership that Israel should embrace the 2002 Saudi Peace Initiative, which offers Israel full recognition and an “end of the Arab-Israeli conflict” in return for Israeli agreement to Palestinian statehood on the 1967 borders (with land swaps) and a “just” and “agreed” solution to the refugee problem. Netanyahu dismisses that assessment, too.

What’s the relevance of the Arab peace initiative in the current debate? It’s this: A few months after the initiative was adopted unanimously by the 22-nation Arab League, it was put before the 57-nation Organization of Islamic Cooperation and approved 56-to-0, with one abstention: Iran. That is, when the Islamic nations took the historic step of offering to accept Israel under certain conditions (conditions that, again, Israel’s military-intelligence establishment finds plausible), Iran did not vote “no.”

Fourth Question: Does the prime minister actually thinks he has a real prospect of convincing a critical mass of nations to ratchet up the sanctions on Iran rather than walk away from the whole mess if the current negotiations fail? Based on his plea that the Iranian nuclear program represents a mortal threat to Israel? Is he under the impression that the nations of the world give a rat’s behind about Israel’s fears — given that they know Israel’s own vaunted intelligence agencies think the fears are overblown? Is that what he’s counting on? Really?