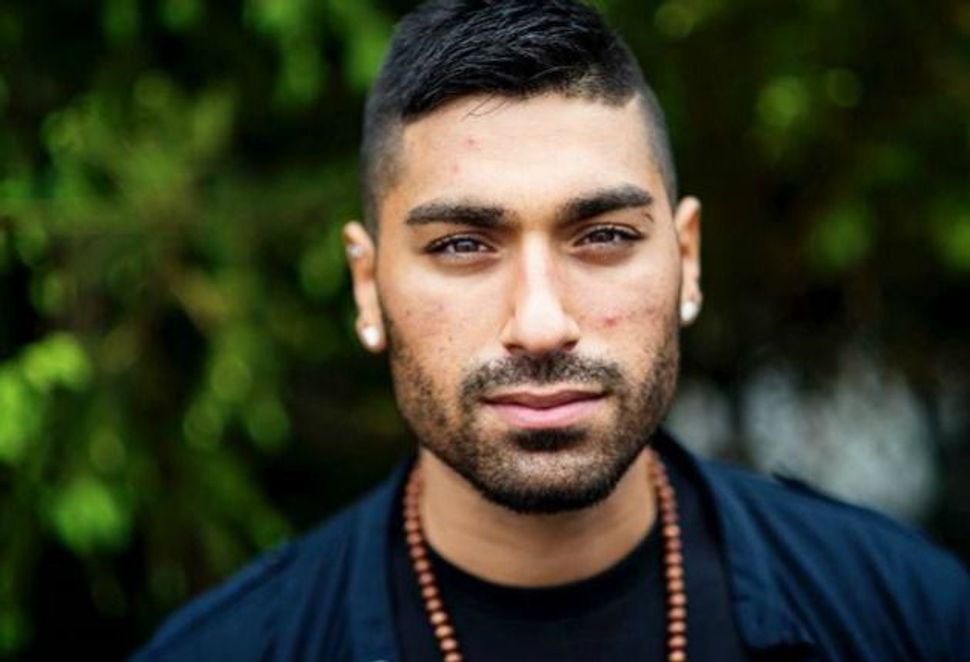 Siavosh Derakhti, a 23-year-old Swedish Muslim, seems an unlikely champion in the fight against anti-Semitism. But Derakhti, whose parents immigrated to Sweden from Iran, has been recognized for his work in combating hatred and bigotry.

In 2012, the Swedish Committee Against Anti-Semitism awarded Derakhti the Elsa Award for leading a vigorous campaign against anti-Semitism in Malmo, a city in southern Sweden where anti-Semitism is rampant.

Malmo, with a population of 294,000, is Sweden’s third largest city. Muslims make up 15% of this population — roughly 50,000 people — and greatly outnumber a shrinking Jewish population. By some estimates the total number of Jews in the area is more than 1,000. Malmo has been called one of the most segregated cities in Europe.

In 2013, Derakhti received the Raoul Wallenberg Award. The selection committee said Derakhti showed “through his actions and determination that one person can make a difference.”

President Obama hugged Derakhti and congratulated him for his work during the president’s 2013 visit to the Great Synagogue of Stockholm.

“When I think of Siavosh, I think of a man who is all heart and always defends the persecuted,” said Mathan Ravid, a member of the Swedish Committee Against Anti-Semitism.

The Forward’s Don Snyder spoke with Derakhti about how his upbringing fueled his drive to establish a relationship between Jews and Muslims in Malmo.

Donald Snyder: When did you first become aware of race hatred?

Siavosh Derakhti: When I was 7 years old. My two best friends were David, a Jew, and Juliano, a Roma. The Muslim kids in my grade school used to pick on David. They used to say “Sieg Heil” and “Dirty Jew” and “Jews to the gas.”

What was your reaction?

I was David’s bodyguard. I would tell them to shut up and stop talking to my friend that way.

What if they refused and continued taunting David?

Then we would fight, and we were pretty strong kids. A lot of them stayed away from us after they knew we wouldn’t accept their anti-Semitism.

Why are you waging this campaign against anti-Semitism?

Because I see Jews as my brothers and sisters, and I believe they should enjoy all the same freedoms as all Swedes… a freedom without hate. And all Swedes have to do something to bring about peace between Jews and Muslims, and if we want something done we have to do it ourselves. Jews must be able to live in this city as Jews, and I am trying to make this happen.

What are you doing to fight anti-Semitism?

I work with schools and community groups to bring young Jews and Muslims between the ages of 14 and 20 together to iron out their differences, and a lot of the Muslim anger toward Jews comes from Israel’s policies toward the Palestinians.

What do you think about Israel’s policies toward the Palestinians?

I don’t believe in talking about the Middle East here. We have to build bridges between Jews and Muslims here in Malmo. We can’t blame Jews here for what’s going on in the Middle East.

What approach seems to work best?

Occasionally I have taken Swedish kids from 14 to 20 to Auschwitz in Poland to see what state-sponsored anti-Semitism can lead to. Some of them cry, and some of them say they will never look at life the same way. My father thinks this is the best thing I can do. He remembers being persecuted in Iran because he was a member of the Turkish-Azerbaijani minority. [Note: Derakhti’s father first took him to Bergen-Belsen when he was 13 and to Auschwitz when he was 15.]

What are the special challenges you face in Malmo?

Malmo is a very segregated city, and there is little interaction between Muslim and Jewish kids. When they get together for the first time, they want to fight. Many of the Muslims are jobless because they don’t speak Swedish, which heightens tensions.

Are your fellow Muslims unhappy with your activities?

I get a lot of threats.

Give me an example.

Here’s a message I got recently: “Anybody who helps or even protects the enemy Jew is a traitor. This is not a biased opinion, but an objective matter of fact. On the matter of enemies and traitors we must be clear where we stand. The punishment is DEATH.”