How To Include LGBT Jews in ‘Who Sets the Table?’ 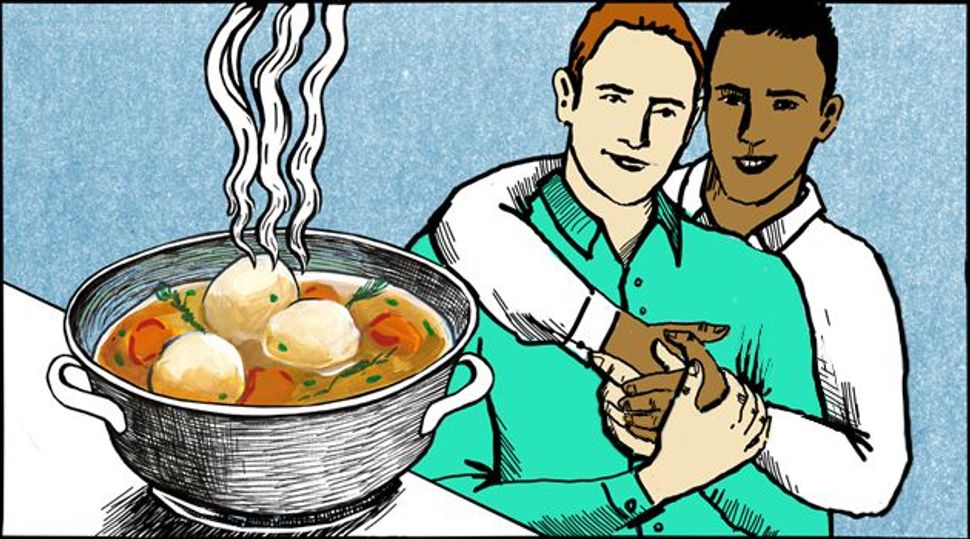 The Forward recently released the first survey in the “Who Sets The Table?” series, a new, year-long multimedia project that will try to discover “to what degree domestic observance of Judaism still relies on the efforts of women,” as well as the general ways in which the patriarchal structure of religious Judaism influences us today. The project as a whole is highly commendable, but its first installment, “Who’s Making The Matzo Balls?” (results here), which used Passover as its launchpad, excluded non-traditional families — most pointedly LGBT families — with this disclaimer:

We are aware that the scope of this project excludes same-sex, single-parent and other non-traditional families. This was not out of an intent to leave anyone out, but rather that the objective here is to discover how domestic work breaks down among heterosexual partnerships — those direct inheritors of the patriarchy. We invite those in non-traditional families to share their stories in the comments section below and will consider them for publication alongside the results.

Despite the invitation, this logic is inherently flawed for several reasons. It ignores the possibility that same-sex families (and single-parent families, but that’s a topic for another deserving op-ed) are also “direct inheritors of the patriarchy.” It connotes that only heterosexual nuclear families count (enough to be measured in the actual survey) toward the progression of contemporary American Jewry. It suggests that acknowledging the exclusion of a group makes it perfectly okay to go ahead and exclude away. But it’s not okay — it only makes that exclusion even more glaring.

With a basic makeover of the survey, the Forward can take a step toward LGBT inclusion and make its project a complete picture of how Jewish families operate today.

Let’s take a look at how the survey is structured. For every question asking who does a holiday household chore, there are two possible answers: “mostly man” or “mostly woman.” Many heterosexual respondents voiced an issue with this; commenter Jonathan Brumberg-Kraus put it best: “it doesn’t allow for the possibility that the male and female [partners in a family] might divide these tasks more or less equally, or at least perceive that they do.”

Essentially, the survey operates under a binary assumption that tasks are gendered and can only be designated toward “male” or “female,” negating the idea that both partners in a relationship split one or more tasks equally. The failure to include a third option — for instance, “split equally” — creates a general bias in the survey’s results. If you’re looking for a gender-biased outcome in regards to holiday-centric household tasks, giving only two gendered answer options is a good way to do it.

For future surveys, a better approach would be to offer a more complex demographic breakdown, creating options for what gender the survey participant and partner each identify with, as well as what sexual orientation, and creating the options “I mostly do this chore,” “my partner mostly does this chore,” or “my partner and I split this chore equally.”

As I mentioned, the survey also presumes that LGBT families are not “direct inheritors of the patriarchy.” Although the butch/femme dynamic, or basic dominant/submissive factor, is a bit more multi-varied in LGBT relationships than it was decades ago — when those very same relationships, more hidden from the general public than not, tended to rely on heteronormative and gender-normative partnership structures for basic guidance — they still exist.

If you want proof that misogyny persists within queer culture, you can read The New Republic’s Eric Sasson on how “gay men are still mocked for their tendencies to be histrionic, demonstrative, and emotional — i.e. ‘feminine’ and ‘weak’” or Autostraddle’s Kate on how “the patriarchy barters and trades with women as currency, and in those moments, [butches in the lesbian community] are doing the same thing.”

If patriarchy and misogyny as a whole have an undeniable influence on the LGBT community, wouldn’t the sole-same inherent patriarchy of Judaism from a mere few generations ago have the same effect?

As a queer observant Jewish writer, I’d like to share with you a Passover experience I once had. In my last long-term relationship, my then-girlfriend and I decided to host a Seder at our apartment. (Although she wasn’t Jewish, she had attended many Seders with me and was more than familiar with the holiday.) Because my mother had taught me all of our secret family recipes for matzo ball soup, brisket and more, I cooked the meal; because my girlfriend knew I needed help with cleaning the apartment before the guests arrived, she commanded that particular ship. We both set the table, we both read aloud from the Maxwell Haggadah in English, and when I lead “Adir Hu,” she beatboxed the rhythm to the delight of the table.

Give me a survey with a more inclusive format that reflects that, and I’ll answer with this: “Next year in Jerusalem.”

How To Include LGBT Jews in ‘Who Sets the Table?’