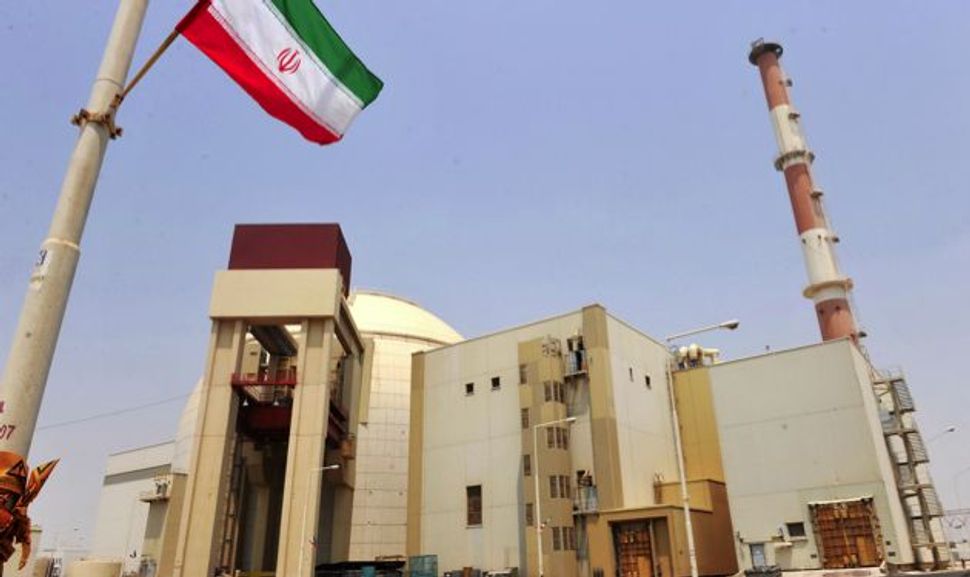 Nuclear Reaction: One of the plants in Iran’s nuclear infrastructure. Image by Getty Images

The senior politicians of the State of Israel really need to calm down and stop behaving as if the world is about to end. It is not.

The new draft framework agreement between Iran and the P5+1 needs improvement and clarifications. It is not perfect.

It’s understandable for our politicians to be concerned about parts of this deal. After all, the Iranian regime has been saying “Death to Israel” since 1979 and has sponsored numerous terrorist attacks in which hundreds of Israeli citizens have been killed.

But to call this draft agreement “a historic mistake” and “a threat to Israel’s survival,” as our current defense minister and prime minister have done, respectively, is very inaccurate.

First and foremost, this is only a draft agreement and not a binding deal, yet. We will have to wait until June 30 to see if the two sides can reach a deal.

Furthermore, the draft agreement contains a number of important clauses that could in fact contribute to the security of the State of Israel as they would push Iran’s capability to make a nuclear bomb further away.

There are two ways for Iran to make a nuclear weapon. One is through the enrichment path using centrifuges; the other is the plutonium path, through the heavy water reactor in the city of Arak.

According to the draft nuclear agreement, Iran would cut its number of centrifuges by 66%, to 5,060 working centrifuges for about 10 years.

All operating centrifuges will be of the first-generation type, which are slower and far less advanced. These centrifuges would produce low-enriched uranium. The draft agreement then goes on to state that an overwhelming majority of the manufactured LEU would be converted or shipped out of Iran. About 99% of it, to be exact.Out of its stock of 10,000 kilograms of LEU, Iran would keep 300 kilograms on its soil for 15 years. This is not enough to make a nuclear bomb.

Meanwhile, the Fordo enrichment site would cease to enrich uranium and instead would enrich other chemicals to produce medical isotopes.

To make it more difficult for the Iranian regime to secretly make a weapon through the enrichment path, [according to the draft agreement fact sheet][4], “Iran will be required to grant access to the IAEA [International Atomic Energy Agency] to investigate suspicious sites or allegations of a covert enrichment facility, conversion facility, centrifuge production facility, or yellowcake production facility anywhere in the country.”

There will be other additional inspections, not just at where enrichment takes place, but at any site in the whole life cycle from uranium extraction to centrifuge assembly.

So what about the plutonium track? Enough plutonium could theoretically be extracted from the current heavy water reactor at Arak. However, the current deal, if signed, would put an end to that. According to the draft agreement, the core of the current reactor would be removed in order to be destroyed or transferred to another country. In its place another core reactor would be designed and installed in conjunction with the P5+1. The amount of plutonium that could be extracted from the heavy water of the new reactor core would in no way be sufficient to make a weapon.

While noting that parts of the draft agreement could make very important contributions to Israel’s security — if, that is, the draft turns into an agreement, — nevertheless, no one should be under the impression that this is a perfect document. No. There are important areas where it needs to improve.

According to Emily Landau, an arms control expert at the Israel Institute for National Security Studies, “There is a lot of ambiguity in the released fact sheet by the U.S. State Department about what has and what has not been agreed,” Landau stated. She then pointed specifically to whether Iran would answer questions regarding the possible military dimensions of its nuclear activities in the past.

“The released fact sheet by the State Department says they this issue will be addressed by the IAEA. How? When? Which sanctions will remain in place if Iran does not answer them?” she asked. And she is right — Iran has been stringing the IAEA along for many years regarding this issue and refusing to cooperate.

Even President Obama admits that the draft agreement is imperfect. In his recent interviewwith NPR, he said, “What is a more relevant fear would be that in Year 13, 14, 15, they have advanced centrifuges that enrich uranium fairly rapidly, and at that point, the breakout times would have shrunk almost down to zero.” Although his point was also that after 13 years of inspecting Iran’s nuclear program, the West will have a much better understanding of it through tough inspections, thus allaying the fears of an imminent bomb. Also, it’s unlikely that after going through at least 13 years of an agreement to save its economy from sanctions, Iran would want to risk new tougher sanctions and possible war by deciding to build a nuclear weapon.

Another criticism of the current framework agreement is that it does not address Iran’s growing influence and support for terrorism in the region.

The Iranian Revolutionary Guards’ presence on our borders with Syria and Lebanon is a serious threat. But the idea that sanctions could be used to force Iran to reduce its help for Hezbollah and Bashar al-Assad while getting it to agree to significant verifiable cuts to its nuclear program is unrealistic.

Which foreign soldier who does not have a death wish would be willing to go to Baalbek in Lebanon to disarm Hezbollah fighters? And where will we find the inspectors to go back there again to inspect that Hezbollah has not rearmed, while checking Hezbollah bank accounts to make sure it is no longer receiving financial aid from Iran?

Although it’s reasonable to want this to happen, in reality it’s completely unrealistic. So is the current demand by the government of the State of Israel for Iran to recognize Israel as part of this deal. Asking the Iranian regime to recognize Israel is like asking ISIS to stop killing people. It’s never going to happen.

For now, work still needs to be done on the draft nuclear deal to make it a better deal. We need more focus and constructive criticism, and less hysteria.

Meir Javedanfar is an Iranian-Israeli Middle East analyst. He teaches contemporary Iranian politics at IDC Herzliya and is a researcher at the Ezri Center for Iran and Persian Gulf studies at the University of Haifa.