What Hillary Clinton Needs To Tell the Jews 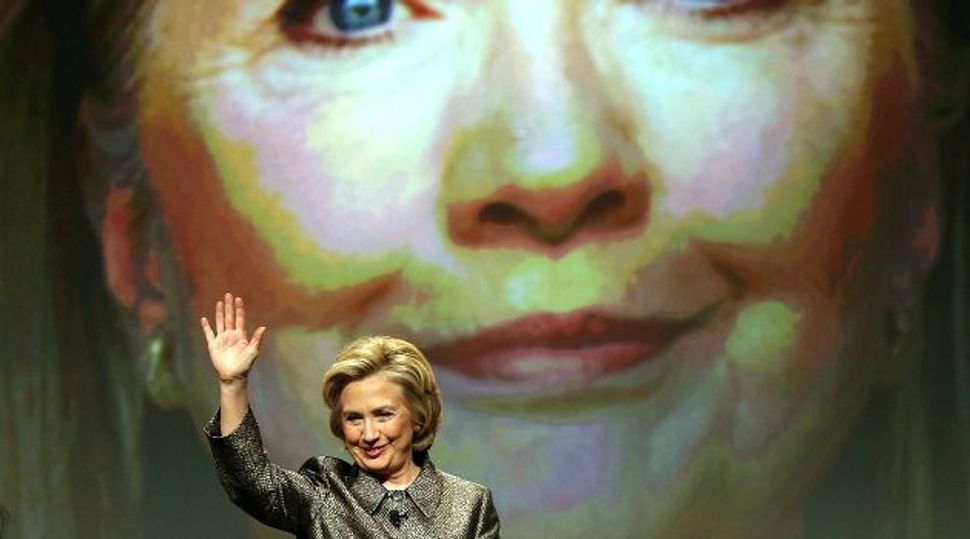 Now that Hillary Clinton’s presidential bid is official, American voters will want to get a whole lot clearer on her policies. For the Jewish community, some of the major questions will revolve, inevitably, around Israel and Iran. And we shouldn’t be surprised if, on these topics, we hear her sounding a more hawkish note than the one Obama’s been hitting for months.

Over at The Nation, editors and contributors seized on the issue of U.S.-Israel relations by calling our attention back to a speech Clinton made to the American Jewish Committee in May 2014. As the Forward reported, that speech “was meant to send a signal to the pro-Israel community, insiders say, that a Clinton presidency would smooth over tensions ruffled by the Obama White House.”

Chief among those tensions? Iran, of course. Here’s Clinton: “I personally am skeptical that the Iranians will follow through and deliver… We will have to be tough, clear-eyed and ready to walk away and increase the pressure if need be… From my perspective, we cannot and should not accept any agreement that endangers Israel or our own national security.”

Note that Clinton delivered these words — to the Jewish crowd’s delight — a month before her foreign policy autobiography, “Hard Choices,” hit bookstores. And that book was widely viewed as the unofficial start to her campaign for the 2016 election. Clinton, in other words, was already priming the pump with an eye toward getting elected.

Clinton, of course, has got her eye not just on Jewish votes, but on Jewish dollars. Many of the biggest Jewish names in Hollywood look poised to open their wallets wide for her (much wider than they did during her first 2008 run) but if she wants to keep the cash flowing in, she’s going to have to reassure certain donors about certain things.

And — right on cue! — today’s headlines inform us that the Democrats are stepping up the Iran pitch to Jewish “influencers” now that Clinton’s announced her presidential bid:

President Barack Obama will attend two White House meetings with Jewish leaders on Monday — one with organizational leaders, and a second unusual meeting with a group described by sources close to the White House as “influencers.”

Translated, “influencers” means major Jewish donors to the Democratic party, said the sources, who had been briefed by the White House on the meetings. Donors are a key constituency now that Hillary Rodham Clinton, Obama’s heir apparent, has formally launched her now presidential bid and will be seeking to tap these same donors for funds.

The White House is especially sensitive to skepticism about the Iran deal within that donor constituency, the sources said. Among those attending the meeting are Haim Saban, the Israeli American entertainment mogul who has been a major donor to Democrats but who also has in the past criticized Obama’s Israel policies.

It’s all a bit awkward, really. To promote his Democratic heir apparent, Obama has to make an extra effort to convince the pro-Israel crowd that his party has their best interests at heart, and hence that their dollars will not go amiss if they land in Clinton coffers. As for Clinton, she has to sound a sufficiently hawkish pro-Israel note without seeming to undermine Obama’s approach too much. Even as the two are tied together, Clinton needs to boost herself by differentiating herself from him — a task requiring immense political finesse.

She’s up to it, though. Remember how, in 2008, when Obama was peeling away the black vote she’d worked hard to win, Clinton shifted gears to focus instead on white voters, and managed to throw just enough shade at Obama to do damage to him without making it seem like she was actually throwing shade at all? Well, Collier Meyerson over at Fusion remembers — you can read her refresher here.

Bottom line, the Jewish community can expect a silly season filled with strikingly pro-Israel comments from Clinton — especially early on, as the big money’s being raised. While this is happening, and while the “influencers” are being wooed into influencing, Jewish progressives will be paying close attention to what Clinton says. They will press her on the differences between her policy and Obama’s vis-à-vis Israel, Iran, and hopefully a whole host of urgent domestic policy issues. They may not always like what they hear. But, if they’ve been reading the tea leaves over the past year, they won’t be surprised, either.

What Hillary Clinton Needs To Tell the Jews