Is ‘Strangeness’ of Ed Miliband an Anti-Semitic Code Word? 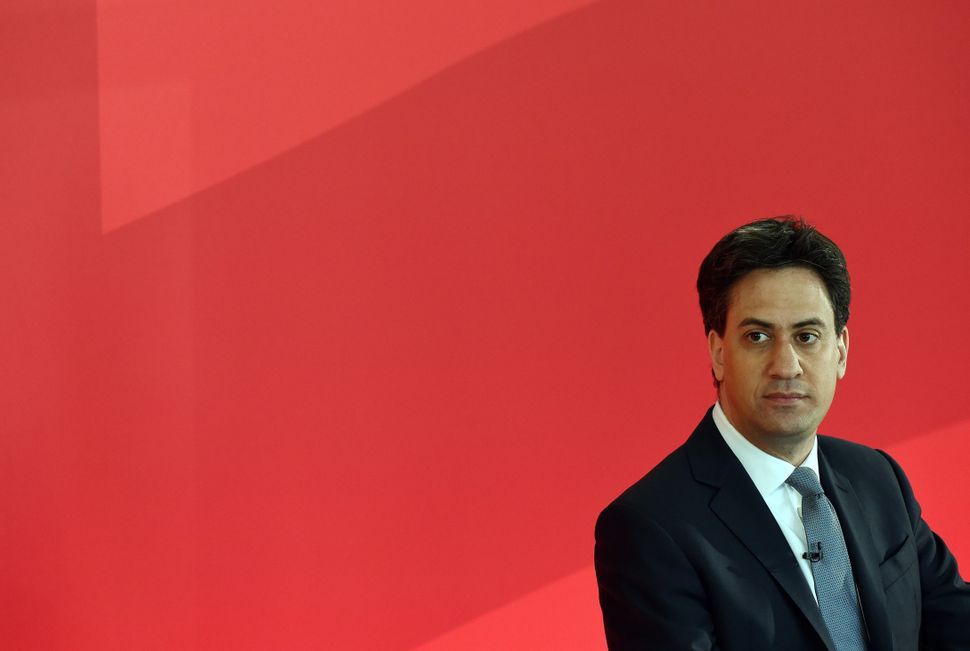 When Ed Miliband’s team concluded last year that he had an image problem, they decided the easiest way to give him the common touch was to have him eat a bacon sandwich. After all, what cheaper way to show that the Labour candidate for British prime minister has empathy with the everyman than eating the staple breakfast of the working class? Sadly for Ed, his failure to eat the meaty, greasy butty while looking like a normal human being has been subject to ridicule ever since.

The bacon sandwich affair, however, wasn’t only about combating a class problem. A trip to a fish-and-chip shop with his family would’ve done the job had it been only a matter of social standing. Rather, the choice of bacon was deliberate, and the subsequent media obsession over the sandwich very telling. Eating a bacon sandwich was about proving his Englishness and dissipating the cloud of otherness that continues to shroud his campaign.

Miliband hasn’t been shy about his otherness in the past. “… I hope that I’ll be the first Jewish prime minister…,” he said last year, describing himself as a “Jewish atheist.” “I’m Jewish by birth origin, and it’s part of who I am.” Miliband has spent years courting Jewish communal institutions, even traveling to Israel in April 2014. “For me, Israel is the homeland for the Jewish people,” he told students at The Hebrew University of Jerusalem.

Nor would any political opponent ever go so far as to be explicit about Miliband’s Jewishness. That would be rather gauche and continental, and go against the grain of the sort of anti-Semitism that has historically pervaded the English political and cultural elite. English anti-Semitism, Harold Abrahams says in “Chariots of Fire,” is something you catch on the edge of a remark —“scoffs and scorns, predicated on a sense of difference,” as Anthony Julius wrote in “Trials of the Diaspora.”

Anti-Semitism on the edge of a remark takes various forms. Christopher Hitchens always used to cite the sort of haughty dinner party comments that might be directed toward Jews as an example, something sarcastic about Abrahams or Jacobson being a “fine old English name.” Similarly, no one would ever use the American vulgarism to “Jew someone,” or to “Jew up” or “Jew down,” with reference to private transactions, but a businessman might very well be called a Fagin or a Shylock if he is seen to be driving a hard bargain.

Miliband will never be confronted with or for his Jewishness, then, but, consciously or unconsciously, code words are used to accentuate his otherness. “People see you as a north London geek,” Jeremy Paxman put it to Miliband in a recent interview, drawing on a general perception of him. Miliband is a “North London Marxist intellectual’s son,” the Conservative Member of Parliament Nadine Dorries wrote in the Daily Mail. Even David Cameron called Miliband a “Hampstead socialist” recently, which is especially disappointing from a leader who has taken the issue of Jewish safety and security more seriously than any of his predecessors.

As I say, it might be the case that these politicians don’t quite know what they’re doing, but the constant reference to geography is very telling. To denote Miliband as being from north London is not unlike labeling someone an east coast or Upper West Side intellectual in the United States. Hampstead is, as Michael Idov once characterized it, “the citadel of the moneyed liberal intelligentsia.” That part of north London is home to an alternative, left-wing and socially liberal ideology or way of life, such that if the Guardian were to design a London borough, it might look something like Hampstead.

But, as Idov also says, Hampstead was and is an “environment of cosmopolitan cool” where otherness is the norm. The neighborhood became popular with Jewish scholars and intellectuals toward the end of the 19th century, while the period between World War I and II saw it become home to many Jewish refugees from Europe, to writers and artists, and to people like Sigmund Freud. When Miliband is pilloried as a “north London Marxist intellectual,” the accuser is not only making a political statement – it is a slur disguised as a slight, a way of highlighting difference without having to be so crude as to use the J word.

There are some who can’t leave Miliband’s otherness alone. The Daily Mail — Britain’s premier source of Miliband hatred for those who like their politics with a whiff of fascism about it – previously published “The Man Who Hated Britain.” It protrayed Miliband’s father. Ralph Miliband, a Jewish refugee of the Holocaust, as an ungrateful arriviste and a rootless cosmopolitan. Reading the Mail, one would get the impression that Ralph Milliband was a disloyal and discontented outsider with radical politics, operating as a fifth columnist seeking to upend his adoptive country from the inside, and not the well respected academic Marxist that he was.

Ed Miliband knows his otherness is a liability. In the wake of the bacon sandwich affair, he has attempted to turn his inability to eat a piece of meat between two slices of bread into an electoral asset. “I am not from central casting. You can find people who are more square-jawed, more chiseled,” he said. “You could probably even find people who look better eating a bacon sandwich.” Deploying this line as often as possible since the affair, including in recent debates, his strategy evidently is to mention bacon enough times for people will forget that he’s a “north London intellectual.”

One mustn’t exaggerate the problem; British society is largely free of the anti-Semitic virus. But the way the right wing in particular talks about Ed Miliband does come back to an old British malady: our problem with otherness. We have a problem with living next door to immigrants, or sitting on a train and hearing people speak a language other than English. We have a problem with foreign nationals who receive treatment for free from the National Health Service. And, we have a problem with the idea of a prime minister who doesn’t know how to eat his bacon sandwiches.

Is ‘Strangeness’ of Ed Miliband an Anti-Semitic Code Word?