Why Israel’s Alliance With Azerbaijan Is So Shortsighted 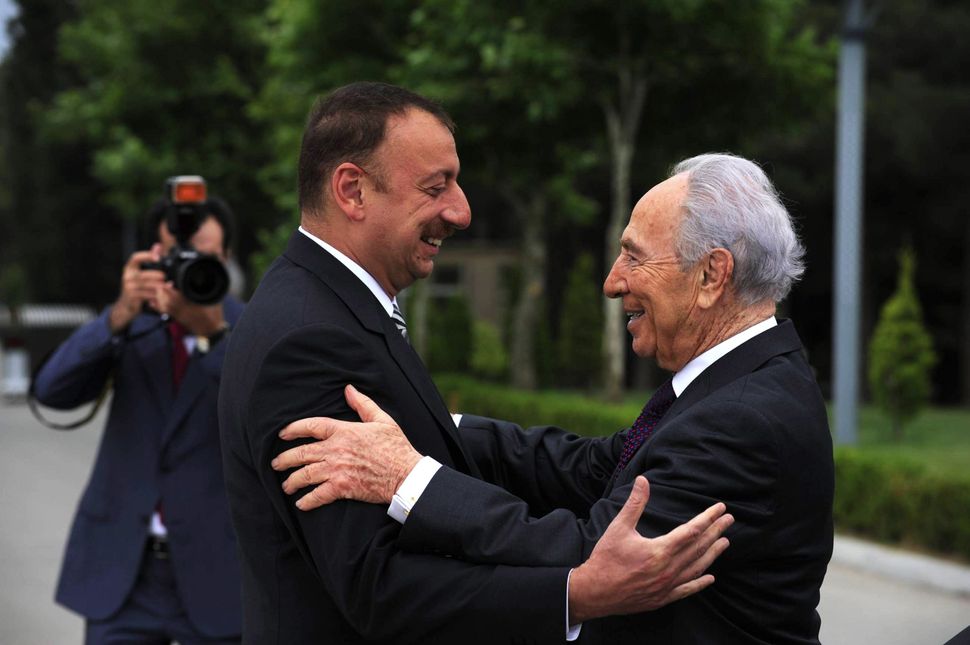 Israel's then president, Shimon Peres (right), embraces the president of Azerbaijan, Ilham Aliyev, on a visit in 2009. Image by Getty Images

Israel’s president, Reuven Rivlin, took two steps forward when he met with Israeli Armenian leaders on April 24 but one step back when he failed to characterize the 1915 massacre of 1.5 million Armenians at the hands of the Ottoman Turks for what it was — genocide. As many Jewish scholars have pointed out, this sets a dangerous precedent as it trivializes the Armenians’ deaths, encourages denial and emboldens future dictators to commit genocide once again.

Living in a country that is home to so many grandchildren of Holocaust survivors, Israelis should be ashamed of their president’s lack of boldness on this issue. It is time for Israel to recognize the Armenian Genocide and press Turkey to apologize and consider the issue of reparations in a serious and fair way. A recent editorial in The Jerusalem Post noted: “Founded in the shadow of the Holocaust, the State of Israel is a living testament to the failure of the international community to prevent genocide… Israel has an obligation to live up to that legacy by using its political sovereignty to prevent genocide not just against Jews but against any group…. Pope Francis has publicly recognized the Armenian Genocide. Now it is Israel’s turn.”

But there’s another problem. In addition to failing to recognize the past crimes committed against the Armenians, Israel has formed a strange alliance with Armenia’s enemy Azerbaijan, selling billions of dollars in arms to an authoritarian regime that is fueling regional conflict. This is the same country that attempted to wipe out the entire Armenian population of Nagorno Karabakh in 1991 before losing a bloody war against the Armenians.

In 2012 alone, Israel sold Azerbaijan $1.6 billion in weaponry that included advanced drones and anti-missile launchers. As the Israeli Holocaust scholar Yair Auron has recently characterized it in Haaretz, “The sale of weapons to a government committing genocide is like the sale of weapons to Nazi Germany during World War II.” Azerbaijan’s long time president, Ilham Aliyev, has on numerous occasions sworn to “wipe Armenia off the face of the earth.” Sound familiar?

It’s worth noting here also that the Azerbaijanis are close allies with Turkey, a country that has committed numerous acts of violence and murder against its Jewish populations going back to the killing and expulsion of 50,000 Jews earlier this century in the Rumeli region, and deporting the wealthiest Jews and Christians in Turkey to labor camps during the infamous wealth tax episodes in the 1950s. As far back as the early 1900s, Azerbaijan’s minister of the interior, Behbud Khan Javanshir, an ally of the Young Turks, was part of the leadership responsible for carrying out the Armenian Genocide. Some historians believe that after killing the Armenians, the Young Turks planned to annihilate the Lebanese and the Jews in Palestine, but after World War I the allies stopped them. In the past several years alone, Hezbollah has opened offices in Turkey. Also several public anti-Semitic rallies have been held in Azerbaijan. As the rise of open anti-Semitism in Turkey and Azerbaijan continues, it should be clear that these countries are no friend of Israel or of the Jews.

The arms that Israel provides Azerbaijan will only help to increase a regional arms race that will benefit no one: Russia (which has also sold arms to Baku) will continue to counter Israeli sales and support Armenia. Does Israel really want to have another anti-Semitic state to the North with sophisticated weaponry? And fomenting trouble on the Iranian border of Azerbaijan — which seems to be the main reason for Israeli arms sales to that country — is simply goading a very large regional power into war rather than seeking peace.

Jews and Armenians are kindred spirits and, throughout their respective diasporas, the best of friends. For 70 years during the Soviet era, Armenia was a haven for Soviet Jews fleeing Russian anti-Semitism. It remains so today, with two active synagogues. Armenia’s first president, the Syrian-born Levon Ter-Petrossian, was proud to have a Jewish wife. Two Armenian world chess champions, Garry Kasparov and Levon Aronian, are half Jewish. And all you have to do is look at Armenian names such as Movses Israelian and Isaac Kaplanian to realize that the two people are intimately linked. Moreover, Armenians biblically consider themselves to be the sons of Noah and the grandsons of Japheth. How much more Jewish can you get? Finally, in Israel itself 3,000 Armenians live mainly in Jerusalem’s Armenian Quarter and in Tel Aviv. Here as elsewhere, although they are the tiniest of minorities, demographically they have contributed to Israel’s success, providing leading businesspeople and artists. Jerusalem’s Armenian pottery, for example, is famous the world over.

So the takeaway for Israel and its leaders should be simple: Help Armenia, do not harm it. Begin to show the moral courage that you expect the rest of the world to show your own great country. Stop selling arms to Azerbaijan. Recognize the Armenian Genocide, and help this struggling country to grow and thrive. It may not seem so to some myopic politicians and right-wingers, but in the end such an alliance can only benefit both nations.

Christopher Atamian is a writer whose work has appeared in the Huffington Post. His paternal grandparents are Armenian Genocide survivors.

Why Israel’s Alliance With Azerbaijan Is So Shortsighted