A Split in Hamas That Might Bring Calm, But No Peace 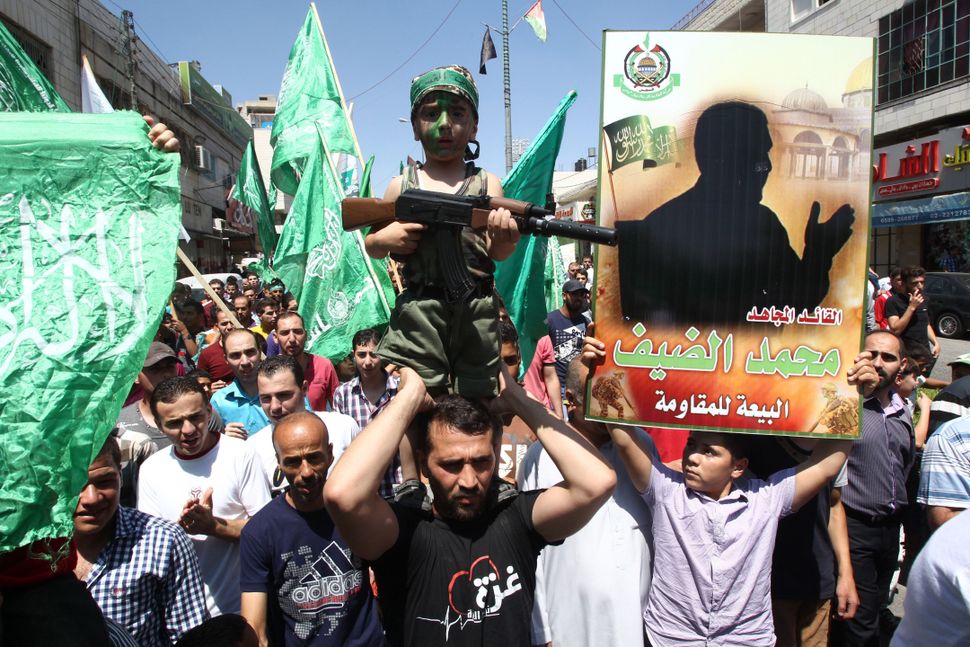 Hamas supporters at a rally last summer hold up a picture of Mohammed Deif, the group's military chief. Image by Getty Images

While Benjamin Netanyahu’s defense philosophy continues to prompt grumbling among his generals and spymasters, it turns out that the Israeli prime minister isn’t the only political leader in the neighborhood who’s at odds with his military echelon.

New intelligence reports indicate that the military and political wings of Hamas are feuding over relations with Iran and continuation of the cease-fire with Israel. The military wing in Gaza has reportedly begun receiving massive financial aid from Iran to restock its missiles and dig new attack tunnels, despite opposition from the political wing. The political wing, meanwhile, has been conducting indirect talks with Israel over reconstruction of Gaza’s civilian infrastructure and a possible multi-year truce.

The Israeli-Hamas dialogue is said to be infuriating the Palestinian Authority leadership in the West Bank, which sees Israel helping to entrench Hamas in Gaza as a rival Palestinian leadership. That, in turn, angers Washington and Cairo, which want to see Mahmoud Abbas’s P.A. regain control in Gaza at some point in order to become a credible partner in a two-state peace agreement. Weekly talks in Gaza between the P.A. and Hamas appear to be going nowhere.

The new Gaza channel is reinforcing U.S. suspicions that Israel is backing away from the goal of a two-state solution. Undersecretary of State Wendy Sherman, addressing the biennial conference of the Religious Action Center of Reform Judaism on April 27, pointedly warned that if Netanyahu’s new right-wing coalition “is seen as stepping back” from the two-state goal, America’s “job” defending Israel “in the international community” will be “a lot tougher.” That’s a thinly veiled reference to the upcoming French proposal that the United Nations Security Council call for Palestinian statehood along modified pre-1967 lines. Washington hasn’t yet decided whether to veto such a resolution, whose content would reflect longstanding U.S. policy.

Accounts of the feuding between the two wings of Hamas appeared April 29 in nearly identical reports in an array of Israeli news outlets, all without attribution, typically an indication of a background press briefing from IDF military intelligence.

The reports all led with the news that the commander of the military wing, Mohammed Deif, who had been reported killed by Israel during last summer’s Gaza war, is now confirmed to be alive and fully in command of the terror group. They went on to describe Deif’s overseeing of the new tunnel excavations.

Tensions between Hamas’s political and military wings were described in most of the reports, including the centrist Walla News and Ynet, the leftist Haaretz, the right-wing NRG and the Orthodox Kikar Shabbat.

The pro-Likud Israel Hayom and a few smaller outlets ignored the factional feud, simply reporting that Deif is rebuilding Hamas’s military infrastructure. Israel Hayom also made no mention of Hamas’s offer of a long-term truce.

Iran ended its financial backing of Hamas in December 2012 because of Hamas’s support for the Sunni rebels fighting the Assad regime in Syria. Hamas political secretary Khaled Meshaal was expelled from Damascus and set up new headquarters in the Persian Gulf emirate of Qatar, where he continues to be based.

Meshaal further angered Iran earlier this year by announcing support for the Saudi-led coalition fighting the Iran-backed Shi’a Houthi rebels in Yemen. Meshaal’s goal is an alliance with Egypt and Saudi Arabia, according to the Israeli intelligence reports. The Saudis have told Hamas in the past that it can’t gain legitimacy unless it recognizes Israel.

Iran set up a competing terror organization in Gaza last year, based in the tiny Shi’a community in northern Gaza, according to an account in Ynet by Arab affairs researcher Yaron Friedman. The new organization, known in Arabic as Harakat as-Sabareen Nasran le-Filastin, or the Movement of those Patiently Awaiting the Liberation of Palestine, is apparently modeled after the Lebanese Hezbollah organization. It’s pressuring Hamas to end the August cease-fire and resume rocket attacks on Israel. Its relationship to Deif’s Iran-backed military wing is unclear.

A separate account by Yediot Ahronot military commentator Alex Fishman, which appeared on Ynet’s English-language site several days before the unsourced reports on Deif and the factional feud, reported that Israel has been conducting detailed negotiations with Hamas for weeks via mediators from Egypt and Qatar as well as the Swiss attaché in Ramallah.

That was confirmed the next day by Ahmed Yousef, a senior leader of the Hamas political wing in Gaza, in an interview with the independent Palestinian news agency Ma’an.

Fishman wrote that Hamas sent Israel a detailed offer in December for a five- to 10-year “calm.” The Israeli government didn’t formally respond, but the Israeli military has taken up the thread, apparently with the permission of the civilian authorities though without a cabinet vote.

The government has kept a hands-off approach to the talks, Fishman wrote, in order to avoid damaging its right-wing image during the election campaign and coalition negotiations, as well as to avoid undermining its international efforts to portray Hamas as a terrorist organization.

The motives of Israel’s political and military echelons appear to be somewhat at cross-purposes, though hardly matching the venom of the feuding Hamas leaders. The army sees the dialogue with Hamas as a way to prevent the outbreak of new hostilities, which appeared to be inevitable if no progress were made by summer to ease the humanitarian situation in Gaza. Moreover, there were intelligence reports that Hamas was preparing to expand its zone of confrontation with Israel from Gaza to the northern borders, where Palestinian refugee camps in Lebanon and Syria are seething in the wake of the brutal ISIS assaults on the Yarmouk camp south of Damascus.

Israel’s army doesn’t have the authority to negotiate without the government’s approval for the sort of long-term agreement that Hamas reportedly seeks, but it can increase the flow of goods into Gaza to calm the waters. Since the start of 2015, according to Fishman, the number of trucks carrying material into Gaza has doubled from the 255 daily average last year to 523 per day in April. The number of entry permits into Israel has also increased, half of them for merchants seeking to market goods in Israel and the West Bank, the other half mostly civil and humanitarian.

The military would like to see the government think a little bigger. With Syria in flames, which have also engulfed Hezbollah, and Iran at war with both ISIS and the Saudis, Israel’s generals grumble that this would be a great time for some bold, imaginative long-term thinking. But boldness and imagination are in short supply in Jerusalem this year.

A Split in Hamas That Might Bring Calm, But No Peace