As Coalition Deadline Nears, Bibi’s Choices Are All Bad 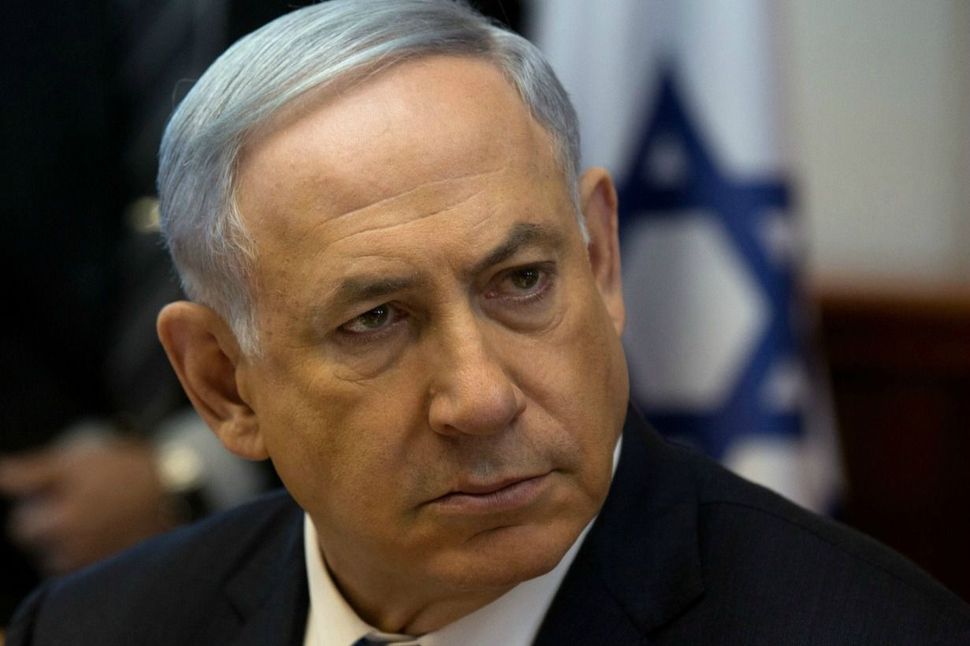 Benjamin Netanyahu has barely a day left to complete what looked like a slam-dunk a month ago and now seems almost impossible: assembling a governing coalition of parties that control a majority of the 120 seats in Israel’s parliament. If he doesn’t finish the job by midnight Wednesday (5:00 p.m. Eastern), Israel’s figurehead president Reuven Rivlin, no friend of Netanyahu’s, is required by law to choose someone else for the job.

As of Tuesday afternoon, Netanyahu had signed agreements with three small parties holding a combined 23 seats, the ultra-Orthodox Shas and United Torah Judaism parties and the centrist Likud breakaway Kulanu. Those sealed deals together with his own Likud’s 30 seats given the prime minister a total of 53. He had expected to close deals this week with two more parties holding 14 seats between them, for a comfortable total of 67: Ha-Bayit Ha-Yehudi (Jewish Home) of outgoing economics minister Naftali Bennett and Yisrael Beiteinu (Israel Is Our Home) of outgoing foreign minister Avigdor Lieberman.

But Lieberman stunned Israelis late Monday by announcing that he was abandoning Netanyahu and taking his 6 seats into the opposition. That left the prime minister entirely dependent on Bennett, with 8 seats, to reach the bare minimum of 61. And as midnight Tuesday approached, Bennett was nowhere to be found. News reports said he’d “gone underground.”

Netanyahu’s troubles with Bennett and Lieberman reflect a combination of slights and grudges that have made the negotiations far more arduous than anyone anticipated. For one, he scraped out a victory in the March 17 election through a last minute appeal to loyalists of smaller right-wing parties — mainly Bennett’s but also Lieberman’s — to cross over and back him, in order to prevent a government of the left. That assured him the largest Knesset bloc but helped reduce Bennett’s and Lieberman’s parties to shadows of their former selves.

Second, he left Bennett and Lieberman for last in the coalition negotiations, apparently assuming that as his closest ideological allies they’d be certain to join when the time came. Beyond the personal slight they felt, he managed to infuriate Bennett and Lieberman by signing away assets they coveted to the other parties — control of certain government agencies as well as promised legislation that the ultra-Orthodox favor and Bennett and Lieberman oppose.

Third and not least, both Bennett and Lieberman have long histories of bad blood with Netanyahu that the last month has only exacerbated. Both served in the past as his personal chief of staff — Lieberman in 1996-97, when Netanyahu first became prime minister, Bennett from 2006 to 2008, as Netanyahu was preparing to return to the top slot — and both quit on notoriously bitter terms. The prime minister is now learning the truth that Jimmy Durante once taught: Be careful who you kick on your way up, because they’ll kick you back on your way down.

For all these reasons, neither Bennett nor Lieberman is inclined to do Netanyahu any favors. Lieberman was angry enough to walk away into the political wilderness as a minor opposition party rather than help Netanyahu hold onto power. How far Bennett will push is anybody’s guess as of Tuesday night.

Through party allies, Bennett was releasing an escalating series of demands Tuesday night as his price for signing on. Mostly they involved control of key ministries that Netanyahu was reluctant to concede, initially defense, then foreign affairs and justice. In part this was because of the ministries’ high political and policy value, far beyond the political strength Bennett had earned at the ballot box.

Compounding the insult, Bennett claimed that Netanyahu had promised him the defense ministry during the election campaign, as part of a pact not to attack each other but to focus on the left. Post-election, after Netanyahu had slashed Bennett’s parliamentary strength by one-third, Likud aides declared that the deal was off because Bennett hadn’t earned enough seats to merit the plum job.

In part, too, Netanyahu’s hard line on Bennett’s demands was due to a seldom-noticed aspect of his political makeup: an extreme reluctance to lock himself into far-right positions that would destroy his ties with America and the West.

Bennett’s alliance with the settler movement and open dismissal of the two-state solution make him a problematic choice as Israel’s chief diplomat. No less problematic would be his choice for justice minister, Ayelet Shaked, one of the Knesset’s most strident critics of civil liberties and minority rights.

On the other hand, Netanyahu may see himself as having no other choice but to give in on at least one of those demands. The more likely concession would be making Bennett foreign minister, since the position has less concrete decision-making power and is more easily marginalized than Justice, as countless Israeli foreign ministers have learned in the past.

Among the alternatives to a concession would a last-minute appeal to the Zionist Union, the center-left alliance of the Labor Party and Tzipi Livni’s Hatnuah, to join Netanyahu in a national unity government. Labor leader Isaac Herzog has been careful not to dismiss that possibility in recent weeks and hasn’t criticized Netanyahu’s concessions to the ultra-Orthodox and the right during the coalition negotiations, presumably in order to leave open the possibility of joining a Netanyahu cabinet. If he remains in opposition he’s almost certain to face a leadership challenge in a year, which he’d likely lose.

Labor’s bylaws require a primary within 14 months of a general election if the party loses, which it usually does. In consequence, Labor has had no fewer than eight leaders in the past 15 years since it last held power.

Another option, though untested and risky, would be for Netanyahu to go to the president Wednesday night and say he was ready to present a government to the Knesset the following Tuesday, as required by law, gambling that in the interim he could somehow resolve his dispute with Bennett.

The third possibility is that Netanyahu declares failure and the president picks someone else, most likely Herzog, to try and form a government. The new candidate would then have 28 days to try and negotiate a coalition. If he or she fails, the Knesset has a week to try and pick a prime minister on its own. Failing that, Israelis go back to the ballot box.

It’s seldom discussed in the afterglow of Netanyahu’s election win, but while it’s true that he scored a personal triumph, it’s not true, despite frequent claims on the right, that the Israeli voters gave a mandate to the political-nationalist right. In fact, while some parties are hard to pigeonhole, the right lost about three Knesset seats overall to the left and went from a bare majority to a slim minority. Netanyahu’s governing majorities, both last time and this time, depend on an alliance of his right-wing bloc, with about one-third of the Knesset, and a fraction of the center-left and ultra-Orthodox that would back a two-state accord tomorrow if it were offered but have other, more immediate priorities. That’s a major factor behind Netanyahu’s current difficulty closing a deal.

If Herzog got the nod, he’d face many of the same hurdles that have stymied Netanyahu. He’d replace the 14 right-wing seats of Jewish Home and Yisrael Beiteinu with the 16 liberal-left seats of Yesh Atid and Meretz. But he’d still have to recruit the three parties Netanyahu has already brought on board, namely the two ultra-Orthodox parties and Kulanu, the moderate, middle-class economic reform party led by onetime Netanyahu ally Moshe Kahlon.

None of the three would have a problem with Labor’s left-leaning economic and foreign affairs policies. But the ultra-Orthodox have serious objections to Yesh Atid, which led the reforms in marriage, conversion and rabbinical authority during the last Knesset that Netanyahu has now agreed to roll back.

In fact, most of those reforms were strongly backed by Lieberman, whose party base is mainly Russian immigrants, and Bennett, whose party represents a modern Orthodox constituency that has chafed under the growing influence of the fundamentalist ultra-Orthodox. Indeed, Netanyahu’s agreement in coalition negotiations to roll back the reforms is a major factor in the troubles he’s now facing with Lieberman and Bennett. Still, Lapid has become the symbol of those reforms and the main focus of ultra-Orthodox hostility.

On the other hand, Herzog would have an easier time than Netanyahu has had in at least two respects. For one thing, none of his negotiating partners bears anything like the personal grudge they bear toward Netanyahu. For another, Israel has been without a functioning government for more than a month, and folks are getting antsy.

As Coalition Deadline Nears, Bibi’s Choices Are All Bad