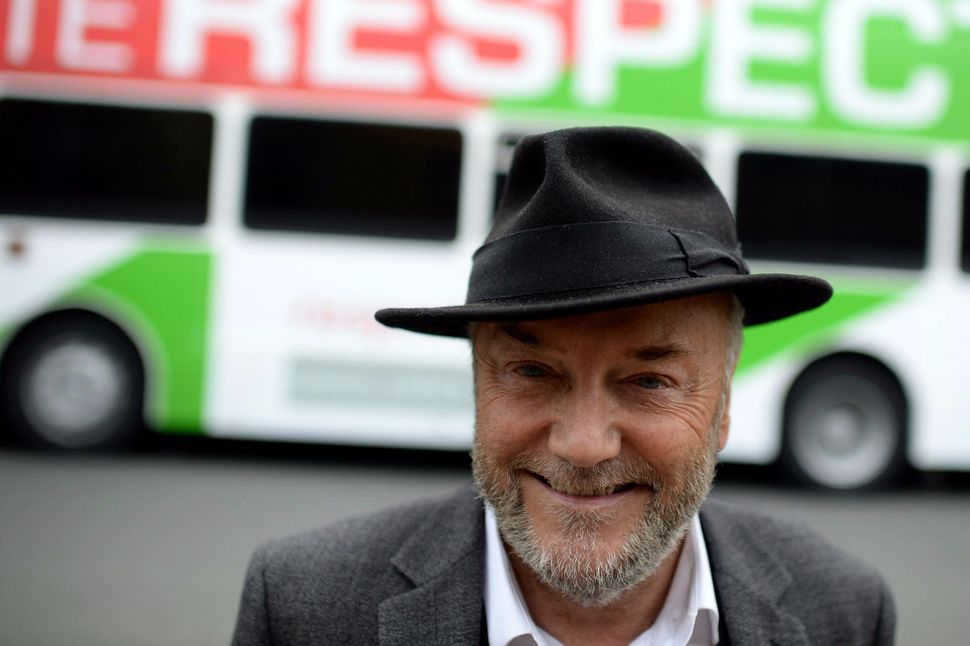 Between the prospect of the break-up of the United Kingdom and five more years of Conservative-led austerity, there wasn’t much good news in the British election results.

Except, that is, in Bradford.

After an ugly campaign, the infamous and indefatigable George Galloway, who made headlines for declaring the down-on-its-luck northern town an “Israel-free zone,” lost his bid for reelection. The former Big Brother reality TV contestant was not just beaten by a Labour Party candidate — he was trashed by almost 30 percentage points.

Just three years after a by-election victory he would call the Bradford Spring, Galloway was humiliated and sent packing, presumably in search of another community to divide and exploit. The evening began with the news that Galloway had been reported to the police for an alleged breach of electoral law. It turned out he had retweeted an exit poll reporting his supposed victory in Bradford West before 10 pm on election day – an illegal act.

“It’s a storm in a thimble,” his spokesperson said. Evidently the authorities disagreed, and a man whose censorship of opponents on Twitter is prolific was undone by a lackadaisical retweet.

When the result was announced, his opponents in Bradford West finally had their revenge. With Galloway standing behind her on the platform in a black shirt, black jacket, and now-signature black fedora – an outfit more befitting of a mobster than a politician – his opponent, Naz Shah, didn’t mince her words in her victory speech.

“Your campaign demeaned our democracy,” she said. “Personal attacks on me have not worked. The people of Bradford West have seen through this and you have been sent on your way.” For Shah, a mental health campaigner, the moment was surely even sweeter than for those of us who have longed for Galloway’s defeat for years. During the election campaign, Galloway accused Shah of lying about the age at which she was “emotionally blackmailed” into marrying a cousin in Pakistan. At a town hall debate, he even produced what he claimed was a nikah – an Islamic wedding certification – that he had somehow got from Pakistan proving that she was 16 at the time of this event and not 15 as Shah claimed.

The idea that the age at which one is forced into a marriage matters one way or the other says a lot not only about how Galloway will do anything to win an election but also his attitude towards women. When Shah was done, up stepped George. In a way, his concession speech – if you can really call it that – was a continuation of the rhetoric and atmosphere that has defined his brief but all-too-eventual tenure as the MP for Bradford West, during which he sought to accentuate racial and religious divisions and manipulate the clan politics of the city by playing off the politics of the Middle East. Because of his histrionics, Bradford has “earned a reputation in Britain as unfriendly to Jews” under Galloway, Ben Judah reported, who himself was recently set upon by Respect Party heavies outside a campaign event:

A burly Asian man in a black suit and sunglasses rushes up and grabs me round the neck, pinning me to a low perimeter wall. ‘Get out, you fucking Jew,’ he shouts. I am being throttled as around ten Asian men surround me. My teeth chatter as a man in a tracksuit punches me in the head. … There is no doubt in my mind: These men were Respect supporters.

Having gone so far as to declare Bradford an Israel-free zone and suggest that Zionists (or was it Jews?) would celebrate the election of Shah, the unhinged-sounding Galloway suggested that the Zionists were having the last laugh over his defeat.

I don’t begrudge the Labour members here their moment of celebration of course. But there will be others who are already celebrating: the venal, the vile, the racists and the Zionists will all be celebrating. The hyena can bounce on the lion’s grave but it can never be a lion and in any case, I’m not in my grave. As a matter of fact I’m going off now to plan the next campaign.

The line about the lion and the hyenas comes, incidentally, from a poem written by one Saddam Hussein. I salute Galloway for his courage and strength in quoting the dictator’s verse on the night he met his Waterloo. It’s almost too good to be true.