How American Jews Can Fight the Academic Intifada 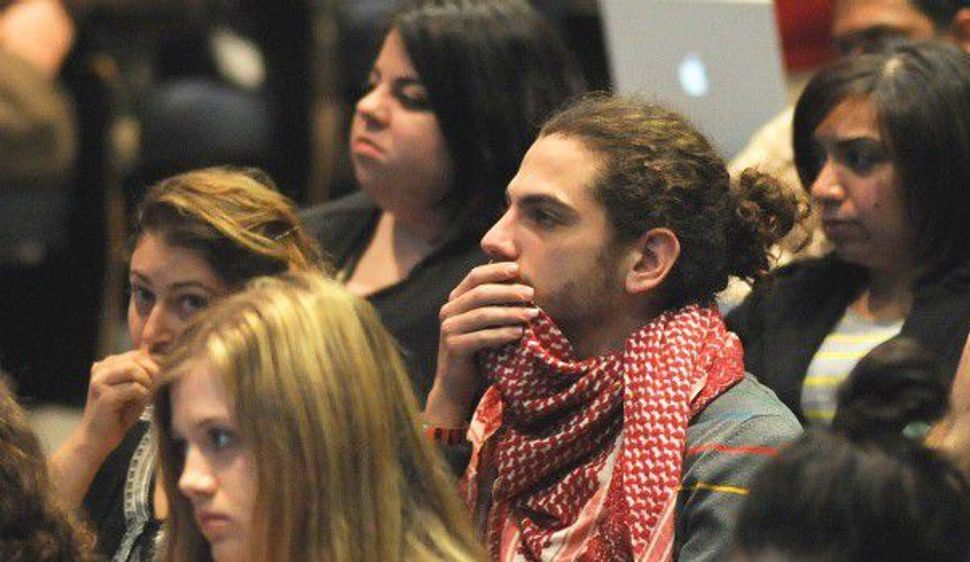 Growing Trend: Pro-Palestinian activists listen at a conference at the University of Pennsylvania. Image by Getty Images

As the New York Times reported this weekend, Israel is under attack. Except, this time, the tools of attack are not military. They are not rockets fired on Sderot from Gaza, or Hezbollah-sponsored salvos from Lebanon. The attacks are not even located in Israel itself.

They are attacks on the very idea of Israel, and the war has come home — to the American college campus. An online survey of 1,157 students, conducted by Trinity College professor Barry Kosmin and associate professor Ariela Keyser, reveals that more than half of American Jewish college students report that they have experienced anti-Semitism on campus.

Just in the last few weeks:

• At UC-Davis, students voted on a resolution to endorse a boycott of Israel — accompanied by cries of “Allah hu-akhbar!” Then a Jewish fraternity was painted with swastikas.

• At UCLA, members of the Undergraduate Student Association argued that a Jewish student, Rachel Beyda, should be denied a position as a justice to the Judicial Board of the Undergraduate Students Association Council. Most people agreed that she was eminently qualified. But she is Jewish, and several of her fellow students made vague references to this being a “conflict of interest, because of her involvement in the Jewish community.” The reason why this should be a conflict of interest? Totally unclear and unstated. Ultimately, Rachel’s candidacy was approved, but the whole incident was, to say the least, unsettling.

• At Stanford University, Molly Horwitz, a candidate for the student senate, faced questions about how her Jewish identity would influence her work on that judicial body.

But, here’s what’s even more frightening.

The singling out of Jews on college campuses is not coming from rednecks, members of the KKK, white supremacists, and other long-time certified bigots.

No. Those attacks are coming from a broad coalition of campus groups that includes black, Latino, Asian, Native American, feminist and gay rights organizations — from those groups that have been and should continue to be our natural allies. Palestinian activists have successfully linked their cause with hot-button issues of police violence and racism, painting Jews as the enemy. They are causing Jews on campus — the majority of whom are white and from relatively prosperous backgrounds — to “check their privilege.”

This is nothing less than an ethnic and class war. It uses Israel and the Palestinians as a backdrop and an excuse, but its target is clear — Jewish students — some of whom capitulate and join the battle against Israel. These verbal and political attacks cannot help but morph into anti-Semitism and anti-Judaism. It does not take an alarmist to wonder aloud if we are yet to see demonstrators in front of Hillel buildings, or activism against those students who go on Birthright programs.

Will our young people be prepared for the conversations that they will encounter this fall, right after they start unpacking their bags in their dorm rooms?

Not if the post-puberty retention rates in Jewish education continue the way they have been — which is to say, dismal. According to some estimates, more than half of our young people finish their Jewish education within hours of their post-ceremony kiddush; other estimates put the number as high as 70% or 80%.

In my past writings, I have bemoaned the fact that Jewish parents tend to go limp about encouraging their kids to continue their Jewish education.

Here is a reason for that continuation that I had not anticipated. When our young people get to college, they will need to intellectually defend the existence of the state of Israel. If we allow our teenagers to leave our homes without that knowledge and values base, they will enter the world without the inoculation they need against the ignorance and hatred that they will encounter. Or, to put it this way: in a world of competing narratives, they need to know and internalize the Jewish narrative.

Jewish educators now need to re-shape and re-brand their programs so that parents and kids alike know that they will learn essential facts and values that will help them lead Jewish lives into their late teens, twenties, and beyond.

A few years ago, I watched a disturbing video, which featured a dialogue between Jewish students and African-American students on an Ivy League college campus. The African-American students berated their Jewish classmates with the now-discredited anti-Semitic canard: “Don’t you know that your ancestors were responsible for the international slave trade?” The Jewish students nodded and wept in agreement; yes, it was true, they said, and yes, they felt guilty about it.

After the video was over, one of the Jewish parents in the audience asked the presenter, a Hillel rabbi: “How can we prevent this sort of thing?” I will never forget his quick and pointed answer: “Stop sending us ignorant Jewish kids.”

That rabbi’s answer still rings in my ears. Let’s be grateful to the noble work that Hillel is doing on campus. But the very least that we can do to return the favor is to send them Jewish students who can tell the story of their people.

Rabbi Jeffrey Salkin is a noted author and rabbi of Temple Beth Am in Bayonne, NJ. An award-winning writer, he blogs regularly at jeffreysalkin.religionnews.com

How American Jews Can Fight the Academic Intifada