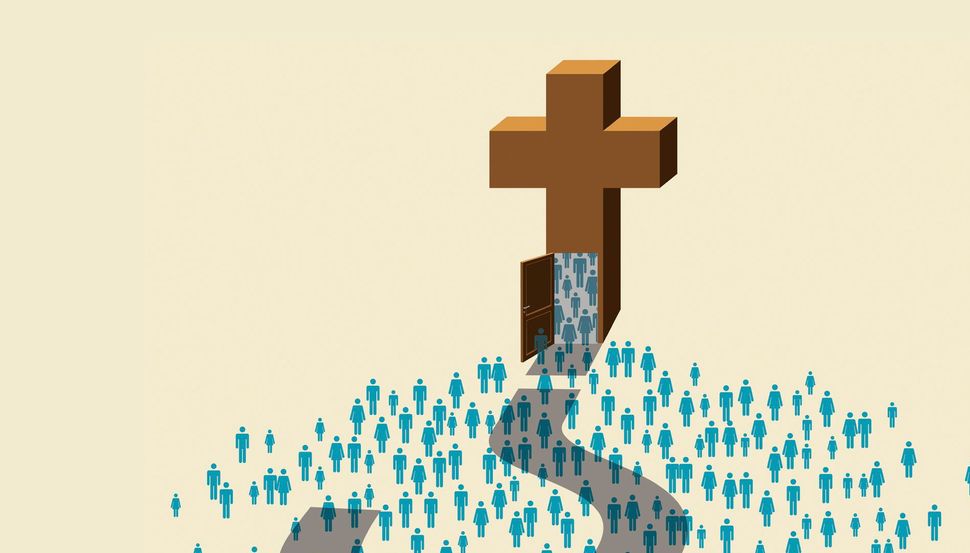 I recently attended a wedding where the bride and groom shared Chinese, American and Eastern European roots. Their parents were raised Catholic, Lutheran and Jewish. But the wedding itself, both ceremony and reception, were completely, utterly, 100% secular. God was not invited; no religious ritual made an appearance.

Welcome to the new America.

I thought this scene might just be representative of my family and circle of friends, but no — it speaks to a broad and deep shift in the American religious landscape, as meticulously catalogued by the report issued today by the Pew Research Center. This survey, conducted in 2014 through telephone calls with more than 35,000 adults, is a follow up to a survey similar in size and scope conducted in 2007.

In the intervening seven years, the share of Americans who identify as Christian has declined by nearly 8%, while the share who claim no religious identity — the unaffiliated or, in demographic parlance, the “nones” — increased by nearly 6%, amounting now to 22.8% of the U.S. population.

There are, according to Pew, now more unaffiliated Americans than either Main Line Protestants or Catholics. If the “nones” were a religious denomination, they would be the second largest in America, just after evangelical Christians. Imagine the political implications if this trend continues — and it is likely to continue, for two reasons.

First, although a majority of Americans still identify as Christian, the decline in their number is widespread, occurring among the young and the old, black and white, well educated and not so well educated, in all regions of the country. Don’t think these numbers are driven by a bunch of disaffected white elites in the Northeast; it’s a broad-based trend.

Second, the unaffiliated skew young and younger. Only 11% of the Silent Generation (born 1928 to 1945) identified as having no religion, while among Younger Millennials (born 1990 to 1996) 36% put themselves in that category.

“It is likely that we will see a secular left coalesce into a movement in the way that 30 years ago we saw the religious right coalesce politically,” David Campbell, political science professor at Notre Dame University, told me. “I am not sure that it will have the same clout because the left lacks a religious infrastructure and it’s more of a challenge to mobilize the troops. But the group and the movement are here to stay.”

That is, from the perspective of a Jewish liberal civic nerd, there is something extremely welcome and extremely worrying about this trend.

The similarities between the headlines in this survey, and Pew’s groundbreaking 2013 survey of American Jews, are both obvious and telling. Just as we found the center dropping out of the Jewish world — with a sharp decline among Conservative Jews — so, too, the Christian center is shrinking, and the ranks of the unaffiliated are growing. Intermarriage across the country has dramatically increased. Ditto in the Jewish world.

At less than 2% of the population, Jews can hardly boast that we are leading the way, but it’s now clear that our shifts echo broader trends in the national religious landscape.

In fact, compared to what’s happening in mainstream Protestantism and Catholicism, we Jews are in pretty good shape. Our share of the population was stable from 2007 to 2014, and — unlike those Protestants and Catholics — our median age did not go up. We scrape the top when it comes to income and education levels, and have a fairly high retention rate.

That is, about 75% of the respondents who said they were raised Jews still identified that way as adults, a percentage only exceeded by Hindus and Muslims. By way of quick comparison: nearly 13% of all Americans are former Catholics.

(Lest we become too self-satisfied, please recognize that the survey released today counts as Jews only people who say their religion is Jewish. The 2013 survey, of which I was an adviser, also included Jews who identified culturally but not religiously.)

All this cheerful news underscores the fact that the United States is becoming a less homogeneously Christian country. The growth of secularism is accompanied by a slight increase in the percentage of adults who identify with other religions — primarily Islam and Hinduism. For those of us who believe that America’s embrace of pluralism, its constitutional resistance to an established religion, its ability to separate private faith from public commitment are all abiding strengths, then this trend is welcome, indeed.

It helps explain the political gap between most Americans and Christian conservative leaders, Republicans especially, on issues like abortion, gay rights and capital punishment. No wonder these leaders act as if they are worried that the nation is abandoning the true faith. When it comes to their true faith, it is.

But this is no time for liberals to gloat. There are demonstrable civic downsides to an increasingly secular citizenry. The survey of American Jews showed that the unaffiliated and intermarried are less likely to join a synagogue, give to Jewish charity, educate their children Jewishly, connect to Israel, feel an obligation toward their fellow Jews — in short, are less likely to care about the Jewish community and its continuity.

Sadly, those behaviors are reflected in the population as a whole. Religious affiliation has long been an engine for civic involvement, charitable giving and political activism, from the right and from the left. So many of the magnificent social movements that have elevated American society were propelled by religious sensibilities and the vocabulary of faith. We lose that language at our peril.

It’s important to remember that these trends, for good or for ill, do not occur in a vacuum. Campbell, who directs the Rooney Center for the Study of American Democracy at Notre Dame, has analyzed the political consequences of the growth of the “nones” and found something surprising.

I had always assumed that political identity grew out of religious identity. If you are drawn to an evangelical church, you’d likely adopt evangelical politics, and so forth. But Campbell argues that the new “nones” have changed their religion to match their politics, especially in response to political stands couched in religious rhetoric that they find objectionable. In other words, an allergic reaction to politics can lead to a rejection of religion.

“The causal arrow runs in both directions,” he wrote in a recent paper.

One way to counter the growth of secularism, then, is to respect the potentially toxic consequences of mixing political talk with God talk. “If more religious leaders are able to recognize the risks that come from flying too close to the religious flame,” Campbell said, then maybe the “nones” would not be fleeing the church in such numbers.

This message needs to be broadcast in high fidelity sound to the Jewish community, particularly in terms of what is often our “God talk” — allegiance to Israel, or more precisely, to the current Israeli government. We could be inviting the same disaffection from Jewish communal life that Campbell identified by so closely turning support for Israel into a partisan, Republican article of faith.

The politicking from the pulpit that has accelerated in the last few years could not only splinter American Jews politically. It could weaken our faith communities, as well.