“While I am heartened that you appreciate the works of Woody Allen and Barbra Streisand, I think you’ve confused cultural Judaism with committed Jewish belief.”

So says the Rent-a-Rabbi in OITNB’s season 3, episode 9, tantalizingly titled “Where My Dreidel At.” (If your binge watching hasn’t carried you this far yet, be warned: spoilers ahead!)

In this scene, the rabbi is addressing one of the many prisoners at Litchfield who have decided to identify as Jewish as a ploy to get tasty kosher meals. His job is to suss out who’s a real Jew and who’s faking. Cindy, who has just tried to sell him on a version of her childhood that is half “Annie Hall,” half “Yentl,” is, ahem, faking.

But I do think the rabbi’s line here is pretty problematic. He speaks as if (a) cultural Judaism and committed Jewish belief are mutually exclusive, (b) the former is inferior to the latter, and (c) only the latter should be able to score you kosher food. Why, though? 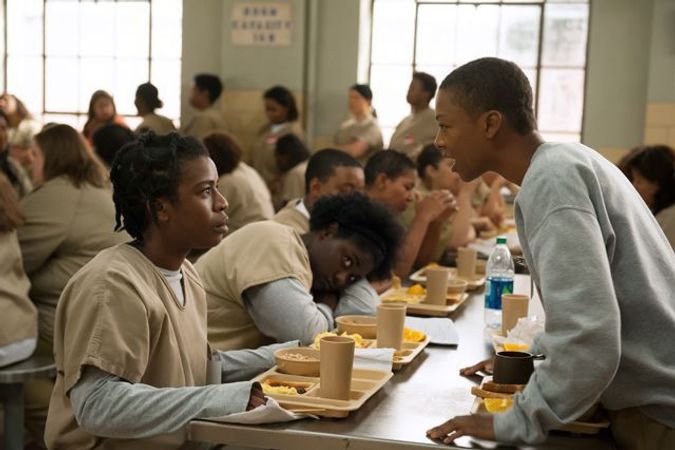 Fact is, you can identify as culturally Jewish — someone who loves “Annie Hall,” say, but has no interest in observing Shabbat — and still be dead-set on keeping kosher. This is actually what Judaism looks like for many of my friends: not an all-or-nothing thing, but a series of conscious choices to maintain X tradition (say, no pork) while foregoing Y or Z.

It’s one of the major upshots of viewing Judaism as a culture as opposed to a religion: a culture is something you can pick and choose from, emphasizing and de-emphasizing various elements without guilt; a religion is a whole other megillah.

There are lots of different reasons why you might adopt this approach. You might steer clear of pork, for example, not because you believe that’s the one rule handed down by God, but because the particular historical valence it’s accrued made it very important to your parents and, by extension or osmosis, to you. Or you might ignore all the holidays but make a point of holding a Passover Seder each year — again, not because you think that holiday has some special validity that the others don’t, but because it sets up a language, a symbol system, that you find useful for reflecting on freedom and slavery in your own life.

For my part, I think any prisoner who has a sincere belief that she or he needs a kosher meal should get one — regardless of whether they pass some Orthodoxy test. Likewise, any prisoner who wants a halal meal should get one — even if they don’t obey every other rule of Islam. It’s not the state’s job to police the religious practice, or the theology, of its citizens.

Related: Is ‘Orange Is the New Black’ Anti-Semitic?

By the way, it’s interesting to note that the one Litchfield prisoner who passes the rabbi’s test is Sister Ingalls, the nun. She kills it in that interview, thanks in large part to her intimate knowledge of the Bible, from which she quotes an obscure verse (Isaiah 53:1) verbatim. As she later explains to her jealous fellow prisoners: “The Abrahamic-based religions are all very similar, up until Jesus.”

But I think maybe there’s another factor that helps her ace the test: her whiteness. She doesn’t raise the rabbi’s eyebrows the way Cindy does. Faced with the African-American prisoners, the rabbi gingerly asks questions like “Were you raised Jewish?” You can tell that for him the idea of a Black Jew is, at the very least, grounds for suspicion. But hey, that’s subtext.